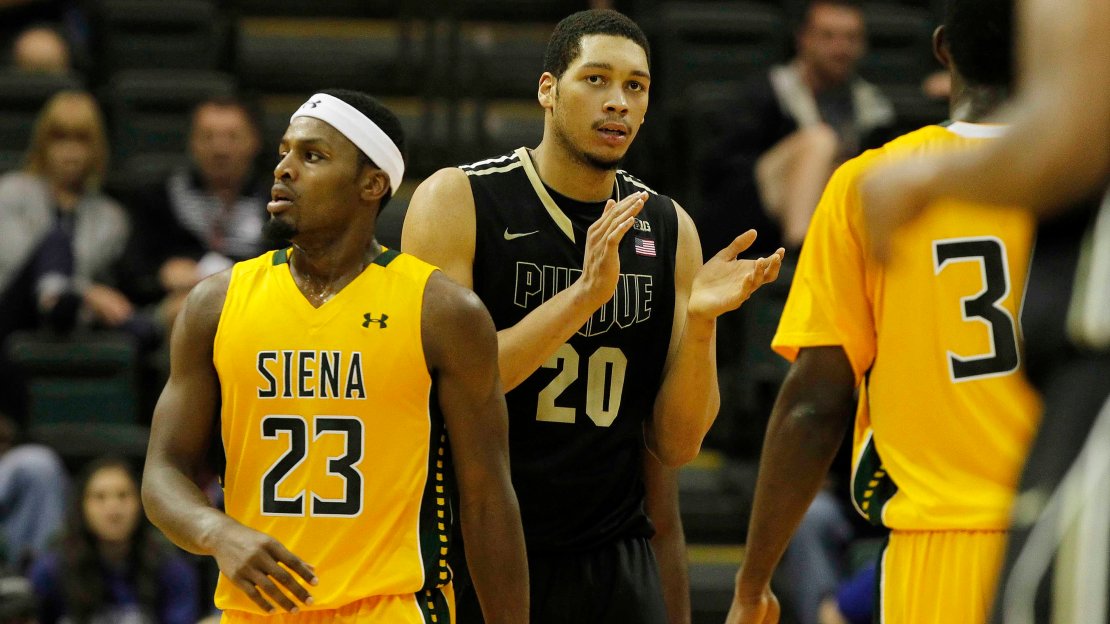 It was while watching a Purdue team fall to Nebraska in the first round of the Big Ten Tournament last year that I assured my colleague, Tom Dienhart, that the Boilermakers were simply in a rebounding season. They would be back next year, I told him, and I had no reservations about that.

And why wouldn?t they be? The team returned a little over two-thirds of last year?s minutes, and last year wasn?t all that bad. Sure, it wasn?t up to Matt Painter?s usual standards, but the team was a significant upgrade over the likes of Northwestern, Penn State, and, yes, that same Nebraska team that ended up taking the Boilers out in the Big Ten Tournament. Not only that, but the team was mediocre largely because it had to rely on a lot of freshmen minutes, and most of those freshmen (save for the freshman in name only, Donnie Hale) would be returning this season. And a team with a lot of sophomores usually improves a lot.

And frankly, had I known what I know now about the incoming freshman class-namely, that Bryson Scott is legitimately in the running as the conference?s best freshman-I?d be even more confident in my prediction that Purdue would return to the Dance this season.

No more. Tom, I was wrong. This Purdue team is bad. I was willing to overlook a too-close game against a terrible Northern Kentucky team to open the season (A.J. Hammons was missing!), and a too-close game against a terrible Rider team (A.J. Hammons was rusty!). But now? After a 15-point beatdown at the hands of a mediocre Washington State team? And then following it up a last-minute comeback win over woeful Siena? Sorry, can?t do it.

Sure, A.J. Hammons is part of the problem. He?s played nothing like the NBA prospect he?s supposed to be (against WSU-which has a pretty bad interior defense-Hammons managed to get all of one field goal attempt, and went scoreless). But let?s not forget that Hammons returned from a suspension, not a torn ACL. This has gone on long enough that it?s fair to question whether last year is somewhat of a mirage, and whether he?s heading for a sophomore slump. The good news is that Hammons would be a very good player this year were it not for the fact that he turns the ball over as often as he makes a shot (so, other than that, how did you enjoy the play, Mrs. Lincoln?).

But Hammons isn?t the only problem. Indeed, his backup, Jay Simpson, has provided solid production out of the center position. So Purdue is still getting close to what it could have expected from the five, at least offensively. Instead, the problem has been too few rebounds on defense, and too many bricks on offense.

As to the former, a remedy might be to try putting Hammons and Simpson on the floor at the same time. As to the latter, Painter needs Raphael Davis and Sterling Carter to either start making shots, or work on their cheerleading skills.

However the fix comes, I?m confident it will require more than patiently waiting for the team to awake from its doldrums. This team has been too bad, and is too talented, for there not to be a substantial problem with the current approach. But right now, this looks like a team that?s more likely to finish at the bottom of the Big Ten than make the Tournament.

Speaking of unspectacular starts, Illinois has not looked great over this past week, eeking out wins over UNLV and IPFW. The good news is that at the end of the day, they were both wins. And for that matter, our expectations for Illinois were slightly below those for Purdue this season. So it's really not fair to call the Illini a disappointment at this point in the season. But Purdue's nosedive presents an opportunity of sorts for Illinois to sneak into that middle tier of Big Ten teams.

So far this year Illinois has been outstanding defensively (especially in the paint), and great on the offensive glass as well. Maybe it?s a coincidence, but those are numbers that can also simply indicate bigger and superior athletes dominating an opponent physically. And it?s worth mentioning that Illinois has played the weakest schedule in the Big Ten so far, with no opponent having a higher Pomeroy rating than 140 (Valparaiso). And Illinois? mid-December matchup against Oregon will be its first against a top-100 opponent. All of this is to say that I don?t know if we?ll really know whether Illinois is any good-and what the team is good at doing-for at least a couple more weeks.

Penn State is proving some doubters wrong-myself included-with a win over St. John?s. Coming into the season, I figured the absence of Jermaine Marshall would require D.J. Newbill to continue to be a high-usage player, a role he was not well-equipped for. Well, I was right on the first point-Newbill is being counted on for a lot of possessions this year (25.6 percent of them while he's on the floor, to be exact). But he?s been very efficient, to my surprise. Newbill is making 55 percent of his 2s, and 46 percent of his 3s. He won?t sustain those numbers all season, but it?s enough-along with his slashed turnover rate-to convince me that he?s taken a big step this season. Penn State isn?t going dancing this year, but it?s also no pushover.

The team of the weekend was Iowa. After taking care of business against Xavier, the Hawkeyes opened up a big lead against Villanova before falling in overtime. Despite this loss, I think this is a positive weekend for Iowa. The Hawkeyes lost in large part to foul trouble, and it?s easy to characterize the cumulative disqualifications of Aaron White, Mike Gesell, and Zach McCabe as a one-off event (especially in White?s case, as he?s one of the least foul-prone players in Division I).

Still, even with the Hawkeyes playing some of their best basketball in years, Roy Devyn Marble is really carrying a ton of the offense (attempting 32.5 percent of Iowa?s shots while on the floor, in addition to providing the highest assist rate on the team). While he?s still been very good at that usage, it?s not like this team bears a resemblance to last year?s Ohio State squad-cleverly coined Deshaun of the Dead by mgoblog-which had little scoring potential outside of Deshaun Thomas. Iowa has other options, so why not use them? And given his assist rate, no one can accuse Marble of being a ballhog. But it wouldn't hurt if some of his teammates pulled the trigger a touch more often (Mike Gesell and Anthony Clemmons, I'm looking in your general direction). But even in its current form, Fran McCaffrey?s team looks every bit the Big Ten title contender I figured it would be.

This week is Challenge Week! The Big Ten hasn?t lost this thing since 2008, but last year?s event ended in a disappointing tie. This year, Pomeroy is predicting a 7-5 Big Ten win. Sounds about right, though I?m not feeling great about that projected Purdue win over Boston College right now.

We'll have a full breakdown of all of the Challenge games a little later on, so stay tuned.