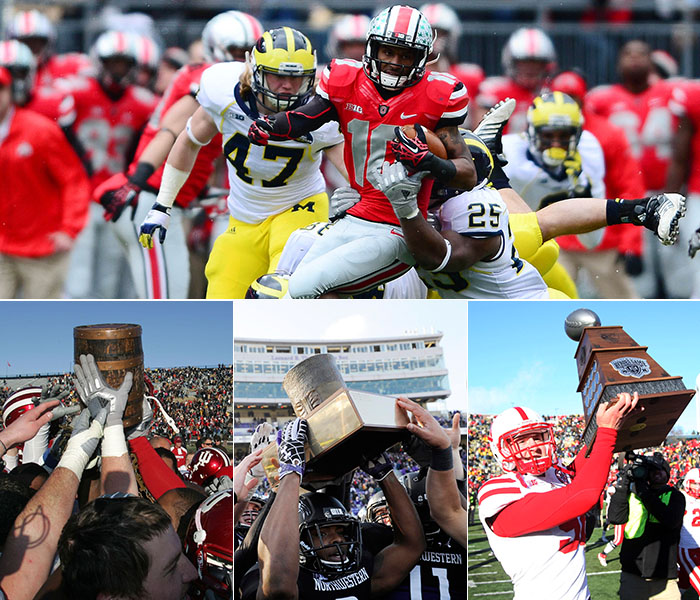 The final week of the season is upon us. Even better: It?s rivalry week. There?s Ohio State at Michigan in ?The Game.? Northwestern is at Illinois in the Land Lincoln Trophy game. Purdue is at Indiana in the battle for the Old Oaken Bucket. Iowa is at Nebraska in the ?Heroes Game.? Here is a look at all the action of Week 14.

Why you should watch: This essentially could be a playoff game to see who goes to the Outback Bowl. The loser likely would land in the Buffalo Wild Wings Bowl. Each team comes in with some mojo. Nebraska scored an overtime triumph at Penn State, while Iowa dumped Michigan for a third time in a row at Kinnick Stadium and has won three of its last four games. The Huskers have won five in succession in the series. The Hawkeyes haven?t scored more than 13 points in any of those five games. In fact, Nebraska has outscored Iowa, 159-41, during the five-game winning skein, winning by an average score of 32-8.

Player on the spot: Ron Kellogg III. He took over early last week in a 23-20 overtime win at Penn State for Tommy Armstrong, Jr., (who is questionable this week with an ankle injury) and excelled, hitting 20-of-34 passes for 191 yards and a touchdown. Kellogg isn?t the runner Armstrong is, but he?s a better passer and has more overall savvy. Kellogg will need to pass with some aplomb to go after a vulnerable Iowa secondary. If the Huskers can?t pass, it will make running for Big Ten rushing leader Ameer Abdullah vs. a rugged Hawkeyes front seven very difficult. Iowa has the No. 5 rushing defense in the Big Ten (123.6 ypg).

Key matchup: Iowa offensive line vs. Nebraska defensive line. The Hawkeyes have a big, physical front that paves the way for the No. 5 rushing attack in the Big Ten (191.5 ypg). And Mark Weisman is running strong after a midseason funk. He ran 17 times for 88 yards vs. Michigan last week (5.2 ypc), his highest total since Sept. 28. Nebraska?s rushing defense has been spotty, ranking No. 8 in the Big Ten (161.6 ypg). If Weisman and the other Iowa backs get cranked up, the Husker defense will be in trouble. And that will make life much easier for Iowa quarterback Jake Rudock.

Key number: After winning four games a year ago, Iowa is 7-4 and one of eight BCS conference teams to have improved by three victories or more from a year ago.

Why you should watch: Neither team can go to a bowl, so this one is all about pride. The Fighting Illini have lost three of the last five meetings and seven of the last 10 to their in-state rival. Tim Beckman has made beating NU a point of emphasis. After a 4-0 start, the Wildcats will be looking to end a seven-game losing streak that?s among the most confounding things in the nation. The Fighting Illini will enter the game with a glide in their step, as they ended a 20-game Big Ten losing skid last week at Purdue. Now, Illinois is looking for its first league victory in Memorial Stadium since beating Northwestern 38-35 on Oct. 1, 2011.

Player on the spot: Northwestern DE Tyler Scott. He and his linemates must get after Illinois quarterback Nathan Scheelhaase. If the Illini signal-caller is able to get rolling, the Wildcats and their No. 9 Big Ten defense (417.2 ypg) will be in trouble vs. what is a good Illinois offense that features hot wideout Steve Hull.

Key matchup: Northwestern running backs vs. Illinois defensive line. The Wildcat ground game has struggled, as the line has had issues getting a consistent push. And losing Venric Mark to injury also has hurt. NU will face an Illinois defense that?s just No. 11 in the Big Ten vs. the run (247.0 ypg). The Wildcats have the No. 9 rushing game (174.8 ypg). The winner of this clash may win the game.

Key number: Illinois QB Nathan Scheelhaase is the only active player in the nation with over 8,000 passing yards and 2,000 rushing yards. He and former Illini Juice Williams are the only two players in Big Ten history to reach those benchmarks in their careers.

Why you should watch: The Spartans already have wrapped up the Legends Division, so there isn?t anything on the line but a loss could hurt their bowl pecking order slot. And Michigan State would like to enter the Big Ten championship game on Dec. 7 with some momentum. Minnesota? It?s playing for bowl positioning. A win coupled with a loss by Michigan to Ohio State may get the Gophers to the Gator Bowl. Michigan State has won three in a row vs. Minnesota. Before that, the Golden Gophers won three in succession vs. the Spartans.

Player on the spot: Minnesota QB Philip Nelson. No way, no how do the Golden Gophers stand a chance vs. this strong Michigan State defense without generating some sort of passing attack. The Spartans will stack the box, trying to take away the Minnesota run with a rushing defense that ranks No. 1 in the Big Ten (59.4 ypg). Gophers running back David Cobb had just 67 yards rushing last week in a loss vs. Wisconsin, ending his sting of 100-yard rushing games at four. Minnesota?s passing game? It?s last in the Big Ten (143.4 ypg). Some passing will be needed to loosen that rugged MSU defense. Losing to wideout Derrick Engel last week to a knee injury hurt Minnesota.

Key matchup: Michigan State RB Jeremy Langford vs. Minnesota front seven. Langford has emerged as one of the Big Ten?s top backs. He ran 25 times for 150 yards and two touchdowns last week at Northwestern, making it six 100-yard rushing games in a row. The Gophers are seventh in the Big Ten vs. the run (151.5 ypg). The Badgers ran for 197 yards vs. Minnesota last week, as James White had 125 yards. The Gophers must slow Langford, or Connor Cook becomes that much more effective.

Why you should watch: Penn State is trying for a seventh victory, which would make in back-to-back winning season in Bill O?Brien?s first two years on campus. Amazing, considering the circumstances he has had to deal with. The Badgers are motivated by revenge for last year?s loss in overtime in State College. Even more motivating: A BCS bowl. Wisconsin needs to win to stay in contention for at-large slot.

Player on the spot: Wisconsin RB James White. It could be Melvin Gordon. The Badgers need to get their high-voltage rushing attack in gear. The rushing game ranks No. 2 in the Big Ten (297.8 ypg), an overpowering force that can take over a game. Defense hasn?t been a strong suit for Penn State, which has the No. 6 rush defense in the league (146.2 ypg). If the thin Nittany Lions can?t slow down White and Co., they will have no shot to win. White is No. 3 in the Big Ten in rushing (1,281); Gordon is No. 2 (1,375). They have combined for 25 touchdowns.

Key matchup: Penn State offensive line vs. Wisconsin front seven. The Badgers defense hasn?t gotten enough plaudits, as coordinator Dave Aranda and his 3-4 scheme have been outstanding. Wisconsin is No. 2 in the league in total defense (278.5 ypg) and is especially good vs. the run, ranking No. 3 in the Big Ten (99.1 ypg). Penn State needs to get Zach Zwink on a roll behind its strong line. He has run for over 100 yards in each of the last three games, totaling 448 in that span. If he can run, that would make things easier for precocious quarterback Christian Hackenberg and the pass game.

Key number: The Badgers are 6-0 at home this season and have outscored their opponents by an average of 35.2 points per game at Camp Randall Stadium. They have allowed just three touchdowns at home this season, tied with Alabama for the fewest in the country.

Why you should watch: It?s known simply as ?The Game.? Ohio State is looking to punctuate a second 12-0 season in a row with a win. The last time the Buckeyes lost? It was in Ann Arbor in 2011. A victory also will keep Ohio State?s BCS title game hopes alive. The Wolverines have lost four of their last six games in a season that has been a disappointment. But, no doubt, a win vs. Ohio State would ease the pain for Michigan fans and give the team a boost heading into the postseason. The Wolverines have been on the short end of this series lately, dropping eight of the last nine.

Player on the spot: Ohio State RB Carlos Hyde. Yes, Braxton Miller is special. But Hyde really makes things go. The guy has been a workhorse down the stretch, carrying 138 times for 1,064 yards and 13 TDs. And he averages a robust 7.7 yards per carry. And remember: He has missed three games due to suspension and played briefly in two others. If Hyde can hammer a Michigan defense that is No. 5 overall (353.0 ypg) and No. 2 vs. the run (95.3 ypg), the Buckeye attack will be very difficult to stop. Know this: OSU?s offense is No. 1 in the league (530.9 ypg) and No. 1 in rushing (314.7 ypg).

Key matchup: Michigan offensive line vs. Ohio State defensive line. The issues for the Wolverine front are well-documented, as the interior of the line has really struggled. As a result, Michigan is No. 11 in the Big Ten in rushing (128.8 ypg). So, honestly, it really hasn?t mattered who has run the ball: Fitz Toussaint, Derrick Green ? the holes just haven?t been there. Bad news: Ohio State is No. 2 in the Big Ten in rush defense (95.3 ypg).

Why you should watch: Neither team will be going to a bowl. No matter. The Old Oaken Bucket will be on the line. Win this, and it makes the offseason a bit more bearable. The Hoosiers need to turn the tide vs. rival Purdue. Indiana has lost four of the last five meetings, and is 3-13 in the last 16 meetings. One win came in a driving rain storm (2001); another on a last-second field goal (2007); the third took overtime (2010).

Key matchup: Indiana receivers vs. Purdue secondary. This looks like a Titanic mismatch, as the Hoosiers have a fleet of deadly pass catchers led by Cody Latimer, Kofi Hughes and Shane Wynn. And Ted Bolser is one of the nation?s top tight ends. It will be fun to watch Purdue corner Ricardo Allen matchup with some of these guys. He?s the lone Boilermaker defender who has ?brought it? week in and week out in this dreadful season. Still, he?ll need help to slow down this crew of pass catchers that paces the Big Ten?s No. 1 passing attack (308.1 ypg). No school has allowed more passing TDs than Purdue (21). You thinking what I?m thinking?