Best of Week 12: All eyes on MSU-Nebraska 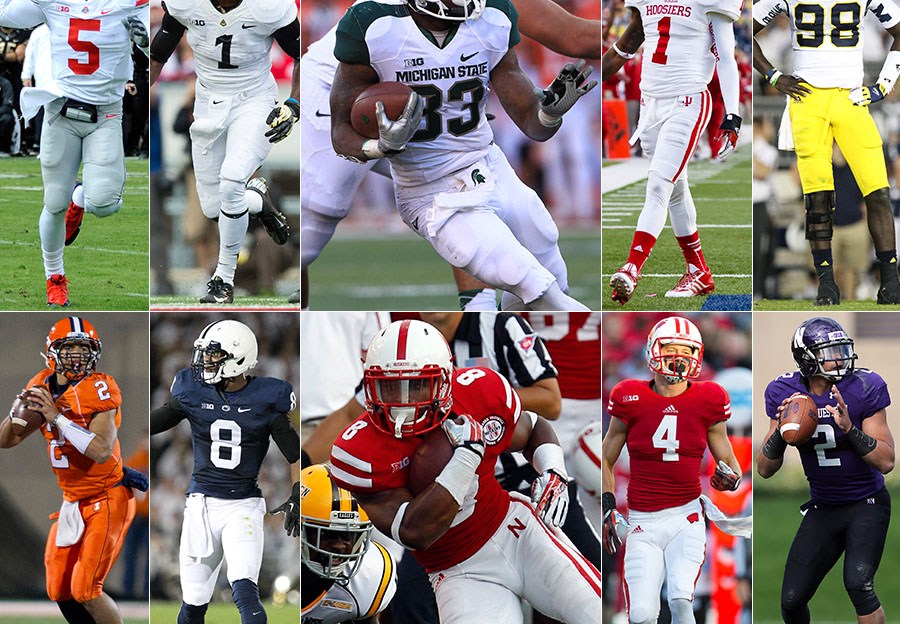 An interesting Saturday of action is headlined by what could be the Big Ten Game of the Year: Michigan State at Nebraska. Ohio State will look to remain unbeaten when it plays at Illinois. The Buckeyes have owned Illinois, winning the last five meetings and eight of the last nine. The lone Fighting Illini victory in that stretch was when they stunned No. 1 Ohio State in Columbus in 2007 on the way to the Rose Bowl. The Buckeyes haven?t lost in Champaign since 1991.

Michigan (two losses in a row) plays at Northwestern (five losses in a row) in a game between struggling teams. Who is going to get off the mat? Iowa and Minnesota are off. Here?s a look at the Best of Week 12.

BEST GAME: Michigan State at Nebraska. This is a de facto Legends Division championship game. The battle within the battle will be the Spartan defense vs. the Cornhusker offense. With Taylor Martinez out, big plays have been difficult to come by for the Huskers. Behind Tommy Armstrong Jr., Nebraska's offense may have issues scoring much on the killer MSU defense. The Nebraska defense has played better in recent weeks, limiting Michigan to 175 yards and Northwestern to 326. Will an ever-improving Spartan offense have success? Don?t expect many points in this game, which could be decided by special teams and turnovers. For what it?s worth, Nebraska is 7-0 all-time vs. Michigan State. The Huskers staged a rally last season to win in East Lansing, 28-24. Nebraska sat on MSU in Lincolin in 2011, taking a 24-3 decision.

UPSET ALERT: It?s a long shot, but Wisconsin could get flipped over by visiting Indiana. But history tells us the Badgers should not just win, but they should crush the Hoosiers. Wisconsin has won the last eight meetings, and 14 of the last 16. The Hoosiers? lone victories came two years in a row, 2001-02. During this run of dominance, Wisconsin has scored over 50 points on Indiana seven times. No one soon will forget the 2010 game won by the Badgers, 83-20. But, if the Badgers commit several turnovers and fall behind, having to play catch up with the prolific IU offense, things could get interesting at Camp Randall Stadium.

MUST WIN: Northwestern needs to topple visiting Michigan. The Wildcats have lost five in a row and need to win two of their final three games to become bowl eligible and extend the program?s postseason skein to six seasons. Michigan also is reeling, losers of two in a row. The Wildcats lost a 38-31 overtime heartbreaker last season in Ann Arbor, as Michigan completed a miraculous 53-yard pass in the waning moments to set up a game-tying 26-yard field goal with two seconds left to force overtime. The Wolverines won it from there. Since beating Michigan back-to-back in 1995-96, Northwestern has gone 2-10 vs. the Wolverines.

QUARTERBACK MATCHUP TO WATCH: Before the season started, I didn?t think I?d pick Illinois? Nathan Scheelhaase vs. Ohio State?s Braxton Miller. But this is the best QB clash of Saturday. Since coming back from a knee injury, Miller has been playing lights out. In the last five games, he has hit at least 58 percent of his passes for a high of 252 yards vs. Penn State. And in that span, he has 13 touchdown passes and just two picks, ranking No. 1 in the Big Ten in passing efficiency. Scheelhaase paces the Big Ten in passing yards per game (268.9 ypg). The senior has thrown for a conference-high 2,420 yards with 15 TDs and a completion percentage of 65.2.

PLAYER ON THE SPOT: Nebraska QB Tommy Armstrong, Jr. With Taylor Martinez out, Armstrong has shown nice signs of development. The redshirt freshman is 5-0 as a starter this season, doing most of his damage as a passer. But he has yet to see a defense like the one Michigan State will trot onto the field. Armstrong must avoid the big mistake. He has three interceptions at Purdue and at Minnesota. On the season, he has five touchdown passes to six picks, hitting 55 percent of his passes. You can count on the Spartans trying to stuff Ameer Abdullah– who leads the Big Ten with 1,213 yards rushing– and the Huskers' run game. That would put the game in the redshirt freshman?s lap. Can he deliver?

KEEP AN EYE ON: The Michigan offensive line. The unit?s struggles have been well chronicled. The group hasn?t been able to get a consistent push all season. The last two games have been particularly gruesome, as the Wolverines have had a mind-numbing minus 69 yards rushing in losses to Michigan State (-48) and Nebraska (-21). Of the 15 scholarship offensive linemen, 10 are in their first or second seasons. The group?s struggles have impacted the skill players, resulting in a struggling offense that ranks ninth overall in the Big Ten (385.3 ypg) and 11th in rushing (135.3 ypg). Another poor effort at Northwestern likely will result in a third defeat in succession for the Wolverines.

BEST COACHING MATCHUP: Let?s go with a clash between defensive coaches in Michigan State?s Mark Dantonio and Nebraska?s Bo Pelini. Are there two more intense coaches in the Big Ten? Of course not. And their meeting in Lincoln, Neb., could be a defensive battle. Dantonio?s ?Spartan Dawgs? are No. 1 in the nation in total defense (210.2 ypg) and No. 1 in rushing defense (43.4 ypg). Pelini?s unit struggled early on, as many young players were worked into the rotation, but the Husker defense finally seems to be coming around and is playing some of its best ball all season.

COORDINATOR MATCHUP TO WATCH: It doesn?t get much better than Nebraska offensive coordinator Tim Beck vs. Michigan State defensive coordinator Pat Narduzzi. In fact, the Cornhusker offense and the Spartan defense are among the best in the Big Ten in their respective fields. The clash between the Nebraska receivers and MSU defensive backs should be epic. How will Beck and Narduzzi counter each other? Beck is handicapped by a banged up unit, especially along the line. Still, he'll have a good plan.