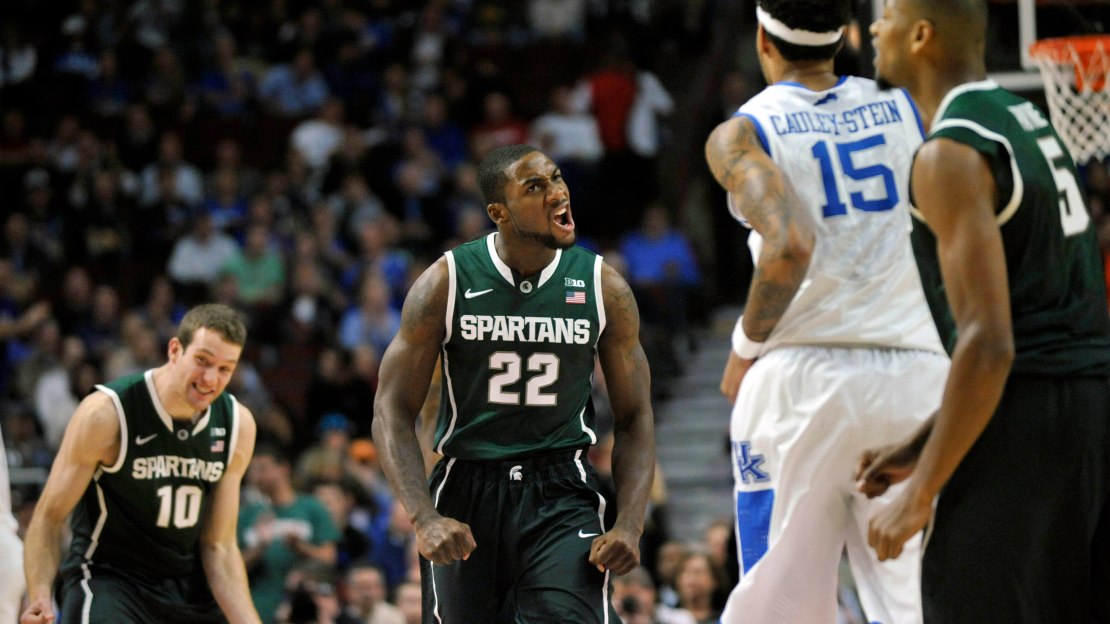 In the night's top matchup, Michigan State ran out to an early 10-0 lead against a young Kentucky team and did just enough the rest of the way to pick up a very big win. It was a tale of two halves, as the Spartans made the Wildcats look slow and disorganized over the first 20 minutes.

Wish I could say MSU's fastbreaking wing attack from '05 is back, but really UK just terrible at getting back on defense.

Defensively, Michigan State's man-to-man defense was severely packed in, making it look almost like a zone. the Spartans were daring the big and athletic Wildcats to beat them with the three-pointer, and John Calipari's team tried for awhile to poor effect. When combined with a rash of Kentucky turnovers, it enabled Michigan State to get easy buckets and take a 12-point lead into halftime.

After the break, however, the Wildcats made a concerted effort to get the ball inside to man-child Julius Randle, a move that paid immediate dividends. Randle scored 23 second-half points as Kentucky came storming back, but the following sequence quickly put the Spartans back in control:

In all, this is an impressive result for Michigan State.  Tom Izzo's defense held Kentucky to a rather pedestrian 1.06 points per possession. That's not a figure to brag about against most teams, but we're talking about an offense that could potentially be the best of the entire the tempo-free era. There's a good chance this ends up being the lowest or second-lowest output of Kentucky's season.

Gary Harris showed the nation that he's a legitimate POY candidate with 20 points, but Keith Appling shone even brighter. The senior posted a stellar line of 22 points, 8 rebounds, 8 assists, and 4 steals. Adreian Payne was highly effective when not benched with foul trouble (15 points on 10 shots, including some impressive perimeter play).

In the night's other big matchup, Wisconsin went old school in a win over Florida. After torching the nets on Friday for 86 points, the Badgers won a slugfest in the 50s. Much of that had to do with Florida's defense, which appears to be excellent once again this season, but Bo Ryan's team was also uncharacteristically sloppy with the ball. Wisconsin's 23.2 percent turnover rate was higher than all but two efforts from last season, and it is not something you'd expect from a team that posted the nation's fifth lowest turnover rate and returned its entire backcourt. This is likely a temporary blip–expect the Badgers to be much more careful with the ball moving forward.

The defensive effort from Wisconsin was quite impressive, holding the Gators to 0.88 points per trip, though it should be noted that the Florida offense is off to a sluggish start–the Gators barely eclipsed a point per possession against North Florida over the weekend.

Still, this is an excellent win for the Badgers, one that will serve them well come NCAA tournament seeding time.

Elsewhere, the Big Ten stayed undefeated, but not without drama. The biggest scare came in Bloomington, where Indiana held off a stout challenge from LIU-Brooklyn. The Blackbirds played a packed-in 1-2-2 zone, and the Hoosiers did not look like they had learned much in the offseason about how to score on a zone. Will Sheehey hit two huge threes down the stretch, and Indiana held on despite not scoring over the final minute and 55 seconds.

INSTANT HIGHLIGHT: That. Was. Close. It's over, though, @IndianaMBB fans. WATCH the final seconds again – http://t.co/YvGA2oPLTn

It's only been two games, but perimeter shooting looks like a concern for the Hoosiers. After shooting over 40 percent from three each of the past two seasons, Indiana is currently shooting 24 percent. Some dropoff should be expected–after all, Jordan Hulls, Christian Watford, and Victor Oladipo shot a combined 46 percent from three–but that number will rise in the coming weeks.

Still, Indiana doesn't appear to be a particularly good shooting team, leaving a lot of pressure on a young frontline to get interior looks. Hoosier fans can't be looking forward to visiting Syracuse in three weeks.

Tonight, Purdue will look to win more convincingly against a Central Connecticut team that appears to be better than Northern Kentucky. Illinois continues its gradual ramp-up in difficulty with a decent Valparaiso squad, and Penn State faces a challenge against a Bucknell team that lost by only four at Stanford. Speaking of the Cardinal, they host Northwestern on Thursday night in a good barometer game for the Wildcats.