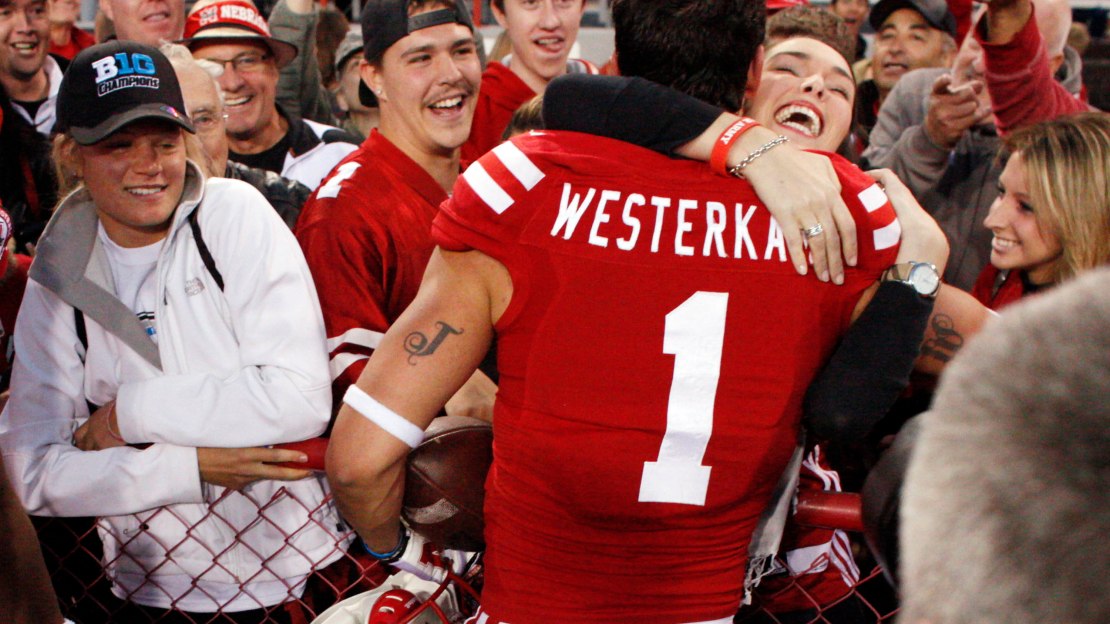 This was one of the best weeks of action, highlighted by Nebraska?s stunning last-second win over Northwestern on a Hail Mary pass. Ohio State rolls on, while Michigan State continues to look like the team to beat in the Legends. And the feel-good vibes continue for Minnesota, which may have killed Indiana?s bowl hopes. Here is my wrap of Week 10.

Biggest surprise: I thought Iowa had a shot to beat Wisconsin in Iowa City. But, it wasn?t close, as the Badgers took a 28-9 win. Heck, the Hawkeyes didn?t even score a touchdown, notching just 289 yards of offense and seeing quarterback Jake Rudock get hurt. The loss essentially kills any faint Legends hopes Iowa possessed and leaves the Hawkeyes shy of bowl eligibility. How good is this Iowa team? Its losses have been to very good teams in Northern Illinois, Michigan State, Ohio State and Wisconsin.

Biggest disappointment: Indiana. The Hoosiers needed to beat Minnesota to keep its bowl hopes viable. Alas, Indiana lost to the Gophers, 42-39. Yes, IU is 3-5 and can get bowl eligible by winning three of its last four games. But, that?s a long shot when you consider the Hoosiers still have to play Illinois, at Wisconsin, at Ohio State and Purdue. Yes, Indiana could beat the Illini and Boilermakers, but winning in Madison or Columbus will be a Herculean task.

Best play: This is a no-brainer. With the ball on the Northwestern 49-yard line with seconds left and trailing 24-21, Nebraska third-string quarterback Ron Kellogg III dropped back and heaved a pass toward the end zone. Jordan Westerkamp came down in the end zone with a tipped ball to secure an improbable victory and set off delirium in Lincoln, Neb. The win keeps Nebraska alive in the Legends chase.

[ MORE: Get more coverage of the Hail Mary game-winner ]

Play this again: Minnesota 42, Indiana 39. People who watched this are still trying to catch their breath. The Golden Gophers built a 35-13 edge midway through the third quarter. But the Hoosiers roared back, taking a 39-35 advantage with 5:33 remaining. Minnesota answered to get back up 42-39. IU kept coming, driving to the 9-yard line when a Nate Sudfeld lateral was mishandled by Tevin Coleman and recovered by Minnesota to secure victory. It was the Golden Gophers? third win in a row under acting head coach Tracy Claeys.

Never play this again: Ohio State 56, Purdue 0. And, it really wasn?t even that close. Here is all you need to know-Ohio State?s Doran Grant picked off the first pass of the game by Danny Etling and ran it back for a touchdown. It all went downhill at hyper speed from there for Purdue in an absolute demolition by Ohio State that pushed its winning skein to 21 games. It was 28-0 after one quarter and 42-0 at halftime, as OSU outgained Purdue 640-116 for the game. And just think: The Buckeyes had lost three of their last four in Ross-Ade Stadium and needed overtime to beat Purdue last year in Columbus.

– Braxton Miller. The Ohio State signal-caller continues his torrid run. He hit 19-of-23 passes for 233 yards with four touchdowns and a pick at Purdue. And, he barely broke a sweat in doing so.

– Ron Kellogg III. How often does a third-string quarterback toss a game-winning Hail Mary? Never ? until he did it vs. Northwestern with a 49-yard heave as time expired. Unreal.

– James White. Melvin Gordon had been the Wisconsin running back getting the headlines, but it was White who led the charge vs. Iowa. He ran for 132 yards and two late touchdowns to push the Badgers to a win on the road. Gordon? He had a season-low 62 yards.

– Bill Belton. Yes, he had a key fumble inside the 5-yard line late in the fourth quarter. But he was a star otherwise. The Penn State running back carried 36 times for 201 yards and a touchdown to spark what was mostly a listless Nittany Lions offense in a 24-17 overtime win vs. Illinois. Belton was the first Penn State back to eclipse the 200-yard rushing in a game mark since Larry Johnson in 2002.

– Ohio State winning skein. It?s 21 games with no real end in sight. I mean, who is gonna beat these guys?

– Ameer Abdullah. The Nebraska back was a hero vs. Northwestern, running 24 times for 127 yards. He is underrated-big time.

– Treyvon Green. No Venric Mark, no problem. Green rushed 19 times for 149 yards and three scores in the loss at Nebraska, helping the Wildcats run for 245 yards.

– Philip Nelson. The Minnesota quarterback hit 16-of-23 passes for 298 yards and four touchdowns, helping his team to 573 yards. The Gophers came into the game 11th in the Big Ten in total offense (340.6 ypg).

– Penn State in overtime. That?s two home overtime wins in a row for the Nittany Lions.

-David Cobb. The Minnesota running back continues his hot streak, running 29 times for 188 yards and a TD. That?s three 100-yard games in a row for Cobb.

– Carlos Hyde. It won?t ever get any easier for the Buckeye back than it did at Purdue, when he ran eight times for 111 yards. That?s 13.9 yards per carry, boys and girls. And that?s really good.

– That last play by Indiana. Nate Sudfeld attempted a lateral to Tevin Coleman which was mishandled and recovered by Minnesota to secure victory for the Gophers. The loss effectively ends IU?s bowl hopes.

– Purdue. Sell anything and everything Purdue. Quickly. Just when you thought things couldn?t get any worse for the Boilermakers, they do. The 56-0 loss at home to Ohio State was the worst beating Purdue has suffered in the history of the rivalry. The 1993 Purdue team went 1-10. This team likely will do it one better and go 1-11.

– Illinois ground game. It has been an issue all season. At Penn State, the Illini had just 90 yards rushing.

– Iowa ground game. The Hawkeyes had 31 totes for 110 yards (3.5 ypc). Not gonna get it done vs. a good team like Wisconsin. Mark Weisman had nine carries for 15 yards.

– C.J. Beathard. He came in when Jake Rudock got hurt and struggled, hitting 4-of-16 passes for 70 yards with a pick.

– Fitz Toussaint. The Michigan running back made a ?little brother? crack about Michigan State this week. Big mistake. He finished with 20 yards on eight carries.

The only key clash is Nebraska at Michigan. The Huskers need to win to stay a game back of Michigan State. The Wolverines are two games back of MSU and can?t afford any more slips it they want to stay in the Legends chase. Ironically, a Michigan win would be huge for Michigan State?s Legends title hopes. In other action, can Minnesota stay hot with Penn State coming to the Twin Cities? Illinois will look to end its 18-game Big Ten losing skein at Indiana, site of the Illini?s last league win in 2011. Wisconsin has an interesting non-league visit from BYU, while Iowa travels to Purdue looking to get bowl eligible.