Dennard, on Michigan rivalry: 'It means everything' 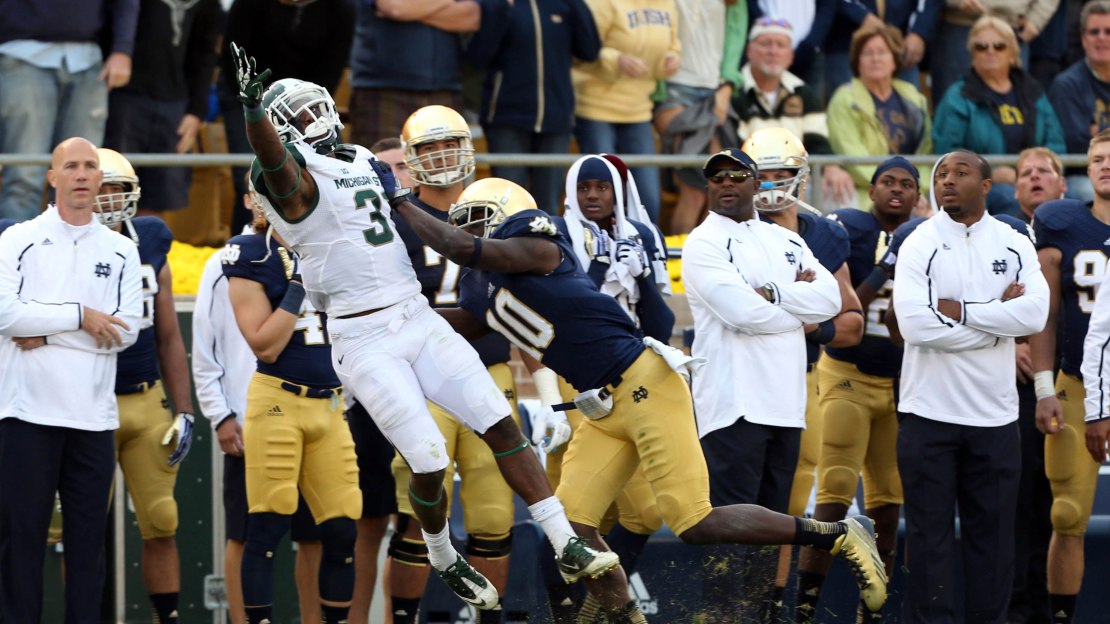 When you think of Michigan State, you think defense. And, there is no better player on the Spartan "D" than cornerback Darqueze Dennard. The 5-11, 197-pound senior from Dry Branch, Ga., is in his third season as a starter and has 136 tackles and 25 passes defended (eight interceptions, 17 pass break-ups) in 37 career games, including 33 starts (22 consecutive).

Dennard is the ultimate playmaker on the edge of a defense that ranks No. 1 overall in the nation (215.5 ypg). The unit has yielded just five touchdowns in eight games, allowing an average of 12.2 points.

Dennard may be having his best season yet. He leads team and ranks tied for sixth in the Big Ten with nine passes defended (two interceptions, seven pass break-ups). He also ranks fourth on the club with 31 tackles, including 2.0 for loss (four yards).

I caught up with Dennard as he prepped for a big visit from Michigan this Saturday in Spartan Stadium. MSU is in control in the Legends Division with a 7-1 overall record and 4-0 Big Ten mark. A win over the Wolverines would prime the Spartans for a strong finish as the program hopes to return to the Big Ten title game, where it lost to Wisconsin in 2011.

Q: What has been key to the unit playing so well in 2013?
A: I think a big key is we just have faith in each other. We all do our job and have each other?s backs. We try to have fun, and we also know how the defense is supposed to work. We have a lot of older guys who know how to operate this defense. We know our strengths and weaknesses. And we hold each other accountable. We are like a family.

Q: What are the strengths of the defense?
A: We have strengths all over. Our front seven is very strong, the line and linebackers. And our secondary is good, too. I don?t think we have any weaknesses in our defense.

Q: Who is the best cover man in the secondary?
A: That?s a tough one. A lot of us are good at covering. But I?m gonna have to go with myself.

Q: Who is the best hitter?
A: I?d say Isaiah Lewis. He may be the hardest hitting safety in college football.

Q: Who is the leader?
A: Me and Isaiah both are leaders back there. We are seniors who have been playing since we were freshmen. We know what?s going on. Q: What did you think when you saw that Michigan?s Jeremy Gallon had 369 yards receiving vs. Indiana?
A: That was a good game. He did a great job with runs after catches and making plays on the ball. He?s a good receiver. Devin Gardner likes to get him the ball a lot. I see why he had the game he had.

Q: Who have been some of the better receivers you have faced this year?
A: I?d probably say Notre Dame?s receivers. And Indiana?s, as well. Those were probably the two best receiving corps I have seen so far this season.

Q: Run or pass-which would you rather defend?
A: It doesn?t matter. They both are fun. Each offers me a chance to make plays. Versus the run, you can get a tackle for loss or force a fumble. Playing the pass, you can impact a game, too, to help the team. Either one is fine for me.

Q: What do you think of Devin Gardner?
A: He has a lot of skills. He can run and throw it. He spends a lot of time in the film room and knows his reads. He?s a good player.

Q: What does the Michigan rivalry mean to you?
A: It means everything. I have been sick since losing to them last season. We are ready to make it right in my last game vs. them.

Q: What?s your pregame ritual?
A: I lay out all my clothes before I put them on and look at them, and then listen to music and get into my zone.

Q: What is Pat Narduzzi like in practices?
A: He is the same as during games. He comes to practice ready to go. He?s very passionate about what he does. We all like that.

Q: Who do you pattern your style of play after?
A: That?s hard. I watch a lot of film on NFL guys. If there is anyone, I?d say it?s between Champ Bailey and Patrick Peterson.