Dienhart: Nothing was going to stop OSU on this night 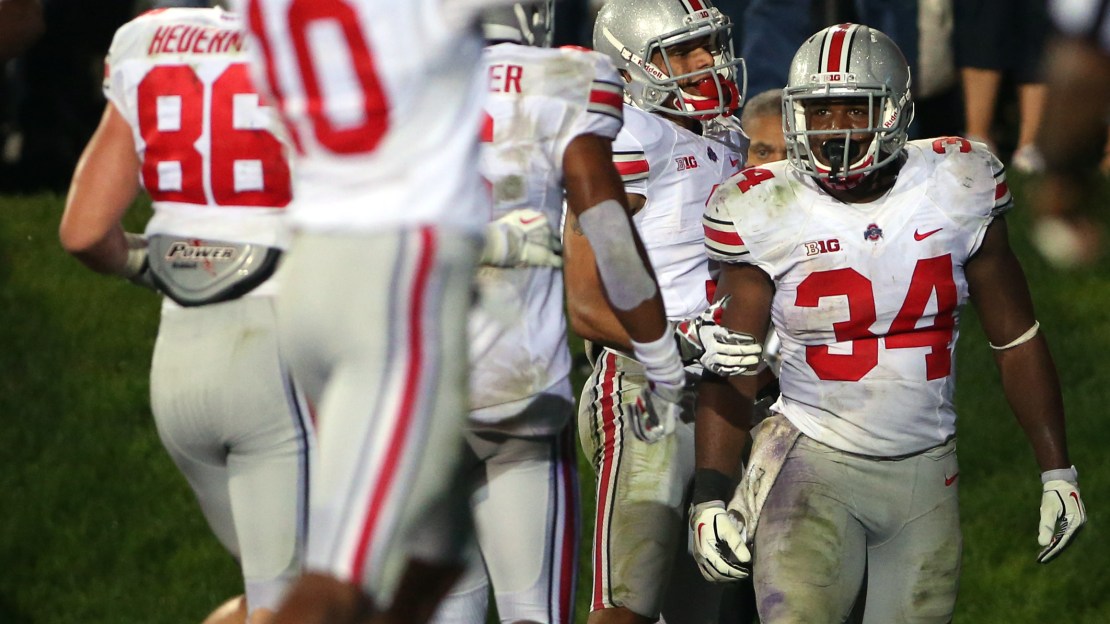 EVANSTON, Ill. — There were lead changes, momentum shifts and rain ? lots of rain. And, in the end, there was one big win for Ohio State. The Buckeyes? 40-30 victory over Northwestern not only solidifies their status as king of the Big Ten, it also keeps them unbeaten and still squarely in the national title hunt.

The victory caps an impressive two-week run in which the Buckeyes have beaten Wisconsin and now the Wildcats. And Urban Meyer has now won all 18 games as Ohio State coach. Books already have been written about him. Maybe one day, a statue will be chiseled.

You can debate where Ohio State should be slotted among the nation?s other unbeaten teams. And you can argue if the Buckeyes truly deserve to be mentioned in national title talk with the likes of Alabama, Oregon and Clemson, but it?s all moot right now in early October.

The Buckeyes are still unbeaten. And that?s all that matters. This team will continue to improve and gain momentum as October melts into November. By then, we?ll know all we need to know about the Buckeyes-and everyone else.

The Buckeyes are off next Saturday, a well-deserved respite after a 6-0 start (2-0 Big Ten). Then come home games vs. Iowa and Penn State, followed by trips to Purdue and Illinois. Then, there?s a visit from Indiana before a season-ending trip to Michigan on November 30.

So, let?s go ahead and say the Buckeyes have a great shot to push this winning skein to 23 in a row as they head to Ann Arbor with Big Ten and national title aspirations. (How jacked would the Wolverines be to ruin OSU?s season? Let?s save that for another day.)

This night belonged to Ohio State running back Carlos Hyde, a 235-pound battering ram who hammered and sawed at Northwestern?s defense until it broke. The final damage: 26 carries for a career-high 168 yards and three touchdowns.

Miller never really got in synch on this night. A week ago, Miller was coming back after missing almost three games and looked like a Heisman contender in a win over Wisconsin when he hit 17-of-25 passes for 198 yards with four touchdowns and ran 22 times for 83 yards in the 31-24 triumph. Tonight? He looked like he had missed almost three games.

Miller lost two fumbles and threw an interception, time and again trying to do too much. He hit just 15-of-26 passes for 203 yards with no touchdowns and a pick. (Corey Brown had 127 yards receiving.) Miller also ran 17 times for only 68 yards. But, it didn?t matter that Miller was off. This was Hyde?s night.

[ MORE: Where does Hyde land on our Leaders of the Week? ]

Credit the Buckeye defense, too. Trailing 23-20 early in the fourth quarter, Ohio State cornerback Doran Grant stepped in front of a Trevor Siemian pass, intercepted it and returned it to the NU 16-yard-line. The Buckeyes subsequently scored on a two-yard Hyde plunge to make it 27-23 Ohio State.

Later, the defense came up with the biggest stop of the game when it had to. With Ohio State leading, 34-30, with less than three minutes to play, Northwestern tried to convert a fourth-and-inches from the Buckeye 34-yard-line. Kain Colter lined up in the shotgun, then ran up under center to take the snap ? and dropped it. He subsequently got stuffed for no gain. Ohio State took over with 2:39 to play and never looked back.

It looked like it was going to be the Wildcats? night. Northwestern led 20-13 at halftime. It then took the opening kickoff of the second half and marched 60 yards in 12 plays, culminating in a field goal to push the Wildcats? lead to 23-13 at the 10:40 mark of the third quarter. But Ohio State took control from there.

Squandering a second-half lead is nothing new for Northwestern. In fact, it became something the Wildcats excelled at last season. NU blew a 28-17 lead at Penn State, a 28-16 lead vs. Nebraska and a 24-14 lead at Michigan.

Northwestern wore shirts emblazoned with 5:03 in the offseason. That represented five minutes and three seconds, which was how far the Wildcats were from going unbeaten in 2012. The shirts were supposed to serve as motivation, a nasty reminder of how great 2012 could have been-and it already was pretty sweet with a 10-3 mark.

Alas, instead of stamping out that trend, Northwestern has only added to the dubious legacy.

Still, this is a good Northwestern team that could win the Legends Division and then perhaps have a rematch with Ohio State in the Big Ten championship game.

[ MORE: What did Tom learn in Week 6? Ohio State can exhale ]

The Wildcat arsenal was on full display tonight. The staff once again deftly balanced quarterbacks Colter and Siemian, maximizing the skills of each.

Siemian hit 13-of-18 passes for 245 yards with two touchdowns and a pick. Colter completed all 12 of his passes for 98 yards, showing his jack-of-all trades skills by also running eight times for 16 yards and a score and catching a pass for nine yards. But in the end, Northwestern?s inability to run (43 carries for 94 yards, 2.2 ypc) and a blocked punt for a touchdown in the first quarter doomed it.

This was Hyde's night. This was Ohio State's night. Nothing was going to stop OSU–not the rain or a hot-starting, jacked-up Northwestern team.