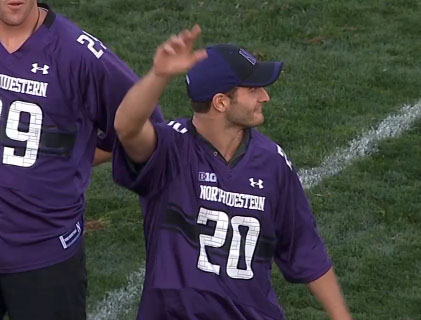 Northwestern pubs itself as "Chicago's Big Ten Team." So, it only makes since that the Wildcats would honor the Chicago Blackhawks for their Stanley Cup championship the first chance they got. During Saturday night's home opener vs. Syracuse, Northwestern did just that.

The Wildcats invited Andrew Shaw, Bryan Bickell and Brandon Saad to Ryan Field, and the trio, dressed in Northwestern football jerseys and hats, was recognized during a timeout.

Speaking of hockey, don't forget that the puck drops on the first season of Big Ten hockey on BTN/BTN2Go this winter.