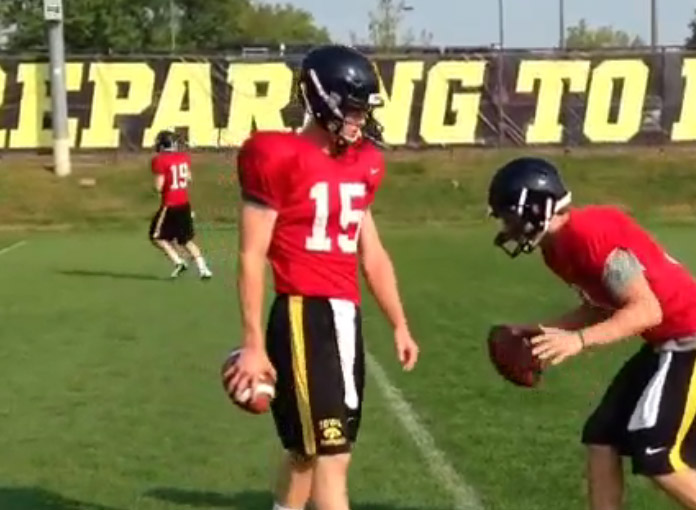 Rudock has been running with the first-team throughout training camp and has looked the best among the competition, which also includes redshirt freshman C.J. Beathard and junior Cody Sokol-who began his career at a junior college.

Rudock is perceived to be a safe choice, the signal-caller with an OK arm who knows the offense best-and is the least likely to commit a catastrophic mistake. Beathard may have the best arm of the bunch, but he's prone to mistakes.

None of the quarterbacks have experience, which made this an intriguing race for a program coming off a 4-8 season and missing a bowl for the first time since 2007. This is a key year for a Hawkeyes program that has gone from 11 wins in 2009 to eight, seven and then four last season.

Rudock will be at the controls of a revamped attack under coordinator Greg Davis that will work from a no-huddle scheme at a quick pace.

The Iowa passing game needs help. It struggled in 2012 with James Vandenberg at the controls, as the Hawkeyes had a Big Ten-low seven touchdown passes for an aerial game that ranked 99th in the nation (187.4 ypg).

Rudock will need help from a receiving corps that is looking for playmakers. Junior Kevonte Martin-Manley and seniors Don Shumpert and Jordan Cotton are veteran presences, but none are a game-breaker. Sophomore Tevaun Smith has potential. JC transfer Damond Powell has shown flashes of playmaking ability since arriving just days before the start of training camp.

Rudock also figures to benefit from a strong line that should pave the way for a good rushing attack, led by a strong collection of runners that includes Mark Weisman, Damon Bullock and Jordan Canzeri.

Iowa needs to establish the run and pass on its terms. This doesn?t appear to be an offense equipped to mount big comebacks or throw 30-40 times a game.