Dienhart, on Badgers: 'This is still Wisconsin' 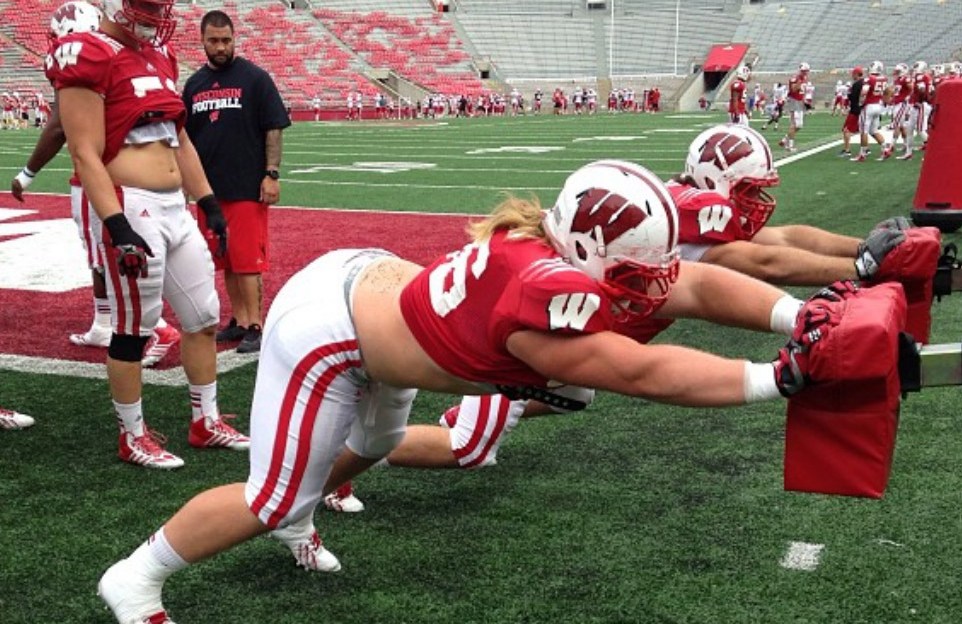 MADISON, Wis. – No doubt about it, Gary Andersen will possess plenty of talent in his first season at Wisconsin. In fact, ex-coach Bret Bielema often pointed toward 2013 as being a potentially big season for a program that has gone to the last three Rose Bowls. On Thursday, the defense had a big edge on the offense, as camp legs appear to be setting in.

The quarterback race is essentially down to Curt Phillips and Joel Stave, but JC transfer Tanner McEvoy is still in the mix-a bit. Program watchers say the derby officially will be whittled to two after Monday's scrimmage. There even is a chance the starter could be chosen then. Stave is a big, strong-armed guy in the pocket who is a better passer than Phillips, who is more nimble despite his injury issues. I like Stave in this race because of his arm. This was the worst passing game in the Big Ten last season, so it needs the quarterback with the better arm-and most experience.

Speaking of the offense, don't expect much different style-wise with the new staff under coordinator Andy Ludwig. This still is Wisconsin, so smash-mouth football is the flavor. If Tanner McEvoy was signal-caller, you may see some read-option. But, he's a long shot after not arriving until fall camp. Still, it will be interesting to see if the staff has any packages to take advantage of his size (6-6) and skill-set, which may be more suited for this offense than any other signal-caller on the roster.

[ TWITTER: Check out our guys' tweets from Wisconsin camp ]

The running back situation is nice. I asked running backs coach Thomas Hammock who is No. 1: James White or Melvin Gordon? He just smiled. Each could start-and excel. The guy who excites is true freshman Corey Clement, who flashed quickness and strength. The kid is gonna be good. Fullback Derek Watt has added 20 pounds and is a battering ram. Hammock likes him. I do, too.

The search continues for a complement to wideout Jared Abbrederis, the clear No. 1. Who will it be? No one really emerged Thursday. Coordinator Andy Ludwig told me he likely will use several guys, mentioning Kenzel Doe, Robert Wheelwright, Jordan Fredrick and Jeff Duckworth. Each has redeeming qualities, but none looks like a potential difference-maker. Still, you can win with these guys.

What the Badgers may lack at wideout, they could compensate for with tight ends. Outside of Penn State, this may be the best collection of tight ends in the Big Ten. Andy Ludwig told me he has four starting-caliber guys, led by Jacob Pedersen. The others to watch are Brain Wozniak, Sam Arneson and Eric Steffes. Ludwig also likes Austin Traylor. There is a nice blend of athletic and point-of-attack blocking at this position. It will be fun to watch Ludwig use these guys.

The defense looks markedly different, as coordinator Dave Aranda has installed an aggressive 3-4 scheme that will attack and look to generate big plays (turnovers). The line is good, with big Beau Allen on the nose and Ethan Hemer and Pat Muldoon, among others, up front. And the linebackers are good, led by Chris Borland. He was all over the field today. Tyler Dippel and Brendan Kelly play on the edge. They have size, but not a ton of speed. Vince Biegel is a guy I like. He plays with lots of energy.

[ INSTAGRAM: See all of our photos/videos from Wisconsin practice ]

The secondary is a worry. Dezmen Southward-the lone starter back–looked good at safety. Leo Musso is the other safety, but Michael Caputo also is in the mix at the spot. The starting corners are Darius Hillary and Peniel Jean. Jakarrie Washington will be in the rotation, as will diminutive JC transfer T.J. Reynard. This group moves well, but there is a lack of experience. And that could be an issue moving forward for the iffiest spot on the defense.

The offensive line typically is a strength in Madison. Well, that may not be the case in 2013. The starters are good, with Ryan Groy at left tackle; Dallas Lewallen at left guard; Dan Voltz at center; Kyle Costigan at right guard; Rob Havenstein at left tackle. Voltz was out today dealing with a hamstring issue, as Lewallen flipped over to snap. Zac Matthias is a decent option off the bench. But after that, things drop off quickly. The second-team line looked like this: Tyler Marz at left tackle; Ray Ball at left guard; Jacob Ninneman at center; Trent Denlinger at right guard; Walker Williams at right tackle. This unit is more about power and strength than quickness-nothing new there.