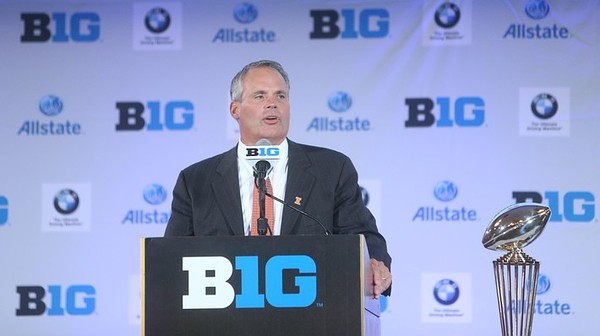 Illinois coach Tim Beckman said he won?t let negativity infiltrate his program. That?s a good thing-because there is a lot of it surround the Fighting Illini program.

Beckman needs as much positive mojo as possible coming off a 2-10 debut season that saw the Fighting Illini go winless in Big Ten play, pushing the school?s conference losing skein to 14 games.

Beckman?s to-do list is a lengthy one. Job No. 1 is rehabbing an offense that ranked last in the Big Ten overall and last in scoring. Beckman reworked his staff and brought in veteran Bill Cubit to run the attack. Smart move. Cubit is a sage offensive mind who has pushed the buttons on some strong offenses in other stops as a coordinator.

"I don't know if words can describe what he's meant to this team," said Beckman.

To be fair to Beckman, he didn?t inherit a loaded roster from Ron Zook.

"The inherited depth was an issue,? said Beckman. ?We've been able to add 33 new faces. Does that bring depth? No question."

To that end, Beckman looked for some help-right now. So, he turned to the JC ranks.

"We will continue to bring in JC players for the next two to three years to get balance from senior to freshman classes," said Beckman.?We will be young. But we will be a very eager football team."