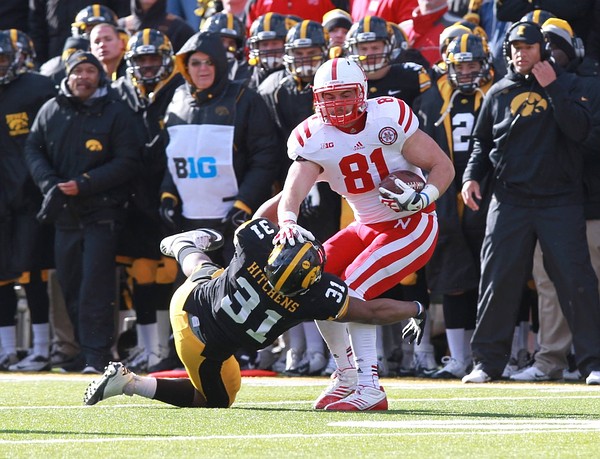 Iowa is coming off a 4-8 season, its worst since 2000. So, no doubt, a good start would help. In fact, Bryce Miller of HawkCentral.com thinks the Hawkeyes? opener Aug. 31 vs. Northern Illinois will set the tone for this oh-so-critical season.

How big and key is this opener? Miller says it?s been more than a quarter of a century since a win to kick off things for Iowa felt so necessary.

This isn?t an overstatement. A win over the Huskies, who are coming off an Orange Bowl trip, could push the Hawkeyes to a 2-0 start as they head to Iowa State for a huge clash vs. the Cyclones. If Iowa can go 4-0 in non-league play (there also are home games vs. Missouri State and Western Michigan), it could push the Hawkeyes to a strong season. And Iowa needs that, as its win total has slipped each of the last three seasons-from 11 in 2009 to 8 to 7 to 4.

OSU OFFENSE EVOLVES: Nice read from Tim May of the Columbus Dispatch, who says Urban Meyer must continue to tweak the Buckeye offense to stay ahead of defenses.

One of the wrinkles: The Buckeyes will use a diamond formation that will feature Braxton Miller with a running back to each side AND behind him. Well, it?s really just a modern version of the old full-house backfield. You also can think of it as an overloaded version of the Pistol formation.

HOWARD GRIFFITH Q&A: BTN?s own Howard Griffith-an Illinois legend-sees plenty to be optimistic about for the Fighting Illini. Check out this Q&A with Griffith in the Champaign News-Gazette.

A big reason for Griffith?s optimism: The arrival of offensive coordinator Bill Cubit. I agree. Cubit will make a huge difference in what was a moribund offense in 2012.

ABOUT MICHIGAN'S QB DEPTH: Remember when Michigan was in the market for a transfer quarterback to help fill out a shallow depth chart? Well, Brady Hoke says he?s no longer shopping.

Earlier in the offseason, Hoke said Michigan would explore a graduate transfer option in an effort to get an experienced backup behind Devin Gardner. The Wolverines were in a quandary after Russell Bellomy suffered a season-ending knee injury in the spring. So, Michigan's only other scholarship quarterback for next season will be true freshman Shane Morris.

MORE WOLVERINES: Oh, and Hoke says star linebacker Jake Ryan is still on progress to play in October, as he continues to make a speedy recovery from a spring knee injury. Amazing.

I have a feeling they?ll make it-somewhere. Love the hustle and desire-and defense.

GOOD NEWS, PURDUE: High school boys all-stars from Indiana and Kentucky compete each summer in a two-game series. The Indiana all-stars pulled off a sweep recently in the storied series. And incoming Purdue recruit Bryson Scott, a 6-1 guard, played a key role.

Scott will be counted on to play a key role this winter for Purdue team coming off its first losing season since 2005-06. He?s the best player among the three freshmen who will debut next season. Kendall Stephens, the son of former Boilermakers star Everette, also will play a big role, especially as a shooter.

This Danny green business is why teams may grab Hardaway. Can shoot from deep, get hot, still helpful even if not elite in all other areas

My take: This is a great comparison.