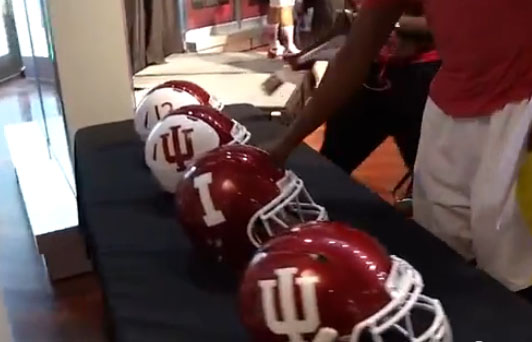 The Indiana football team unveiled six new helmets Monday in a YouTube video that can be found at the bottom of this post. Let's just say, the Hoosiers, who wore two helmets the last couple of years (No. 1; No. 2), will have plenty of options to consider every week this season.

None of the new lids will receive more attention than the chrome candy stripe design. Yes, you read that correctly. Don't believe me? See it below: It even has a chrome facemask! Here's another shot. The rest of the helmets (two white, two crimson), all of which rock a white facemask, are a little less attention-grabbing.

Both white lids feature a thick crimson stripe down the middle (think 2011 Ohio State alternate), while one has player numbers on both sides (think Alabama) and the other has the school's logo on each side.

As for the crimson ones, one features the current IU logo on the right side and the design of the state flag on the left side, and the other is a nod to the past with the old-school "I" logo on both sides.

Check out "The Reveal" in the video below:

Indiana's Kevin Wilson tweeted this picture of all the helmets: