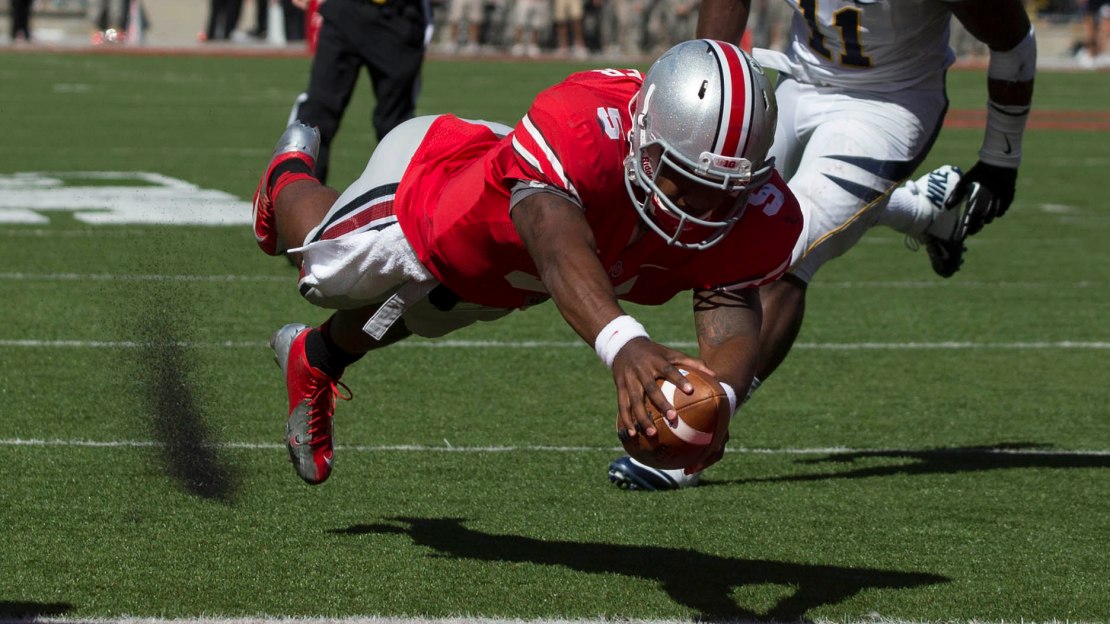 Quarterback play hasn?t been at an elite level in the Big Ten in recent years. In fact, many feel that?s one reason for the conference?s struggles. But this year?s collection of passers teems with potential.

I've been rolling out my Big Ten unit rankings here, and I've been looking forward to taking on the quarterbacks. Ohio State?s Braxton Miller, the conference?s top Heisman contender, leads the charge. Here?s my ranking of the Big Ten?s complete quarterback units. Agree or disagree? Who will rise up this season? And who might falter? Make your own points at the bottom of this post.

And away we go.

1. Ohio State. Braxton Miller is back for his junior season as the league?s bellwether. He won the Silver Football in 2012 as the Big Ten?s top player en route to leading the Buckeyes to a 12-0 mark and finishing No. 2 in the league in passing efficiency. Miller is the ultimate dual threat, ranking fourth in the Big Ten in rushing (105.9 ypg) en route to running for 1,271 yards. But staffers want to see him take the next step as a passer. Backup Kenny Guiton, a senior, showed his skills in leading Ohio State to a comeback win vs. Purdue last year.

2. Nebraska. Taylor Martinez has continued to improve each season. As a junior in 2012, he led the Big Ten in passing efficiency. And his 23 touchdown passes ranked second in the conference; but his 12 interceptions led the league. Martinez remains a great running threat, gaining 1,019 yards rushing last season. Redshirt freshman Tommy Armstrong looks like the signal-caller of the future. Senior Ron Kellogg also is capable.

3. Northwestern. The dynamic duo of Kain Colter and Trevor Siemian returns to continue to dispel the notion that you can?t play two quarterbacks and succeed at a high level. Colter, a senior, is a terrific athlete and runner who ran for 894 yards last year. But he doesn?t get enough credit for his passing skills. He hit a league-high 67.8 percent of his attempts in 2012. Siemian, a junior, is a savvy passer who can start or come off the bench with equal aplomb.

4. Indiana. No school has better proven depth for an offense that had the Big Ten? No. 1 passing game in 2012. Sophomore Tre Roberson is back after breaking his left leg vs. UMass in the second game of last season. Junior Cameron Coffman started the final 10 games and kept the Hoosiers? offense humming the rest of the season after arriving from a junior college. And Nathan Sudfeld also showed promise in 2012 as a true freshman.

5. Wisconsin. Lots of sorting out to do. The Badgers have a nice collection of quarterbacks who need to improve a passing game that ranked last in the Big Ten in 2012. Sophomore Joel Stave probably is the best of the bunch, starting six games before breaking his collarbone last season vs. Michigan State. That forced Curt Phillips into action, and he had his moments in starting the last five games. But the sixth-year senior is more runner than passer. Senior Danny O?Brien started the first three games after transferring from Maryland but was largely ineffective and benched. Redshirt freshman Bart Houston may have the best arm of the bunch. Touted JC transfer Tanner McEvoy arrives in the summer. He?s supposed to be a great fit for this attack.

6. Michigan. Junior Devin Gardner showed flashes of his ample skill last year when he started the final five games after Denard Robinson injured an elbow at Nebraska. But as the competition stiffened, Gardner struggled. See the final two games of the 2012 at Ohio State and vs. South Carolina in the Outback Bowl. The backup situation is a big concern after Russell Bellomy suffered a knee injury in the spring that will keep him out all season. Incoming freshman Shane Morris and redshirt freshman Brian Cleary are the backup options.

7. Illinois. Athletic Nathan Scheelhaase is a three-year starter and leader. Yes, he lacks arms strength, but he has been hurt by a revolving coaching staff. The senior will work for his third coordinator in three years. Reilly O?Toole, a junior, has a strong arm. If he has to play an extend stretch, he?s ready and able for an aerial game that ranked just 11th in the Big Ten last season.

9. Minnesota. Philip Nelson received a baptism of fire last season as a true freshman in taking over for MarQueis Gray, starting the final seven games of 2012 in helping the Golden Gophers to their first bowl since 2009. He?s a nice dual-threat fit for this offense. Ditto redshirt freshman Mitch Leidner, who continues to push Nelson. True freshman Chris Streveler arrived early to take part in spring drills. Coaches love him.

10. Purdue. Senior Rob Henry is a good athlete and leader. And he has experience, starting seven games in 2010 until a knee injury ruined his 2011 season before it even started. But true freshman Danny Etling may be more talented. He turned some heads after taking part in spring drills. Redshirt freshman Austin Appleby also remains in the chase for a Boilermakers squad that lost Robert Marve and Caleb TerBush.

11. Iowa. The competition to replace James Vandenberg will continue in fall camp. Sophomore Jake Rudock, junior Cody Sokol and redshirt freshman C.J. Beathard remain in the running. Iowa had a Big Ten-low seven touchdown passes last season. Rudock may have an edge entering the summer just because he has been in school for two years. Stay tuned.

12. Penn State. Replacing Matt McGloin will be difficult. He led the Big Ten in passing yards and touchdown passes in 2012. Tyler Ferguson arrived from a JC and looked solid in spring drills. Steven Bench transferred to South Florida after spring practice after playing a bit as a freshman in 2012. Incoming freshman Christian Hackenberg arrives in the summer amid massive hype. He may ultimately win the job.