Debate It: Should IU be ranked in preseason polls? 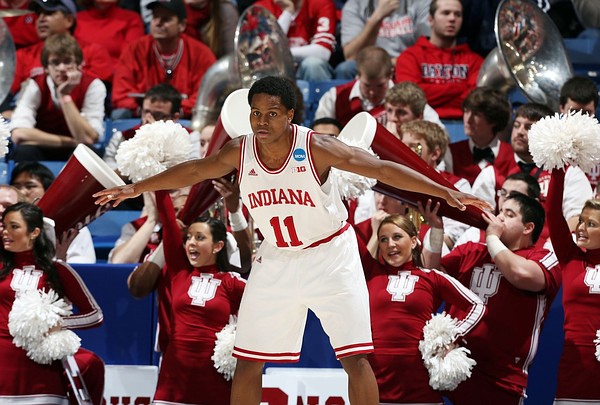 Tom Crean and Indiana spent a big portion of last season ranked No. 1 in the nation. As we all know, though, the Hoosiers lost a ton of talent, including Jordan Hulls, Victor Oladipo, Christian Watford and Cody Zeller. They return Yogi Ferrell and Will Sheehey and also welcome a decorated incoming class, so the question needs to be asked: Should Indiana be ranked in the preseason polls? BTN.com's Tom Dienhart and Brent Yarina offer their thoughts below.

Tom: The Hoosiers lost a lot of star power off their Big Ten championship team that advanced to the Sweet 16. Victor Oladipo and Cody Zeller turned pro early, while seniors Christian Watford and Jordan Hulls have graduated. Still, I think Tom Crean?s crew should be ranked entering 2013-14. The Hoosiers will have a nice core of players to build around in forwards Will Sheehey and Jeremy Hollowell, along with guard Yogi Ferrell. And touted youngsters Hanner Perea and Peter Jurkin could emerge. But the real reason for optimism is a star-stuffed collection of incoming freshmen. Noah Vonleh, a 6-9 power forward, is the jewel of the class. He should be a star the instant he walks onto the court. Small forward Troy Williams, center Luke Fischer and shooting guard Stanford Robinson also will bring fat scrapbooks to Bloomington. Yes, there may be some bumps along the way early next season while the young Hoosiers develop chemistry and smooth over rough spots. But this team?s talent dictates a preseason ranking. And, heck, Indiana could emerge as a Big Ten contender in a league that figures to be paced by Michigan State, Ohio State and Michigan.

Brent: When it comes to college sports, few things frustrate me more than the made-to-create-buzz preseason rankings. They mean nothing, but at least in basketball they don't have any impact on the postseason. Why the funny face, football? OK, now that that's out of my system, to the question proposed: No, I don't think Indiana should be ranked in the 2013-14 preseason polls. Relax, Indiana fans, this is just my opinion on the preseason polls. Should the Hoosiers' decorated freshmen be more Yogi Ferrell than Hanner Mosquera-Perea, no doubt, Indiana deserves to be ranked – after the first couple weeks. But, from what we know right now, that Indiana will be comprised of Ferrell, Will Sheehey, Evan Gordon and a bunch of inexperienced, albeit talented, youngsters, I'm not sure the Hoosiers are worthy of a national ranking from the onset. Frankly, I'm not a fan of assuming decorated freshmen will immediately transition and succeed, and that's what voters will be doing if they feel Indiana is one of the nation's top 25 teams in early November. So, yeah, Indiana features the talent to be ranked, but I don't see it as one of the top 25 teams when the season tips.