New divisions, schedules ahead for football 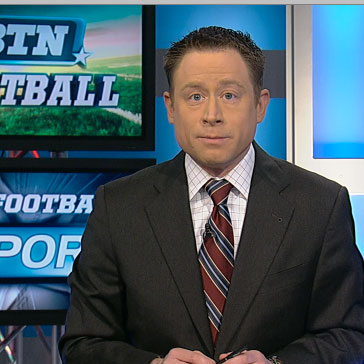 So the Big Ten Conference will move to two new football East and West divisions in 2014 and a nine-game conference schedule in 2016. In an interview with BTN on Sunday, Big Ten Commissioner Jim Delany said, "Being broader, being larger, geography had to play a larger part."

Meanwhile, BTN.com senior writer tells our BTN football team not to be so quick to say the East will always be stronger than the West. BTN football analyst Gerry DiNardo prefers the previous set-up was based on competitive balance while Howard Griffith says the East has the edge right now. Find out more about Sunday's Big Ten Conference realignment, division names, and the nine-game football schedule.

The conference is going with "East" and "West" divisions instead and switching to a nine-game scheduling format after Big Ten presidents and chancellors approved the moves on Sunday. The new division alignments will begin in 2014 when Rutgers and Maryland join the conference, meaning "Legends" and "Leaders" will be a thing of the past.

That will probably come as good news for fans who have criticized those names ever since the league unveiled them in 2010. To many, they were confusing and didn't help identify where teams play, but that won't be an issue any more.

[ RELATED: No more "Legends & Leaders" | Dienhart: It's the right move | Sound off on BTN Connect ]

Indiana, Maryland, Michigan, Michigan State, Ohio State, Penn State and Rutgers will be in the East division. The West will consist of Illinois, Iowa, Minnesota, Nebraska, Northwestern, Purdue and Wisconsin. Schools will play six division games plus two against teams from the other division in 2014 and 2015. In 2016, they'll play three cross-division games.

"Big Ten directors of athletics concluded four months of study and deliberation with unanimous approval of a future football structure that preserved rivalries and created divisions based on their primary principle of East/West geography," Delany said in a statement. "The directors of athletics also relied on the results of a fan survey commissioned by BTN last December to arrive at their recommendation, which is consistent with the public sentiment expressed in the poll.

Beginning in 2016, each school will play three teams from the other division as part of its nine-game schedule. The cross-division games will include one protected matchup on an annual basis between Indiana and Purdue.

The Big Ten is returning to a nine-game conference schedule for all teams for the first time since the 1983 and 1984 seasons.