Dienhart: McGary, Robinson team up to stay on 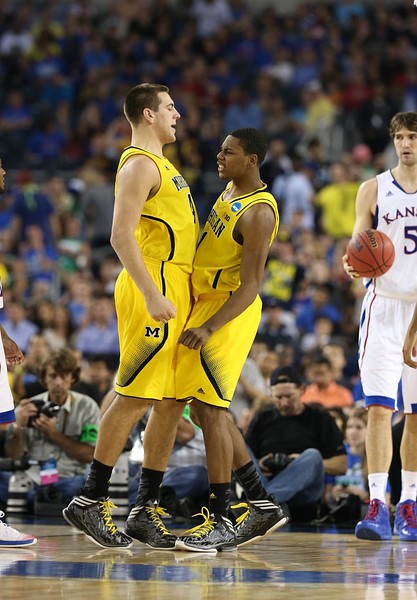 Trey Burke announced he was leaving Michigan after two seasons. And Tim Hardaway, Jr., followed him out the door soon thereafter after three seasons in Ann Arbor. But Mitch McGary and Glenn Robinson III are returning after sensational freshman seasons.

The duo made a joint announcement today after helping the team to a 31-8 overall record and 12-6 mark in the Big Ten before helping lead Michigan on a charge to the national championship game, where it lost to Louisville. It was the school?s first trip to the title game since it made consecutive trips in 1992 and 1993.

Robinson was projected by most to be a first-round pick. McGary also had a good shot to go in the first round, as the draft lacks quality big men.

McGary?s stock soared during the NCAA tourney, averaging 14.3 points and 10.7 assists and flashing an all-out, hustling style that energized the team and excited fans. The burly 6-10 freshman was at his best vs. VCU in the second round and Kansas in the Sweet 16, notching 21 points and 14 boards vs. the Rams and 25 points and 14 rebounds vs. the Jayhawks. McGary averaged 7.5 points and 6.3 rebounds for the season.

Robinson, whose dad was the No. 1 overall pick in 1994, averaged 11.0 points and 5.4 rebounds. The 6-6 forward made his mark as a shooter but also showed a knack for getting to the basketball. NBA scouts love his athletic ability on the wing. The return of McGary and Robinson means Michigan will have a good shot to make a run at the Big Ten title and play deep in the NCAA tourney next season.Other Big Ten favorites will be Michigan State, Ohio State and Iowa.

The announcement by McGary and Robinson stops the talent drain on the Big Ten, which has seen in addition to Burke and Hardaway Indiana?s Cody Zeller and Victor Oladipo along with Ohio State?s Deshaun Thomas all turn pro early.

Earlier today, Michigan State?s Gary Harris said he would return to East Lansing for his sophomore season after earning Big Ten Freshman of the Year accolades. The only player left to make a decision is Spartan big man Adreian Payne. The deadline is April 28.

We have some Unfinished Business to take care of!!

Mitch McGary on the fast-break dunk.

Mitch McGary with a jam.