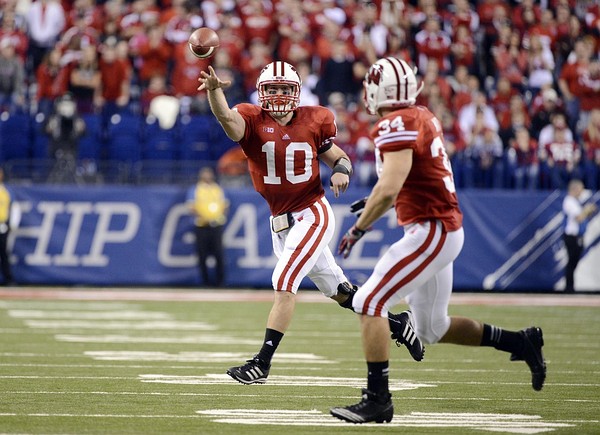 Wisconsin will play its spring game this Saturday. And new Badgers coach Gary Andersen would like to see the passing game improve. In fact, Jeff Potrykus of the Milwaukee Journal Sentinel notes that Andersen saw in the Rose Bowl last season that Wisconsin?s passing game needs to improve. The Badgers completed 10 of 17 passes for 83 yards in the 20-14 loss to Stanford.

Anderson?s concern isn?t unfounded. Consider: Wisconsin finished last in the Big Ten in passing (156.9) in 2012. That was the school?s lowest mark since 1999 (141.8). The Badgers tossed only 15 touchdown passes last season, which was eighth in the Big Ten and a drop of 19 from 2011 and the team's second-lowest total in the last eight seasons. Part of the issue this spring could be facing a new Wisconsin defense that can show a variety of looks, from a 3-4 to a 4-3 to just one down lineman.

[RELATED: You can watch all three Saturday spring games live on BTN/BTN2Go.]

"We're working against a new defense," quarterback Joel Stave after a recent workout. "It's not the defense I was comfortable seeing."

?At this point, it?s early to try and predict,? Ferentz said. ?And we?re not going to. We?ll let the guys continue to compete.?

So, the battle between Jake Rudock, Cody Sokol and C.J. Beathard will continue this summer and into camp. Stay tuned. But in the end, I think Rudock will be the guy.

While on the subject of Iowa, here is some nice video of offensive vs. defensive line work from a recent workout.

If this doesn?t get you fired up for football, nothing will. Mike Carmin of the Lafayette Journal-Courier has a nice Q&A with Purdue offensive coordinator John Shoop, whose mission is to make this a more physical offense.

It?s all about running tough to set up the play-action pass. This type of attack hasn?t been seen in West Lafayette since Jim Colletto, who like Darrell Hazell had close ties to Ohio State.

Minnesota A.D. Norwood Teague isn?t going to get hung up on wins and losses in Jerry Kill?s third season. (By the way: Teague historically has succeeded in Year Three at his other stops.) And, he isn?t worried about Kill?s low-ranked recruiting classes. Good to see that Teague ?gets it,? if you know what I mean.

While on the subject of the Spartans, the defensive line is under scrutiny.

With the linebackers and secondary apparently fortified and looking like strengths, the line is a concern. A group that underachieved in 2012 is now without William Gholston and Anthony Rashad-White. There are plenty of options at end (Shilique Calhoun, Marcus Rush, Joel Heath, Denzel Drone) and at tackle (Tyler Hoover, Lawrence Thomas, James Kittredge, Micajah Reynolds). In fact, this may be Mark Dantonio?s deepest collection of talent inside. Now, it has to deliver some big plays under new coach Ron Burton.

No news to report on the Gary Harris front. The Michigan State freshman sensation is still undecided on if he?ll return to East Lansing. Adreian Payne still hasn?t made his intentions clear, either. I think Harris stays and Payne goes. But, that?s just me.

Check out where Big Ten signees are in the rankings. Indiana leads the way with five players in the rankings, paced by Noah Vonleh at No. 8. Other Hoosiers: SF Troy Wilson No. 47; SG Stanford Robinson No. 56; C Luke Fischer No. 94; SF Devin Davis No. 127.

Illinois recently added Seton Hall guard Aaron Cosby. Now, the Illini have added another transfer in 6-7 Illinois State product Jon Ekey. The difference: Cosby is a sophomore who must sit out next season; Ekey will be able to play right away as a fifth-year transfer. Ekey has been compared to Tyler Griffey. So, there you go.

It became official on Tuesday: Nebraska assistant Ben Johnson is leaving to join Richard Pitino?s Minnesota staff. Hard to begrudge Johnson: He?s a former Gopher. Huskers coach Tim Miles says he is in no rush to tab a replacement.

I like how Pitino?s staff has taken shape. This could work out just fine.