Debate it: Will Ohio State have B1G's best offense? 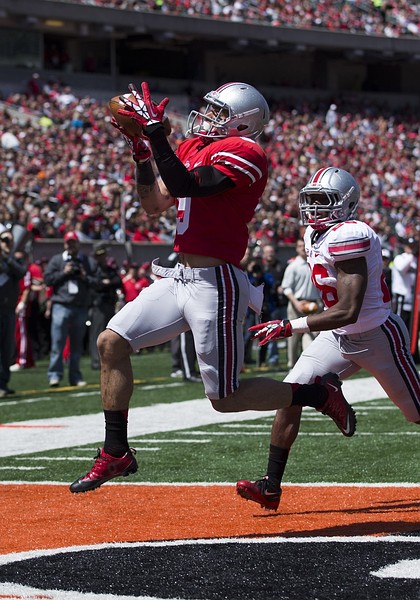 Give Braxton Miller and the Ohio State offense another year under Urban Meyer, and the results should improve. Heck, in Year One with Meyer, the Buckeyes averaged a Big Ten-best 37.2 points per game. With Miller and a host of his best weapons back, including Carlos Hyde, Corey Brown and Devin Smith, among others, will Ohio State have the Big Ten's best offense in 2013? BTN.com's Tom Dienhart and Brent Yarina discuss it in this post.

Question: Will Ohio State have the best offense in the Big Ten?

Tom: No doubt, the Buckeyes will have lots of talent on offense-led by quarterback Braxton Miller, who has improved his passing mechanics. I also like the line, which has to find only a right tackle but has some good options in Taylor Decker and Chase Farris to replace Reid Fragel. But the skill-position talent gives me cause for some concern. How will Jordan Hall look playing a ?Percy Harvin? role in the slot? Are there enough receivers for an offense that figures to use some four- and five-wideout looks on occasion? Chris Fields turned some heads in the spring. Others who must play well on the perimeter are Devin Smith, Michael Thomas, Evan Spencer and Corey Brown. And the running backs look more like bruisers than game-breakers with veterans like Carlos Hyde, Bri?onte Dunn and Rod Smith all over 220 pounds. In the end, I think Nebraska will have the top offense in the Big Ten. What would be interesting: These teams meeting in the Big Ten title game, which could occur.

Brent: In Braxton Miller, the Buckeyes have the Big Ten's best quarterback, hands down. And in Carlos Hyde, they have one of the better and more underrated running backs. Add a healthy Jordan Hall and a more experienced receiving unit to the mix, and Urban Meyer and company will score a lot of points. But, no, they won't have the best overall offense. That claim – at least in the preseason – goes to Nebraska, which is balanced and loaded at the skill positions. Michigan also could enter the equation if it finds a reliable No. 1 running back and if Devin Gardner lives up to his Colin Kaepernick talk. And don't sleep on Northwestern, which averaged 31.7 points last year and returns Kain Colter and Venric Mark. Back to the Buckeyes, though: They still have much to prove in the passing game. As well as Miller played last season, his 58.3 completion percentage last year topped only Andrew Maxwell and James Vandenberg among full-time Big Ten starters. To be fair, the way the Buckeyes ran the ball (18th in rushing yards in FBS), much wasn't need from the passing game. Still, I want to see a little more balance from this unit before anointing it the Big Ten's best.