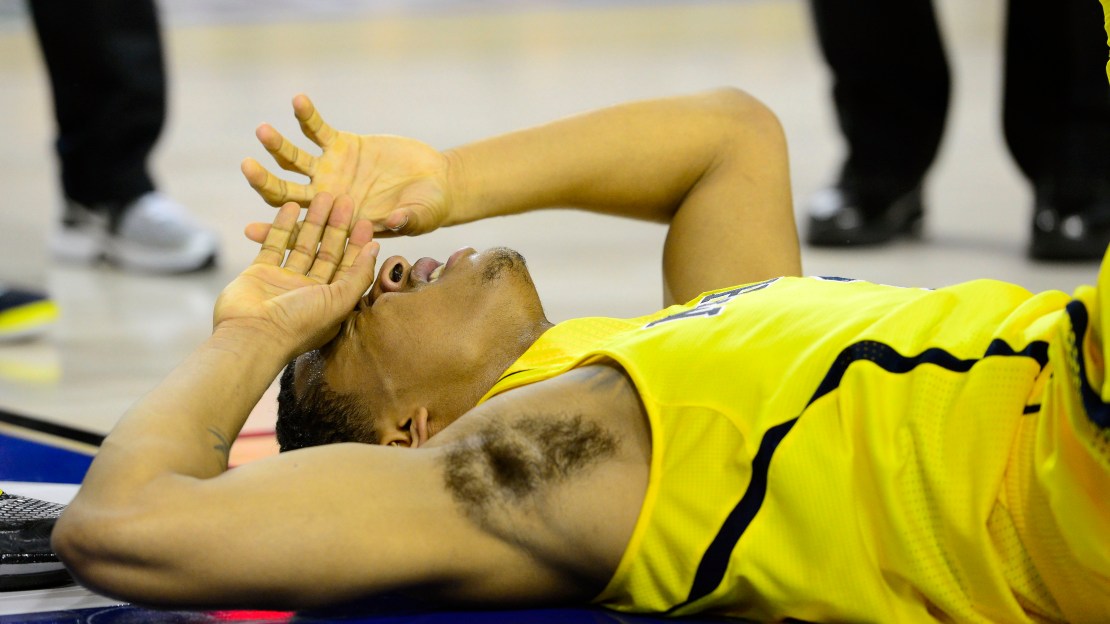 In Monday's national championship, Michigan kept up its impressive tournament run of scoring on the college game's best defenses, but its own defense just couldn't slow Louisville enough to take home the title.

In the first half, Michigan's offensive efficiency came from the unlikeliest of sources. Trey Burke picked up his second foul just nine minutes into the game, and the reins of the attack were handed to freshman backup Spike Albrecht, who had scored a total of 67 points all season. Improbably, Albrecht scorched the nets for 17 points on just seven shots in the first half, including four-for-four on threes. It was the type of performance that can embolden a guy to do just about anything.

John Beilein had made a questionable autobench decision on Burke, who averages only 2.0 fouls per 40 minutes, but Albrecht's shooting made it seem for awhile that he'd gotten away with it.

Of course, Louisville had a secret weapon of their own in the form of Luke Hancock. The George Mason transfer scored 14 points over the final four minutes of the first half, bringing the Cardinals all the way back from a double digit deficit. Spike's heroics suddenly had done nothing but keep Michigan in the game.

In the second half, the Wolverines' inability to get stops was their undoing. Louisville maintained the blistering offensive level set in the first half, while Michigan became mere offensive mortals due to a few too many turnovers. It was a one possession game with six minutes remaining, but the Cardinals then used a 9-2 spurt to build a double digit lead. The Wolverines would keep fighting but were never able to get within one possession again. Michigan fell just a bit short of the ultimate summit.

It really does bear repeating just how phenomenal Michigan's offense was in the NCAA tournament, given the defensive strength of the opposition:

In their six tournament games, the Wolverines faced four of the nation's top six defenses and never failed to score over a point per trip. Only once did Michigan fail to score over 1.1 points per trip. Simply put, the 2012-13 Wolverines have to be considered among the best offensive tournament performers of all time.

Unfortunately, defense is part of the game too. It was permissive defense that nearly got Michigan bounced by Kansas in the Sweet Sixteen, and a porous defense is what ultimately kept the Wolverines from a championship. Louisville destroyed Michigan on the offensive glass, which when coupled with the Cardinals' low turnover rate, led to Louisville getting up 13 more shot attempts than the Wolverines. That's a tough hill to climb, and Michigan's superior two-point shooting (57 percent vs. 44 percent) was not enough to overcome it.

So, after what undoubtedly can be considered a fantastic season, Michigan fans wait. Trey Burke, Tim Hardaway Jr., Mitch McGary, and Glenn Robinson III all have early entry decisions to make, and those decisions will directly impact what we can expect out of the Wolverines this winter. It's easy to forget that Michigan was the youngest team in the NCAA tournament and among the youngest teams in all of D1. Beilein has another good recruiting class lined up to join, with three top-100 recruits. And hey, he'll still have Spike! Regardless of what happens with the NBA draft decisions, the future is bright in Ann Arbor.