Dienhart: To no surprise, Oladipo headed to NBA 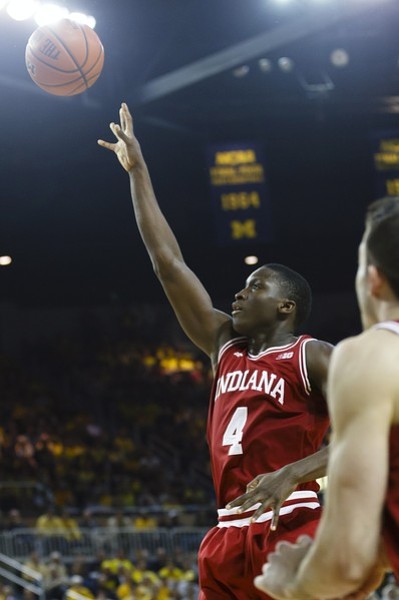 Anyone with Internet access and an NBA draft blog projects the Indiana junior guard to be lottery selection. So, coming out makes sense for the Upper Marlboro, Md., product, who seemingly has done all he can do in college.

Now, the question looms: When will sophomore teammate Cody Zeller announce his future plans? Many speculate we will hear from the 7-footer tomorrow. Last week, Ohio State?s Deshaun Thomas announced he was forgoing his senior season. Other Big Ten stars figure to make decisions soon in what could be an exodus of talent from the conference. Among them: Michigan?s Trey Burke and Tim Hardaway, Jr., and Michigan State?s Adreian Payne, in addition to Zeller.

Oladipo was one of the Big Ten?s biggest stars. He was spectacular this season, averaging 13.6 points, 6.3 rebounds and 2.1 assists in addition to being named an All-American and the top defensive player in the Big Ten. The 6-5, Oladipo took his game to another level this season by developing his shot. He shot 44 percent from 3-point range after shooting only 20 percent as a sophomore and 30 percent as a freshman. The long-range shot was yet another weapon for Oladipo, who has Swiss Army knife versatility that allows him to impact a game on many levels. But for all of his glorious individual accolades, Oladipo will be remembered most for helping lead Indiana back from the brink to elite status and to the program?s first outright Big Ten championship since 1992-93. The Hoosiers (29-7) earned a No. 1 seed in the NCAA tourney, but the season ended prematurely with a loss to No. 4 Syracuse in the Sweet 16.

No doubt, Indiana will miss Oladipo-along with departing seniors Christian Watford and Jordan Hulls–but the Hoosiers will still welcome back a core of good players capable of challenging for a second Big Ten championship in succession. Among the top returnees are guard Yogi Ferrell, forwards Will Sheehey, Jeremy Hollowell and Hanner Perea.

Plus, a gaggle of decorated recruits will arrive on campus, headlined by 6-9 five-star power forward Noah Vonleh, four-star small forward Troy Williams and four-star shooting guard Stanford Robinson. Luke Fischer, a three-star 6-10 pivot, also could be special for Tom Crean, who has this program primed to stay among the best in America-regardless of who leaves from year to year.