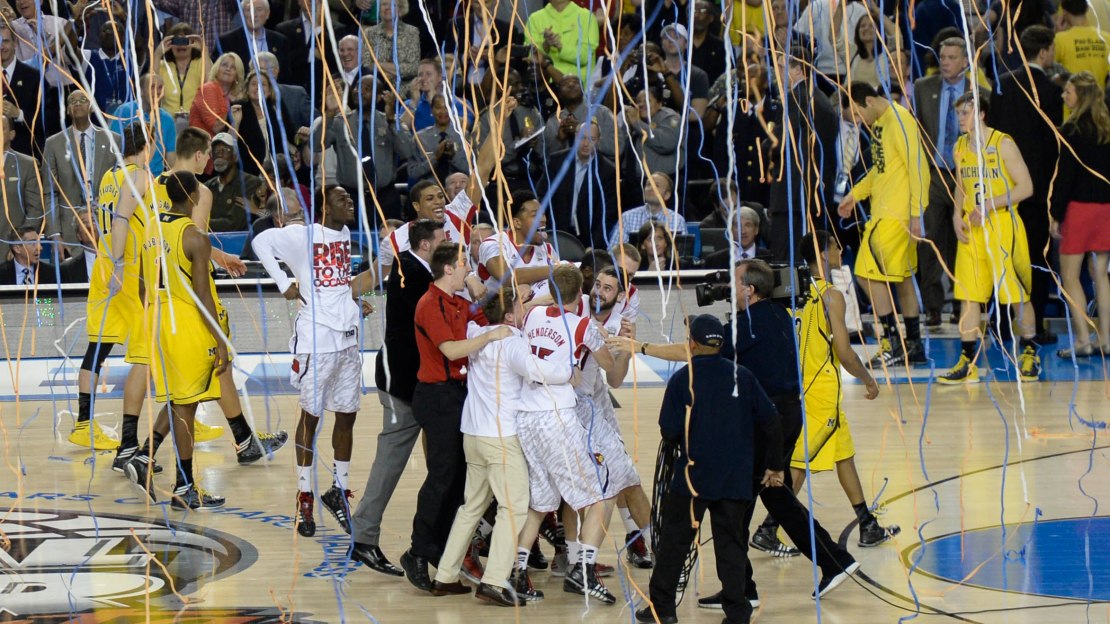 Luke Hancock made all five of his 3-pointers and led Louisville to its first NCAA men's basketball championship since 1986 with a 82-76 victory over Michigan on Monday night.

Coach Rick Pitino added this title to the one he won at Kentucky in 1996 and is the first coach to win a championship at two schools. Earlier in the day, Pitino was elected to the Naismith Memorial Hall of Fame.

Trey Burke had 24 points for Michigan (31-8), which was in the final for the first time since the Fab Five led the Wolverines there in 1993.

FINAL: Luke Hancock scored 22 points and Chane Behanan added 15 points and 12 boards to lead Louisville to an 82-76 victory over Michigan on Monday at Georgia Dome in Atlanta in the National Title game. Louisville (35-5) hit 8-of-16 threes, tallied 18 assists on 28 baskets and grabbed 19 offensive rebounds en route to the win. The Cardinals also got a double-digit contribution from Peyton Siva (18 points). Trey Burke scored 24 points, corralled four rebounds, dished out three assists, made 7-of-11 shots from the floor, and shot 3-of-5 from long range for Michigan (31-8) in the game. Spike Albrecht shot 6-of-9 from the field and scored 17 points for the Wolverines. Michigan hit 52 percent of its field goals (25-of-48). The Wolverines were on fire from beyond the arc during the game, shooting 44 percent (8-of-18). The Wolverines also got double-digit contributions from Glenn Robinson III and Tim Hardaway Jr., who each scored 12.

HALFTIME: Michigan leads 38-37 over Louisville at the half thanks to a productive and breakout game from Spike Albrecht, who has 17 points on 6-7 shooting. The Cardinals should feel pretty good, considering late in the first they trailed the Wolverines by as many as 12 points. Trailing 36-26, Louisville used an 11-0 run to blow past Michigan and take a one-point lead. The Cardinals moved the ball in the first half, accounting for 10 assists on 12 field goals. The Wolverines fired often and fired with accuracy from distance, hitting 55 percent (6-of-11) of their three-point attempts. Michigan had eight offensive rebounds in the first half, leading to second-chance opportunities. Luke Hancock led Louisville in the first half, with 16 points.