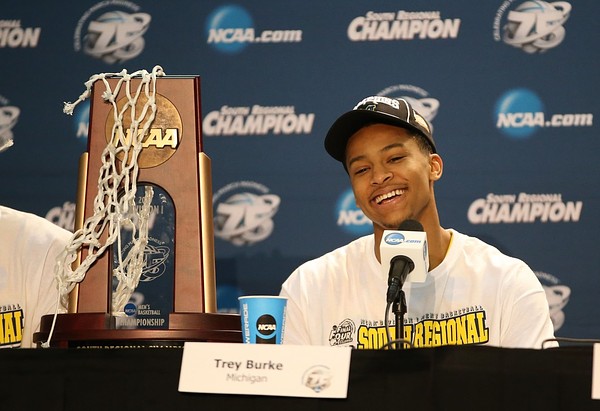 The honors keep rolling in for Michigan?s Trey Burke. And more likely are coming. Let?s start daily links there. The latest Burke bauble: AP player of the year. The only other Wolverine to win the honor was Cazzie Russell in 1966. Yes, it has been that long. And I still can?t believe those are the only two Wolverines ever to win the honor.

Burke probably will win the Wooden Award, which will be announced today. And, he?ll go for the national title this weekend. Yes, it?s good to be Burke. Just how will Michigan deal with Syracuse?s confounding 2-3 in the national semifinal game on Saturday? Get out and run-and hit some shots. Well, it won?t be that easy.

Iowa was unable to seal the deal in the NIT, losing by 20 points to Baylor in the title game last night. No shame there. The Hawkeyes have a bright future with almost all of their key players back next season.

Terry Hutchens of the Indianapolis Star takes a look at the NBA decision-making process for Cody Zeller and Victor Oladipo.

Two dates to keep in mind, Hoosiers fans: April 16 is the NCAA?s date for players to withdraw from the draft and maintain their college eligibility. By April 28, a player who is not automatically eligible to return must declare his eligibility for the draft by notifying the NBA offices in writing no later than 60 days before the draft. I think both will go pro. Every mock draft I look at has both players as lottery picks. If that?s the case, you have to go.

Michael Rand of the Minneapolis Star-Tribune has five interesting points about new Golden Gophers coach Richard Pitino. Some questions from Rand? Has Pitino paid his dues? Can he recruit the Midwest?

And here is a profile on Pitino to get you fired up and offer some insight into one of the most unique hires in school history.

More on the kid coach: Should Pitino hire an assistant with local ties? I say ?yes.?

Most agree that a big key for new Northwestern coach Chris Collins will be assembling a good staff. Well, he?s already making some decisions.

Michigan defensive coordinator Greg Mattison says he?s focusing on the pass rush from the line. No shock there. This is the most critical unit on a Wolverine defense that has a lot of young talent and potential.

Nebraska?s spring game this Saturday isn?t just about developing players. It?s also a good sales pitch to recruits, who can see the passion of Cornhuskers football up close before 50-60,000 people.

Prior to the game, 200 time capsules will be buried to commemorate the opening of the new East stands. Tom Shatel of the Omaha World-Herald wonders what fans will put in those. And what fans in 2062 will think of the contents when they are opened then.

One thing Shatel thinks will still be around in 2062 is Nebraska?s sellout streak.

I will be in Lincoln on Saturday to cover the game. No, I won?t put anything in a time capsule-but I will take a close look at the Cornhusker defense, which is on the spot.

Interesting thought here: Is Iowa?s pink visitor?s football locker room a thinly veiled, light-hearted attempt to gain a competitive advantage or a homophobic shame technique that sets a bad example? Oh, boy. I think we all know where this is headed. Someone call the painters.

My take: These wideouts need to step up for Ohio State?s offense to fully blossom. Hello, Devin Smith.

Jim Boeheim reiterates, again: "I have no plans on retiring."

Tough loss, but a lot of positives can be taken away from Iowa's post season run.

My take: I second that!

Reggie Theus to Cal State Northridge. Remember when some fans were floating his name for the Illinois job?

My take: (I am slapping my hand against my forehead.)

According to FIU AD Pete Garcia, the #Gophers first reached out to Richard Pitino on Monday of this week.

My take: Boy, this came together quickly. Would Pitino had taken the Rutgers job-if offered-instead of Minnesota had it opened sooner? Probably not. But just wondering.