Today's links: Iowa plays on, others plan ahead 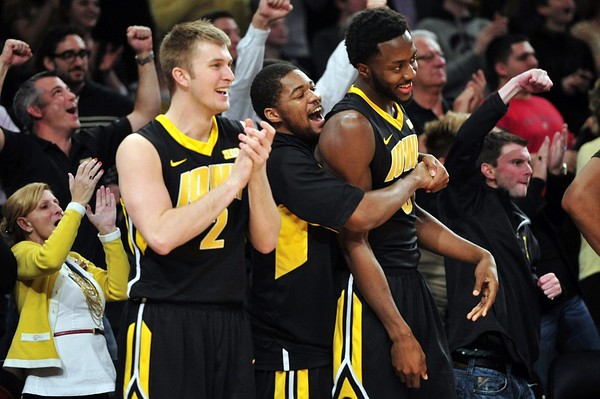 Let?s hear it for Iowa! I said: Let?s hear it for Iowa!! The Hawkeyes beat Maryland last night in the NIT semifinals. Gotta start daily links there. When folding seemed possible, Iowa seemingly found a way to straighten up and seal the deal against the Terps, notes the great Mike Hlas of the Cedar Rapids Gazette.

Now, Baylor is up next in the NIT title game on Thursday night. Here are some photos to commemorate the Hawkeyes big win over future Big Ten foe Maryland.

If that doesn?t stoke you up enough, Herky, listen and watch Iowa forward Aaron White discuss the resurgence of the program in this video.

It?s amazing how winning a few games changes everyone?s perspective, isn?t it? This team has a heck of bright future.

Listen to the ?Monday Morning Quarterback? with Illinois media legends Jim Turpin and Loren Tate. The podcast is right here, as the duo discusses the upcoming Final Four.

Indiana coach Tom Crean has a conundrum on his hands: He has more players committed than scholarships available.

Terry Hutchens of the Indianapolis Star notes Indiana has 16 scholarship players for 13 spots. Even if Victor Oladipo and Cody Zeller leave early for the NBA, as many speculate, one incoming player will still lack a spot. Zeller and Oladipo have until April 16 to withdraw from NBA consideration and retain college eligibility. Schools have until July 1 to notify athletes if year-to-year scholarships are not being renewed. (See where this is going?) I have a feeling this will work out just fine. It did last year, when Indiana faced a similar situation and saw signee Ron Patterson fail to quality and ultimately ink with Syracuse. Yes, THAT Syracuse.

It?s official: freshly-minted Michigan rock star Mitch McGary will return for his sophomore season. He says so right here. Then again, I didn?t there was much chance he would bolt for the NBA after one season, despite his coming out part in the NCAA tourney.

While the pros can wait for big Mitch, here?s a nice look at Michigan?s seven Final Four teams.

I still am infatuated with those Fab Five teams that went to back-to-back Final Fours in 1992 and 1993 as freshmen and sophomores. Maybe it was the presence of Rob Pelinka. Maybe not.

Could Tubby Smith?s buyout jeopardize Minnesota?s quest to build a practice facility? Meanwhile, the search goes on for a new Golden Gophers coach. Could Michigan State assistant Dwayne Stephens be a guy? Hmmm.

This would be ?outside the box? thinking. Heck, what does Minnesota have to lose? Why hire a head coach who was fired elsewhere? Why not take chance on a young, energetic, up-and-coming coach? Again, if you are the Golden Gophers, you have to do something different to stand out and to get an edge. The definition of insanity: Doing the same thing and expecting different results. Be bold, Norwood Teague. Be bold.

I hope Minnesota was watching.

Michigan State junior big man Adreian Payne has a decision to make: Stay in East Lansing or go pro? It?s a difficult call. Payne expanded his game to include a 3-point shot this season to complement his low-post moves and defensive prowess. The guy became a stud.

Illinois coach John Groce has a long to-do list in the offseason with Brandon Paul and D.J. Richardson gone, among others.

Among this chief goals: fill three scholarships. One possibility on the horizon is Seton Hall transfer Aaron Cosby, a guard who will visit Illinois this month and decided between the Fighting Illini and Missouri. Cosby would have to sit out next season but then have two years of eligibility.

More than 40,000 tickets have been sold for the Nebraska spring game that will take place on Saturday. And by kickoff, I bet the number is over 50,000.

This is impressive. More people will be at this game than the Final Four.

And Taylor Martinez may play every snap this fall-if that?s what it takes to win.

All eyes are on the quarterback battle at Michigan State. For now, incumbent Andrew Maxwell is ahead in the competition. The senior looked uneven last season in his first year as a starter.

But keep an eye sophomore Connor Cook and redshirt freshman Tyler O?Connor. This Spartans offense has to improve after struggling mightily last season in a disappointing 7-6 campaign.

Apparently, Ohio State quarterback Braxton Miller took a hit he didn?t appreciate in a recent practice and talked to the defense about it.

Urban Meyer liked the feistiness of his quarterback. Me, too. Don?t take no stuff from nobody.

Penn State fans may enjoy this expansive look at the past of NCAA president Mark Emmert. Very illuminating. You be the judge.

Purdue is demanding a lot from its offensive linemen this spring. They should. The unit struggled last season. Check out o-line coach Jim Bridge in this video discussing the unit. Without a doubt, this group holds a big key to the Boilermakers? success in Year One under Darrell Hazell.

This is all true.

Hoke when asked if uneasy re: qb situation "always a little uneasy, a little concerned" obviously have to keep Devin healthy

Well, if Devin Gardner gets hurt, the Michigan offense probably is in a lot of trouble.

Aaron White: "I've never been so happy not to go home." #hawkeyes

Who can argue with the Iowa forward? He?s in New York about to play for the NIT title. Sorry, Iowa City.

Nice to see Iowa in the NIT final. People laugh at that tournament until they're about to win it. Playing at MSG isn't shabby either.

I like the event. Heck, I think winning the NIT is better than being one-and-done in the NCAA tourney.

If the ESPN NBA draft guru has both of these guys rated that highly, don?t they have to go?

Collins asked if father Doug could ever join staff: "He's a head coach right now in the NBA, so it'd probably be quite a pay cut."

But wouldn?t it be neat if they did work together in Evanston? Sure it would.