Michigan has lots in common with 1989 title team 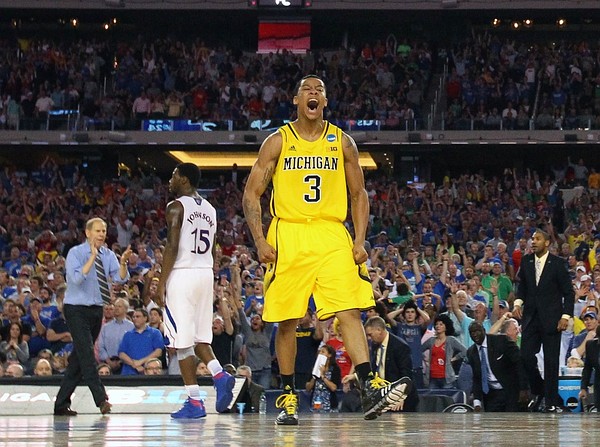 Of the seven Big Ten teams selected for the NCAA tourney back on March 17, I didn?t think Michigan would be the last one standing. Not by a long shot. But, here are the Wolverines, heading to Atlanta for the school?s first Final Four since it made back-to-back runs in 1992 and 1993 behind the ?Fab Five.?

In some ways, though, Michigan?s run to college hoops Holy Grail shouldn?t be a shock. The similarities between this Michigan squad and the one that claimed the school?s last championship in 1988-89 are striking.

To start with, many have referenced that ?88-89 season as one of the greatest in Big Ten annals when discussing the power of the conference this season. Illinois, Indiana, Michigan, Iowa and Minnesota all were formidable and earned NCAA bids. Ohio State didn?t make the Big Dance but it spent many weeks ranked. This season, the Big Ten earned seven bids and saw four schools finish the regular season ranked in the top 10 of both major polls.

But back in 1989, Michigan?s hopes seemed to take a hit when Bill Frieder announced he would leave after the season to take the Arizona State job. That rankled Michigan A.D. Bo Schembechler, who famously vowed: ?A Michigan man will coach Michigan, not an Arizona State man."

So, Schembechler told Frieder to leave for ASU ASAP and promoted cherubic Steve Fisher to take the reins–on an ?interim? basis. Steve Who? Exactly. But Fisher had helped the team finish in third place in the Big Ten with a 12-6 record (the same mark as this year?s Michigan squad) and rank as high as No. 2 in the nation. Well, you know what happened next. The Wolverines received a No. 3 seed, while Illinois (No. 1) and Indiana (No. 2) were seeded higher. No matter, Michigan proceeded to march to the national championship.

Along the way to the Final Four in the Seattle Kingdome, Michigan downed No. 14 Xavier, No. 6 South Alabama, No. 2 North Carolina and No. 5 Virginia. In the Final Four, the Wolverines dumped No. 1 Illinois and the famed ?Flyin? Illini,? led by Kendall Gill, Marcus Liberty, Kenny Battle, Stephen Bardo, Nick Anderson and Lowell Hamilton. Then, in the championship game, Michigan dumped No. 3 Seton Hall, 80-79, in OT, to finish 30-7-which ironically is the Wolverines? record right now.

Fast-forward to this season.

Michigan ranked as high as No. 1, but ultimately finished in fourth place in the Big Ten with that aforementioned 12-6 conference mark. On Selection Sunday, the Wolverines were given a No. 4 seed, while Indiana (No. 1), Ohio State (No. 2) and Michigan State (No. 3) all earned higher seeds.

And the Wolverines were bringing little mojo to the Big Dance, having lost two of three and going 3-3 over their last six games. Like its 1988-89 brother, this certainly didn?t look like a team that was primed for a deep NCAA tourney run.

But, here is Michigan. On the way to Atlanta, the Wolverines have downed No. 13 South Dakota State, No. 5 VCU, No. 1 Kansas and No. 3 Florida. Up next: No. 4 Syracuse. Beat the Orange and their vaunted 2-3 zone defense, and a date with No. 1 Louisville or No. 9 Wichita State looms in the championship game. So, just like in 1989 when it beat Seton Hall of the Big East, Michigan may have to beat a Big East team again in Louisville to win the championship.

Like the 1989 team?s run that was fueled by Rice, this Michigan squad is being propelled by a hot shooter in Trey Burke. The sophomore All-American began with a modest six points vs. South Dakota State in the opening NCAA title. Since then, he has poured in 18, 23 and 15 points.

Burke?s game vs. Kansas in the Sweet 16 already has been etched into Michigan lore, as all 23 of Burke?s points came in the second half and overtime to rescue a Wolverines team that looked overmatched and doomed vs. the big, veteran Jayhawks. His impossibly long 3-pointer in the dying seconds of regulation forced overtime to help the Wolverines cap a furious comeback. Burke added to his growing legend by fighting through a stomach issue and back pain to help lead a rout of Florida on Sunday in the Elite Eight.

Wait, there?s more to compare between today and 1988-89. John Beilein?s team is an explosive squad that wants to play games in the 70s or 80s, as it is blessed with myriad scorers in Burke, Tim Hardaway Jr., Glenn Robinson III, Nik Stauskas and Mitch McGary. Fisher?s squad in 1988-89 liked to get up and down the court, too, with scorers like Rumeal Robinson, Loy Vaught, Terry Mills and Sean Higgins in addition to Rice.

A difference between then and now: Fisher?s team eventually saw Rice (4th ), Robinson (10th), Vaught (13th) and Mills (16th) become first-round draft choices. And Higgins was a second-round selection. That may end up being the biggest difference between this year?s Wolverines squad and the 1988-89 club. Burke, Robinson and McGary look like eventual first-round picks. Hardaway may be a second-rounder. Is that it?

Is that enough NBA star power to win this NCAA title? It?s going to be fun to find out, as the 2012-13 Wolverines look for a place in school and NCAA history alongside the 1988-89 Michigan club.