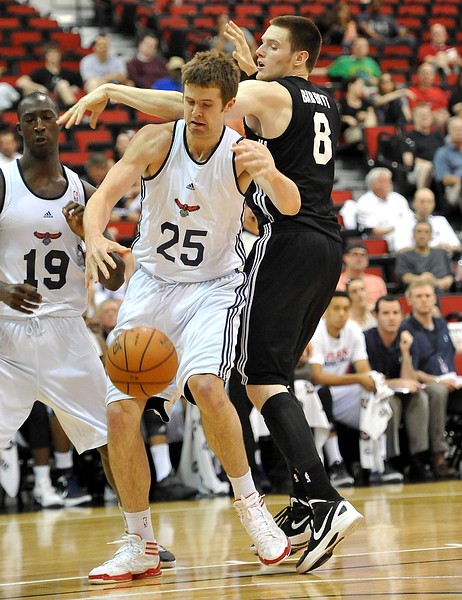 Travel across the country for an NBA pre-draft workout, or walk down the stage and receive your college diploma? That?s the dilemma former Northwestern basketball standout John Shurna faced following his senior year. I recently spoke with Shurna over the phone as he shared that story and others in my latest installment of ?Big Ten Tales.?

Shurna had an exceptional collegiate career as a four-year starter for the Northwestern Wildcats from 2008-12. The 6-foot-9 forward was a three-time All-Big Ten Conference Selection and was named an honorable mention All-American in 2012 by the Associated Press.

Shurna closed out his career at Northwestern as the schools all-time leading scorer in both a single season and a career.

After school, Shurna played in the 2012 NBA Summer League with the Atlanta Hawks and is now playing professionally in Strasbourg, France in the LNB Pro A League (see Shurna's player page on www.LNB.fr). I asked him to tell us about his experience in France as well as a few great, untold stories during his playing days at Northwestern.

BTN.com: Tell me about your experience playing in France and what type of adjustments you have had to make since moving there?

Shurna: This has been a great experience so far and I?m really enjoying my time over here. I?ve been here since late November, so just around four months now. Strasbourg is a very cool city, and the people here are great.

As far as basketball goes, this is definitely a different style of game out here. The schemes are different, and the playing style in general is different. I?m on a team with a lot of veteran guys, so they have been really helpful throughout my adjustment period. We are coming down the final stretch here with about four or five games remaining in the regular season.

BTN.com: What kind of role do you play for your team?

Shurna: Right now, I?m looked at as an energy guy. I?m one of the first guys off the bench who can come in and give our team a bit of a spark. I started out playing power forward, but have been playing a little more small forward as of late. Whatever I can do to help the team win, works for me.

BTN.com: Here's a look at Shurna's Strasbourg team via a video from his team's website. Shurna is No. 4:

BTN.com: Now that you have been overseas for a while and seem to have developed a bit of a feel for everything, is this something that you would like to stick with, or is the ultimate goal to make an NBA roster one day?

Shurna: I think my goal is to ultimately compete at the highest level possible, and I believe that is in the NBA. I?d like to keep playing this game as long as I can continue to improve and play at a high level. I?m not sure how long that is, but right now, I?m really enjoying myself at the moment because basketball is a game I really enjoy.

Since I went to Northwestern, I am fortunate because of its prestige and everything I learned while I was there. That allows me to have great opportunities outside of basketball. But as it stands right now, I?d like to keep playing as long as the game is still enjoyable.

BTN.com: Speaking of the NBA, can you take me through that process leading up to the NBA Draft and what that was like for you?

Shurna: Yes, I was very grateful for the opportunity to tryout in front of NBA teams. The process might have seemed stressful or tiring at times, but in those moments, I just tried to take a step back and realize that very few people have this opportunity and that I?m incredibly fortunate to have the opportunity to try and achieve my dream. My agent did a great job of giving me the opportunity to be seen by as many teams as possible, even though that did include missing my college graduation.

BTN.com: I?m sorry, you mean to tell me that you were a four-year starter at one of the most prestigious schools in the country, and you weren?t there for your graduation? How did that work?

Shurna: That?s right. I found out several weeks before my graduation that I had been invited for a pre-draft workout with the Los Angeles Clippers, which means I would have to travel out to L.A. on the same Friday that my graduation ceremony fell on. My whole family was all set to come out to Evanston and watch me graduate, but I had to tell them that I wasn?t going to be there.

BTN.com: How tough was that for you? On one hand, you have a workout with an NBA team, which I assume was a huge deal for you. But on the other hand, you have your graduation, which was probably a dream come true as well, right?

Shurna: Yeah, that?s exactly right. I was still going to receive my diploma obviously, but having an NBA workout was something I wasn?t going to pass up. It was an opportunity of a lifetime, and I was probably going to be kicking myself if I didn?t go because not that many people get a chance to be in that type of situation.

BTN.com: So what ended up happening?

Shurna: My workout went well, and I was able to fly back to Evanston and be with my family and friends the following day and celebrate my graduation after all.

Shurna: I think that my favorite untold story with my teammates happened during my junior year when we had a road game. During that game, a lot of our starters were in foul trouble, so coach called on one of the guys who had not played yet to go in the game. When he went to check in, something happened where he changed his mind and had him sit back down. It turned out that he didn?t get in for the rest of the game, and we found out later that maybe that was a good thing.

BTN.com: What do you mean? Why was it a good thing?

Shurna: Well after the game, when coach was done talking, we all went to change and it turns out that he forgot to put his jersey on under his warm-ups. If he had ended up going in the game, which he was very close to doing, he would have taken off his warm-ups and been without his jersey, which would have probably been pretty embarrassing.

BTN.com: Did someone notice it, or did he tell everyone after the fact?

Shurna: When he did notice it, he pointed it out to the guys on the team. Needless to say, everyone started laughing about that.

BTN.com: Now that?s a great, untold story. It probably would have been a finalist on Sportscenter?s Not Top 10 Plays. Are you able to keep in contact with your former teammates at Northwestern?

Shurna: Yeah, absolutely. I keep in contact with guys that have graduated and guys who are still on the team. I made it a point to watch every game I possibly could this season and was able to for the most part, pending on what channel it was being broadcasted on.

BTN.com: What was your favorite thing about playing basketball in the Big Ten?

Shurna: My favorite thing about playing in the Big Ten is how you knew you were playing against great competition, night in and night out. From that, you?re able to build relationships with other players. You have that bond and respect with other players, knowing that you played in the top conference in the country. Everything in the Big Ten is top notch from the universities themselves, the competition, players, coaches, fans and environments. I?m not sure you could ask for anything better than that.