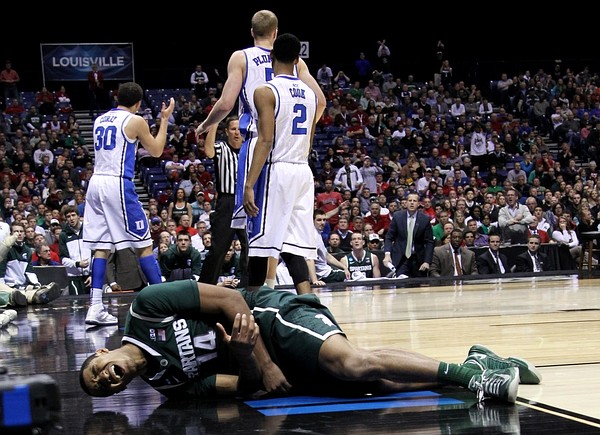 Coming in, most felt Duke needed to win the battle at the 3-point and free-throw lines, while the Spartans needed to win the clash in the paint. Which team could impose its will on the other? It was the Blue Devils. Scoring came much easier for Duke, which was propelled by the sweet shooting of Seth Curry, who tallied a game-high 29 points and hit 6-of-9 3-pointers. And the Blue Devils played good defense, especially in the second half. At one point, MSU went almost 14 minutes between field goals in the second half. The Spartans won the battle on the boards, 38-29. But MSU had 11 turnovers to Duke?s six.

This is the second season in a row the Spartans lost in the Sweet 16.

Key moment: Duke went on a 9-0 run to take a 47-38 lead with 13:33 to play in the second half, benefiting from four consecutive Michigan State turnovers. Then at the 8:42 mark, Duke took the first double-digit lead of the night, 56-46, on a Rasheed Sulaimon jumper. The Blue Devils never were too seriously threatened from there on out, cruising across the finish line. Duke will play No. 1 Louisville on Sunday, the only matchup between No. 1 and No. 2 seeds in the Elite Eight.

Key player: Keith Appling needed to have a big game-and did. The junior point man tallied a team-high 16 points, hitting 5-of-8 shots. But Adreian Payne was the only other Spartan in double-figures with 14 for a MSU squad that nailed only 3-of-13 from beyond the arc (23 percent). Big Ten freshman of the year Gary Harris needed to play better but hit just 2-of-11 shots (0-for-3 from 3-point land) and had six points.

Key number: 92, Duke?s free-throw percentage. The Blue Devils connected on 24-of-26 from the charity stripe. Rasheed Sulaimon drained 12-of-14 freebies. This was a big difference in the game that Michigan State trailed by just one at halftime.

What?s next: Michigan State finishes 28-8 in what was a good-but-not-great season. The Spartans will bid good-bye to senior Derrick Nix, but the other key players have remaining eligibility: Keith Appling and Adreian Payne are juniors; Branden Dawson and Travis Trice are sophomores; Gary Harris and Denzel Valentine are freshmen. Next year could be even better, as long as Payne doesn?t opt to turn pro.