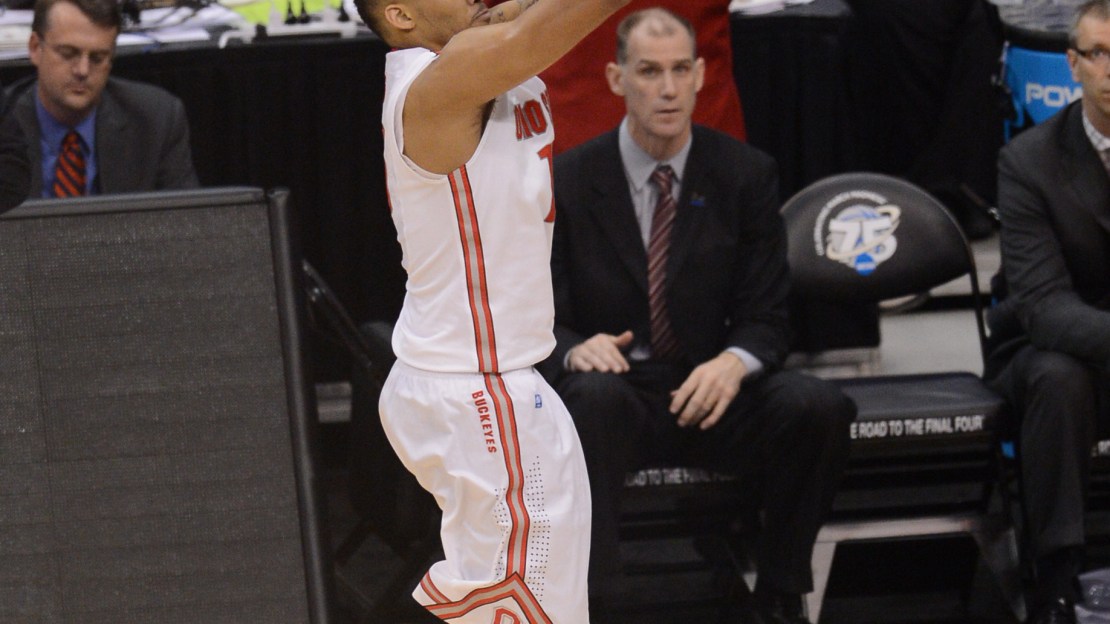 LaQuinton Ross hit the tiebreaking 3-pointer with 2 seconds to play, and Ohio State advanced to the brink of its second straight Final Four appearance with a 73-70 victory over Arizona on Thursday night in the West Regional semifinals.

Ross, the Buckeyes' remarkable reserve, scored 14 of his 17 points in the second half for the second-seeded Buckeyes (29-7), who rallied from an early 11-point deficit and weathered the sixth-seeded Wildcats' late charge for their 11th consecutive victory since mid-February.


FINAL: LaQuinton Ross hit the game-winning shot with two seconds remaining and Ohio State rallied past No. 21 Arizona 73-70 on Thursday at Staples Center in Los Angeles in the Sweet 16. The field goal was the finishing touch on Ross' 17-point performance in a dramatic win for Ohio State (29-7). After going into the break with momentum, the Buckeyes kept their foot on the gas to start the second half. Ohio State trailed 33-22 with 5:57 to go in the first half, but went on a 22-5 run over the next 10:54 to take a six-point lead. Sam Thompson sparked the Buckeyes, as he had 11 points and corralled eight rebounds for Ohio State in the game. The Buckeyes went 22-of-26 from the charity stripe as a team (85 percent). Ohio State also got double-digit contributions from Aaron Craft (13 points) and Deshaun Thomas (20 points). The Wildcats also got a double-digit game from Solomon Hill (16 points). The Buckeyes push their winning streak to 11 games with the victory.

HALFTIME: Things haven't started too well for Ohio State against Arizona in tonight's round of 16 game and the Buckeyes are  down 38-34 going into the second half. In the first 20 minutes, Deshaun Thomas scored 16 points and shot 6-of-11 from the field. Ohio State fired often and fired with accuracy from distance, hitting 50 percent (4-of-8) of its three-point attempts. After already giving up eight offensive rebounds to the Buckeyes, Arizona will have to keep Ohio State off the boards in the second half. The Wildcats are shooting 56 percent (5-of-9) on three-pointers. Seven Arizona players have scored. Kevin Parrom is leading Arizona. The senior has five points and four rebounds.