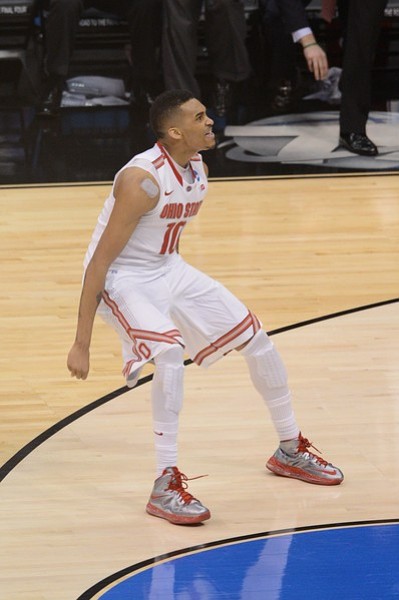 For the second game in a row, Ohio State needed a last-second shot to pull out victory. Aaron Craft did the honors vs. Iowa State in the third round. This time, LaQuinton Ross threw the dagger that killed Arizona to lead the Buckeyes to their 11th victory in succession.

Why Ohio State won: Ohio State never had come back from a double-digit deficit all season but did so tonight, trailing by as many as 11 points twice in the first half. The Buckeyes finished the opening 20 minutes on a 12-5 run to close to 38-34 at intermission. And then, the Buckeyes came out smoking to start the second half, scoring the first 10 points to take a 44-38 edge. In fact, OSU opened on a 16-4 run to take a 50-42 edge with 11:50 left in the game before Arizona tied it late and then Ross won it.

Key moment: Sophomore LaQuinton Ross drained a long 3-pointer with 2.1 seconds left to give Ohio State a 73-70 lead. Moments earlier, Arizona tied the game after Mark Lyons converted a 3-point play following an Aaron Craft miss. Ross was spectacular in the second half, scoring 14 points to finish with 17. He hit 5-of-8 shots off the bench, knocking down both of his 3-pointers-including that last huge one to win the game.

Key player: Deshaun Thomas. The franchise did it again, showing an uncanny knack to score from just about anywhere on the court. Thomas hit 7-of-14 shots and notched a team-high 20 points. The junior also hit 3-of-8 from 3-point range, as OSU finished shooting 53 percent from beyond the arc (7-of-13) compared to 30 percent for Arizona (6-of-20).

What?s next: Ohio State is in the Elite Eight for a second season in a row and will play the winner of the No. 12 LaSalle-No. 9 Wichita State game for the right to go to the Final Four. It would be Thad Matta?s third trip to the Final Four-and second in a row.