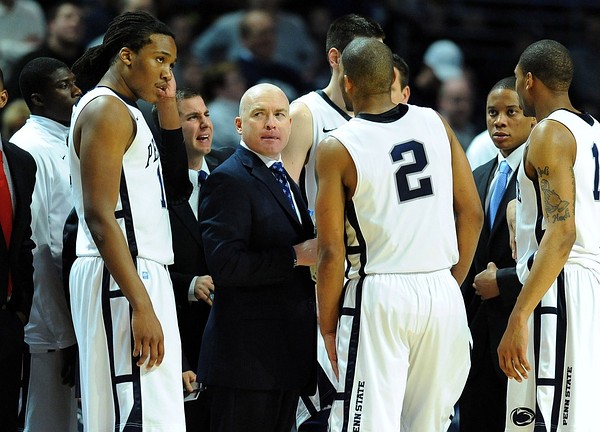 On Wednesday night's "Big Ten Basketball & Beyond: Tournament Edition," Penn State coach Patrick Chambers was in studio to break down the Big Ten's four Sweet 16 matchups and talk about his Nittany Lions. Watch Chambers on set now and see our Q&A with him in this post.

BTN.com: People are talking about it, and it's probably not very likely, but how likely is an All-Big Ten Final Four?
Chambers: I think it is likely. I think the Big Ten, with the way its playing defense and how well the four teams are playing, I think there's a very good chance of it happening.

BTN.com: Which Sweet 16 matchup involving the Big Ten most intrigues you?
Chambers: I would say that Indiana-Syracuse game. It brings back memories of the (1987) national championship game, it brings back my Big East roots, because I was in the Big East. I knew Syracuse and its matchup zone pretty well. It will be interesting to see how Indiana counterattacks that and see how they respond after that Temple game.

BTN.com: How does Indiana beat the much-talked-about zone?
Chambers: They have to make 3s. They have to put it inside, too. Cody (Zeller) has to have a big game. Syracuse has some pretty good, pretty strong, solid bigs. They have to come up with a better offensive output than they did against Temple.

BTN.com: Which Big Ten team has surprised you the most in the Big Dance?
Chambers: I would say Michigan. They're bigs are playing so well, specifically Mitch McGary. He's been a double-double machine ever since the tournament started. His energy level, his conditioning, how hard he plays, that's elevated him. Now people have worry about him, where before you just had to defend the perimeter and make sure Trey Burke didn't kill you. Welp, you can't do that now. You've got some challenges there because they spread you out and Burke does a great job spacing the floor.

BTN.com: But you had some success against Michigan. How'd you do it, and have coaches called for pointers?
Chambers: (Laughter) I won't reveal who, but, yes, they have called. We had success because we caught them at the right time. But they are jelling really well now and playing at an extremely high, high level. Peaks and valleys throughout the year and how do you take that valley back into a peak, that's what it's all about.

BTN.com: No, seriously, you all gave the Wolverines some unexpected fits. How did you do it?
Chambers: Yeah. We did a pretty good job of taking away their 3s. John Beilein teams are anywhere from seven to eight 3s a game, and that's what makes them effective. But we also tried to take away Trey Burke and his vision and wear him down. Really, you do the best you can to slow them down. But they have so many weapons right now.

BTN.com: OK, gonna put you on the spot: How many Big Ten teams will make the Final Four?
Chambers: Oh, wow! I think at least two. I would definitely say two. Which two, I'm not sure yet. But Michigan State's got a heck of a chance, the way they're playing and how ferocious they are right now. And I would think Indiana if they can get it going again after that Temple game. I think those two have a real good chance.

BTN.com: Let's talk about your guys. Any expectations for next year?
Chambers: You know what, I don't put any crazy expectations in the offseason, because so many crazy things can happen between now and Oct. 15. We're just looking forward to Timmy (Frazier) getting back 100 percent healthy. That's why we're going to do a foreign tour, to get him some work. He'll be a little rusty. I think what we saw out of D.J. Newbill, he's a stat-sheet stuffer. He did a great job. And Jermaine Marshall, he showed flashes of the type of player he could become. He got very consistent, especially in the month of February. He did some things I don't think a lot of Big Ten teams thought he could do. The fact those two (Newbill and Marshall) averaged over 30 points a game in the Big Ten, I mean, wow. It's Burke and Hardaway and then them. So we're excited.