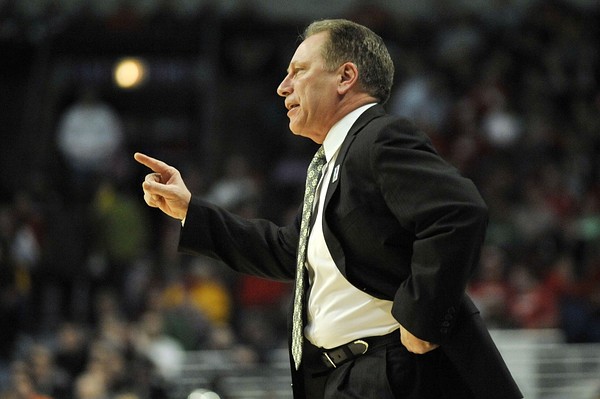 Could the Big Ten advance four teams to the Final Four?

It?s a question that has been kicked around since the NCAA field was whittled to 16 teams on Sunday night. And with a Big Ten team still in each region, it?s possible: No. 1 Indiana is in the East; No. 2 Ohio State in the West; No. 3 Michigan State in the Midwest; No. 4 Michigan in the South.

The likelihood of it happening may be slim. Why? It?s never happened before. The Big East advanced three teams to the Final Four in 1985: Georgetown, St. John?s and Villanova, with the Wildcats shocking the world by knocking off the Hoyas in the famous ?perfect game.?

But, how big of a shock would it be if all four Big Ten teams did make it to Atlanta for the Final Four? It may not be such a crazy notion. The conference has been hailed as the nation?s best all season, dating back to the preseason when Indiana was No. 1 and on through Selection Sunday when seven teams earned invites and four took top-four seeds. And, so far, the Big Ten hasn?t disappointed in March, forging a 10-3 record and producing 25 percent of the Sweet 16.

"I think we earned our keep, again, over the 18 grueling games and that Big Ten Tournament," Spartan coach Tom Izzo said to the media in Michigan this week. "Now this is frosting on the cake. Does it help? I'm sure it helps in perception. Does it help in my mind? No, I already thought it was (the best conference)."

Izzo?s Spartans were the last Big Ten team to win the national championship, cutting down the nets in 1999-2000. Twelve seasons have passed since Michigan State reigned. And since then, schools from the ACC (Duke, Maryland, North Carolina); Big East (Syracuse, UConn); SEC (Florida, Kentucky); Big 12 (Kansas) all have won national championships.

The Big Ten waits. And waits.

Before the Spartans won in 2000, you had to go back to Michigan in 1988-89 to find another Big Ten national crown. And, if the league comes up short this year, it will leave some unsatisfied despite all the Big Ten already has accomplished.

?To some," Izzo said, "it won't be validated unless the Big Ten wins a championship."

Izzo is correct, of course.

Which Big Ten schools have the best chances to reach the Final Four? Here is how I rank their chances.

1. Ohio State. The No. 2 Buckeyes are hot, riding a 10-game winning skein. And they are in a West Region that has been blown apart with No. 1 Gonzaga, No. 3 New Mexico, No. 4 Kansas State, No. 5 Wisconsin all eliminated. Beat No. 6 Arizona is in the Sweet 16, and Ohio State would play the winner of No. 9 Wichita State-No. 12 LaSalle in the Elite Eight if it dispatches the Wildcats

2. Indiana. The No.1 Hoosiers are in an East Region that is the only one that still has all four top seeds. But No. 2 Miami (Fla.) received a blow when it was announced big man Reggie Johnson is out with a knee injury. That softens the path of Indiana, which will play No. 4 Syracuse in the Sweet 16 and the winner of No. 2 Miami and No. 3 Marquette if it beats the Orange.

3. Michigan. The No. 3 Wolverines will be pressed to get by No. 1 Kansas in the Sweet 16 in the South. But if Michigan can do it, the winner of No. 3 Florida-No. 15 Florida Gulf Coast looms. And the Wolverines match up well with those two schools.

4. Michigan State. The Spartans have a lot of heavy lifting if they want to get out of a loaded Midwest bracket. First, Michigan State must play No. 2 Duke. Then, No. 1 Louisville figures to loom, if it gets by upstart No. 12 Oregon.