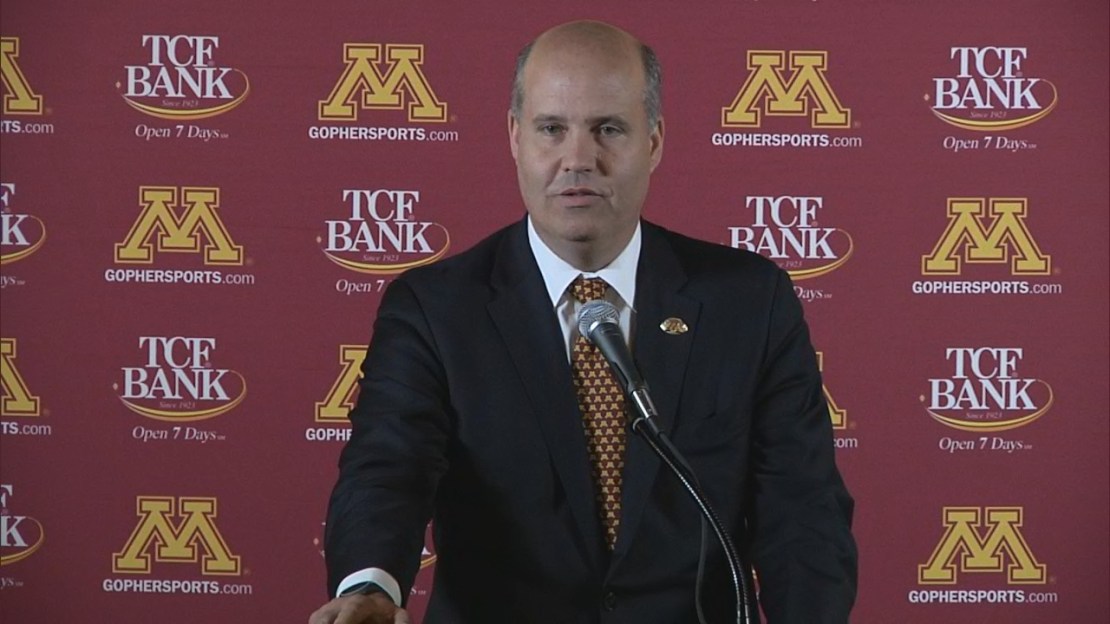 The firing of Minnesota coach Tubby Smith resonated across Big Ten country and the nation, and most of the reaction was negative. So, I have to start daily links right there-even with postseason basketball in full churn. Legendary columnist Sid Hartman of the Minneapolis Star-Tribune says the Gophers haven?t had much success hiring big-time coaches. He?s correct, but why stop trying? And am I the only one in the galaxy who knows Smith was 46-62 in Big Ten games at Minnesota?

The Minneapolis Star Tribune wrote an editorial that basically said Tubby had his chance. Amen. Asking fellow coaches how they feel about one of their own being fired is a waste of time. What are they gonna say?

Tom Powers of the St. Paul Pioneer-Press says that firing Smith, who was a "sure thing," is an awful gamble. A sure thing? What exactly was Tubby a ?sure thing? about? Finishing with a lousy Big Ten record and doing absolutely nothing in three NCAA tourneys? Is THAT the ?sure thing? Minnesota is giving up? So laughable.

Hey, lookie here: Someone who isn?t crying about Tubby Smith?s firing. Thank you, Pat Forde of Yahoo! Sports. Sadly, only national guys typically can write stuff like this. They don?t need to worry about being ?chums? with coaching staffs.

The popular choice to replace Smith is VCU?s Shaka Smart, who was hired at the school by current Minnesota A.D. Norwood Teague.

On to tourney news ?

Of the four Big Ten teams left in the Big Dance, No. 3 Michigan State arguably has the most challenging road in the Midwest Region. First, the Spartans must play No. 2 Duke. Win that, and a date with No. 1 Louisville likely looms for Michigan State. See what Tom Izzo thinks of that in this video.

Personally, I don?t like MSU?s chances. The guard play scares the heck out of me.

Can Michigan win a national championship? Why not, says Nick Baumgardner of MLive.com. But to do so, the Wolverines will first have to walk through No. 1 Kansas. Still, you have to like Michigan?s chances in an NCAA field that doesn?t feature any true giants.

Wanna read yet another story on how Iowa star Roy Devyn Marble is influenced by his father? Here you go. Marble is on a roll in the NIT, scoring an aggregate 54 points in the first two games. A game at Virginia on Wednesday is next.

Is Ohio State lucky to be in the Sweet 16 after that harrowing victory over Iowa State? Doug Lesmerises of the Cleveland Plain Dealer tells you what he thinks in this video. Me? I don?t believe in luck, which is merely preparation meeting opportunity. OSU made the plays down the stretch.

Finally-mercifully?-Purdue?s hoop season is over, with the Boilermakers losing at home to Santa Clara in the CBI. Hey, at least Purdue took the bid and sought to improve by continuing to play with a young team that has a bright future.

The Boilermakers led at halftime but allowed 53 points in the second half. (Think about that for a minute.) Purdue finishes 16-17, its first losing mark since Matt Painter?s debut in 2005-06. Next season is going to be very interesting in West Lafayette.

One last post-mortem on Illinois? season from Herb Gould of the Chicago Sun-Times, which ended in a blaze of glory in a loss to Miami (Fla.) in a third-round game. In the end, John Groce?s debut season was a success, right? Yep. If not for that blown out-of-bounds call in the waning moments vs. the Hurricanes, the Illini may be in the Sweet 16.

Look, we all know Nebraska has a young defense that will require patience as it matures and tries to rebound from a difficult 2013.

But, no doubt, practicing against a veteran Husker offense that figures to be among the best in the nation next season only can hasten the development of this much-maligned unit. At least that?s the hope.

With Illinois? hoop season over, Loren Tate of the Champaign News-Gazette decided to check in on the Illini football squad. And, he likes what he?s hearing. Really.

Still, as Tate notes, Illinois faces challenges, especially on offense. The attack?s 200 points scored were its fewest since the advent of a 12-game schedule in 2006. New offensive coordinator Bill Cubit will be challenged to milk more out of talent-challenged unit with a line that was a mess in 2012.

The Iowa running back situation has been-What?s the word I?m looking for?-bizarre. Injuries and transfers have wrecked the position in recent years. But, better days may be ahead. And, I emphasize ?may.?

Many Penn State fans still are upset with the severe NCAA sanctions that the school was handed in the wake of the Jerry Sandusky scandal. Well, NCAA president Mark Emmert said on a recent radio show that he has no plans to reduce the sentence. So, stop squawking, accept your fate and move on.

"We're confident in the decisions that we made," Emmert said. "The facts were the facts and we operated on those. I guess if somebody were to come forward with a whole new set of facts, that would change the world.

"But otherwise, we're comfortable with where we are and know that we did it the right way."

Beilein said he won't call Izzo or matta to ask about Kansas because they're still playing. Doesn't want to bother them.

My take: I?m guessing Beilein has a few other buddies in the biz who can help him with reconnaissance.

Maybe I'm in the minority, but I'm not surprised Tubby Smith was fired. Politics are local & there were some big hitters who were not happy

My take: No doubt, this likely goes beyond wins and losses. It always does.