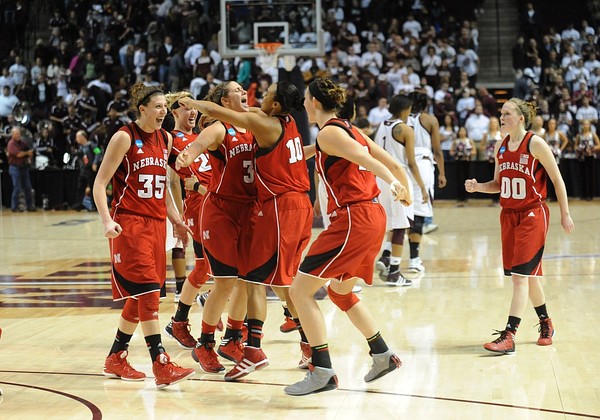 Jordan Hooper Hooper scored 21 points and Lindsey Moore had 20 points and a season-high 10 assists to lead Nebraska to a 74-63 win over Texas A&M on Monday night in the second round of the NCAA tournament.

Here's a look at the four games Tuesday night.

Louisville coach Jeff Walz has liked Purdue forward Drey Mingo's game since he recruited her back in high school. Now he hopes she misses every shot against his Cardinals. That's because a trip to the Oklahoma City regional semifinals is on the line Tuesday night in the NCAA tournament when Walz and his fifth-seeded Louisville Cardinals host Mingo and No. 4 seed Purdue. Read the preview.

Notre Dame (32-1) will put its perfect road record on the line against the Hawkeyes (21-12). The Fighting Irish have won at Connecticut, Tennessee and everywhere else in this remarkable season, and they're confident they can do the same at Iowa. Read the preview.

Penn State coach Coquese Washington would like to believe her team's experience beating LSU on the Lady Tigers' home court in the second round of last year's NCAA tournament would bode well for Tuesday night's rematch. She'd be pleased if LSU's relative shortage of healthy players was something Penn State could exploit. Read the preview.

Check out these photos from Nebraska's win on Monday.