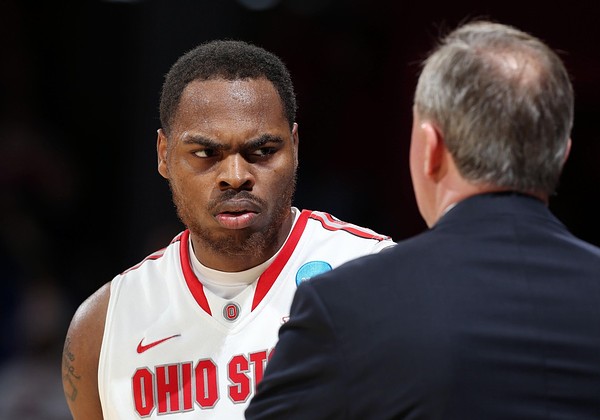 The dust has cleared and only 16 teams are standing in the NCAA tourney-four of them are Big Ten schools. The league more than acquitted itself in the opening three rounds of the Big Dance, forging a 10-3 mark from the seven teams that competed.

No. 5 Wisconsin was the only Big Ten team that failed to win a game, falling to Ole Miss. No. 11 Minnesota (UCLA) and No. 7 Illinois (Colorado) each won a game before falling to Florida and Miami (Fla.), respectively, in the third round.

No. 1 Indiana, No. 2 Ohio State, No. 3 Michigan State and No. 4 Michigan all are in the Sweet 16. And each has a good shot to advance to the Final Four. Here?s what I like-and don?t like-about each squad?s chances.

No. 1 Indiana vs. No. 4 Syracuse in East
Possible Elite Eight: vs. No. 2 Miami (Fla.)-No. 3 Marquette winner
Why it can advance: After finding a way to win a game vs. Temple it had a good chance to lose, Indiana has to feel like a team of destiny. The Hoosiers are the most offensively gifted club in the tourney with players like Victor Oladipo, Cody Zeller, Christian Watford, Will Sheehey, Jordan Hulls and Yogi Ferrell all capable of big scoring games. And Indiana can play a variety of ways and still win-running game, halfcourt. Defense is an underrated aspect of Tom Crean?s team, as well. Bottom line: This team has it all.
Why it could fail: Yes, Indiana battled back vs. Temple. But it has shown it will buckle if punched in the nose by physical teams. Remember: Wisconsin and Ohio State won in Bloomington. Also, Minnesota pushed around the Hoosiers in Minneapolis. And is Yogi Ferrell ready for this bright March spotlight? Yes, the freshman was spectacular in an NCAA opening win over James Madison, scoring 16 points. But he didn?t score vs. Temple and had three turnovers. He must do more from the point. And, the competition is only gonna get better from here on out.

No. 2 Ohio State vs. No. 6 Arizona in the West
Possible Elite Eight: vs. No. 9 Wichita State-No. 12 LaSalle winner
Why it can advance: Thad Matta is good. Really good, taking OSU to two Final Fours, including last season. In fact, this has become the premier program in the Big Ten. The Buckeyes are on a roll, winning 10 in a row dating to a humiliating 71-49 loss at Wisconsin on Feb. 17. The key during this furious run to the Big Ten tourney title and Sweet 16 has been defense. Pairing Shannon Scott with Aaron Craft has given the Buckeyes a killer defensive backcourt. Deshaun Thomas is, well, Deshaun Thomas, the ?franchise.? And other Buckeyes are scoring with consistency. Lastly, like Indiana, Ohio State may feel like a blessed team after pulling a victory out of the fire on Sunday vs. Iowa State.
Why it could fail: Yes, Thomas is a ?franchise,? but he can be known to take bad shots-a lot of bad shots. If he has a bad game and forces too much, the Buckeyes can struggle mightily to score if complementary players like LaQuinton Ross, Lenzelle Smith, Jr., and Sam Thompson aren?t effective. The post play is spotty-at best. Point production from Amir Williams and Evan Ravenel isn't consistent. And rebounding isn?t always a forte.

No. 3 Michigan State vs. No. 2 Duke in Midwest
Possible Elite Eight: vs. No. 1 Louisville-No. 12 Oregon winner
Why it can advance: The front line has few-if any-peers. Adreian Payne, Derrick Nix and Branden Dawson are a formidable trio that pounds foes. In the first two games, Payne had 21 points and 14 boards; Nix scored 36 points and grabbed 23 rebounds. Dawson?s numbers are down, but he?s an explosive defender who had 12 total rebounds in the first two games. And if Gary Harris keeps shooting well, look out. The freshman off-guard notched 23 points vs. Memphis and 10 vs. Valparaiso. Lastly, MSU has Tom Izzo on its side. The guy knows how to win in March, with six Final Fours and one national title.
Why it could fail: Guard play. Keith Appling, to be exact. Tom Izzo says the junior point guard is good to go after injuring his right shoulder and left knee in separate incidents over the weekend. We shall see. The Spartans need Appling to make good decisions with the ball, limit turnovers and hit some shots. As he goes, so goes Michigan State. In fact, it?s critical for all of the Spartan guards to make some shots from the perimeter. Harris has come out smoking the first two games. That opens room for Nix and Payne. But if the Spartans are clanking shots from the outside, the offense can look ugly. There isn?t a lot of ability to create shots off the dribble, putting an even bigger premium on shooting.

No. 4 Michigan vs. No. 1 Kansas in South
Possible Elite Eight: vs. No. 3 Florida-No. 15 Florida Gulf Coast winner
Why it could advance: Trey Burke. Period. The guy is the nation?s best player who has the ability to single-handedly win a game. It?s what superstars do. And he?s one. Plus, when all else fails-and the shot clock is running down-Burke can create a shot out of nothing. The sophomore is surrounded by myriad perimeter talent. I dare you to find a better collection of shooters than Tim Hardaway Jr., Nik Stauskas and Glenn Robinson III. You can?t. So, don?t try. When these guys are gunning with aplomb, Michigan is very difficult to beat.
Why it could fail: This isn?t a big or physical team. So, rebounding and interior defense can be issues. It just depends on the matchup. And the first two NCAA foes (South Dakota State and VCU) were nice matchups for Michigan. Yes, big Mitch McGary is playing well. But he?s a freshman who can be streaky and foul-prone. Jordan Morgan?s role has diminished since coming back from injury. Is he dialed in? Jon Horford? He?s just a role player. Big, athletic teams can pose big issues for the Wolverines, who need to rebound and defend the post with more consistency to advance.