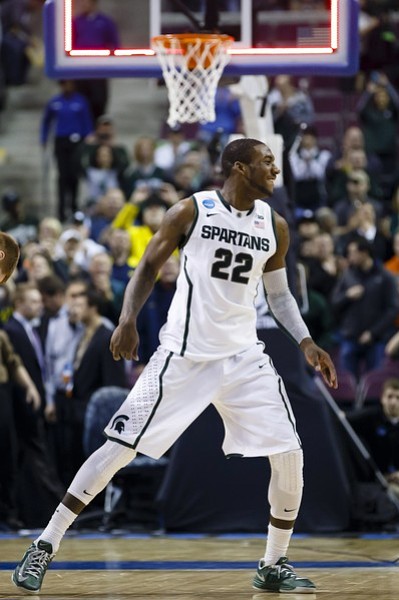 The Big Ten began the Big Dance with seven teams-and has four still standing as we enter the Sweet 16. There is so much to look at in today?s daily links. Let?s start here, with this homage to Big Ten dominance.

It?s all about surviving and advancing in the NCAA tourney. And few teams epitomized that more than Indiana, which escaped defeat vs. No. 9 Temple on Sunday-just barely. What were the lessons learned for the Hoosiers? Terry Hutchens of the Indianapolis Star tells us right here.

Among them, Indiana showed it doesn?t have to score 80 points to win. In fact, the Hoosiers? 58 points were their fewest in a victory all season. And Indiana also showed great toughness in the face of adversity. This was one of those games when things weren?t going smoothly. But Hoosiers like Cody Zeller, Christian Watford and Victor Oladipo, among others, fought through it. Tom Crean? He?s just happy to be advancing on, as Indiana is in back-to-back Sweet 16s for the first time since 1993-94.

Michigan is in the Sweet 16 for the first time since 1994. And it will take on No. 1 seed Kansas. See what the Jayhawks are all about right here.

Michigan?s interior defense hasn?t been stellar, so dealing with Kansas 7-footer Jeff Withey could be tough. And the Jayhawks have a superstar in guard Ben McLemore, but he hit just 2-of-14 shots the first two games. Still, I wanna see him battle Trey Burke/Tim Hardaway, Jr./Glenn Robinson III.

Minnesota?s season is over, ending with a spirited loss to Florida in the third round of the NCAA tourney. Now, speculation on Tubby Smith?s future will gain steam. The sixth-year Golden Gophers coach is slated to soon talk to Minnesota A.D. Norwood Teague.

Marcus Fuller of the St. Paul Pioneer Press says Smith expects to discuss his coaching staff, which may have to be altered. But is Tubby?s future in peril?

?That's the last thing on my mind," he said after the loss on Sunday to Florida. "I always sit down with (the athletic director) after the season. I don't care if it was with Joel (Maturi) or at Kentucky, Tulsa or Georgia. You've sit down and discussed the program, whether it's good or bad. You've got to talk about what you do next or what went wrong or how can we help you."

Illinois has nothing be ashamed of following its loss to ACC champ Miami in the third round of NCAA tourney, says Loren Tate of the Champaign News-Gazette. He?s correct. The Illini came oh-so-close to reaching the Sweet 16 for the first time since a run to the national title game in 2005.

Now, what about next season? John Groce will have to build around Tracy Abrams, Nnanna Egwu, Joseph Bertrand and Myke Henry, as seniors like Brandon Paul, D.J. Richardson and Tyler Griffey are gone. Bottom line: This could be a second-division team next season.

No one expected No. 5 Wisconsin to lose its first-round game to No. 12 Ole Miss. But, it happened. Fear not, Badgers fans: The outlook for next season is bright, according to some.

Time will tell. Wisconsin will lose stalwarts like Mike Bruesewitz, Jared Berggren and Ryan Evans up front. Some real bangers. But next year?s potential starting lineup could look like this: Frank Kaminsky, Nigel Hayes, Traevon Jackson, Sam Dekker and Ben Brust. Not bad. And, we all have learned never to count out a Bo Ryan team, right? A top-four Big Ten finish and NCAA bid are givens. He has spoiled you, Badgers fans.

Yes, Michigan State?s Branden Dawson has scored in single-digits for 10 games in a row. But, he?s still finding ways to contribute.

MSU was carried by Adreian Payne, Derrick Nix and Gary Harris in its first two NCAA games. But Dawson will be needed. His energy, athletic ability, defense and rebounding are valuable-even when he isn?t scoring.

You may not have noticed, but Iowa is in the NIT. And the Hawkeyes have won two games. Up next: a game at Virginia on Wednesday.

The winner will advance to the NIT Final Four in New York. That may not be a big deal to you, but it is to a surging and building Iowa team that is setting itself up for a big 2013-14 season.

He had been a weak-side linebacker. The idea: Give Michigan flexibility and options at linebacker, as it learns to deal without having injured strong-side linebacker Jake Ryan.

PennLive.com is starting a nice spring football breakdown series, looking at each team over the next 11 days. The series begins with a look at 2013 conference favorite Ohio State, which must rehab a defensive line that lost all four starters.

5 of Ohio State's 7 losses this season against teams that made the Sweet 16: Kansas, Indiana, Duke, Michigan State, Michigan.

My take: This is very impressive. Illinois and Wisconsin also beat the Buckeyes.

Beilein says Michigan's D has been "really good" over last two games, have to make shots and then defend to run vs. Kansas

My take: That defensive effort must continue-or Michigan will be doomed.

Groce's response to late call that went to Miami: praised officials then said "You saw the same video I did."

My take: Was it a blown call? Did a Miami player touch the ball as it went out of bounds late in the game? Absolutely. But there were other plays that could have been made by Illinois along the way. I am tired of all the harping about officials. They make errors-just like players and coaches. But officials are expected to be perfect. Nuts.

Big Ten is showing why it was, by far, the nation's best basketball conference. To end discussion, it needs a national champ. Been too long.

Watford and Moye – both from the south, both the No. 2 uniform, both their big blocks could lead to Final 4 in Georgia Dome. #iubb

My take: The symmetry here is amazing.

Pretty clear Miami should have been a 1 seed — Gonzaga goes out early & Canes' worst loss, to Florida Gulf Coast, doesn't look so bad.

My take: No doubt, this was one of the selection committee?s biggest gaffes.

Aside from 1 bad matchup (LaSalle-Wichita), this is about as good as a Sweet 16 can get. Probably 11 of those teams could win it all

My take: I am shaking my head in agreement.