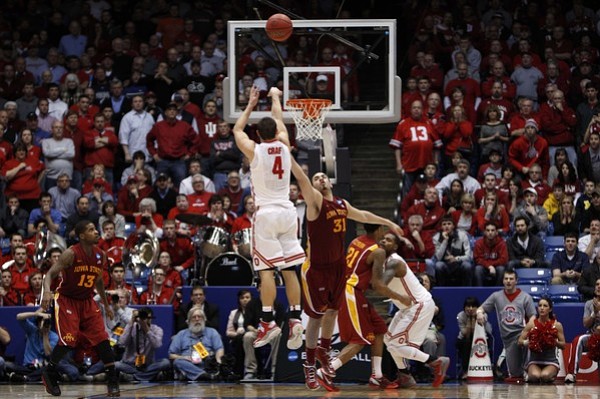 Aaron Craft hit a 3-pointer with a half-second left, and Ohio State escaped Dayton – a place of heartaches – as the lone high seed left in the NCAA tournament's wild West Regional, beating Iowa State 78-75 on Sunday.

No. 2 Ohio State (28-7) needed Craft's only 3-pointer of the game – an arching shot over 6-foot-7 defender Georges Niang from the top of the key – to avoid yet another upset in the West. Four of the top five seeds have fallen fast and hard in that most-busted bracket.

The Buckeyes' 10th straight win sends them into the round of 16 for the fourth straight year, a school record.

FINAL: Aaron Craft hit a 3-pointer with 0.5 seconds left to lift No. 2 seed Ohio State past No. 10 seed Iowa State, 78-75, and to its fourth consecutive Sweet 16 berth. Deshaun Thomas scored a game-high 22 points, Craft chipped in 18 and LaQuinton Ross added 17 to help the Buckeyes prevail in a game that featured 16 lead changes. Ohio State hit 51 percent of its field goals (25-of-49), including 50 percent from distance (9-of-18). Korie Lucious scored 19 points, handed out three assists, shot 6-of-9 from the field, and made 5-of-7 three-pointers for Iowa State (23-12) in the loss. The Cyclones were hot from long range, hitting 12-of-25 threes for a 48 percent night from beyond the arc. The Cyclones pounded the boards hard in defeat as they grabbed 39 to 26 for Ohio State. The victory extends the Buckeyes' winning streak to 10 games.

HALFTIME: In a back-and-forth first half that featured 10 lead changes, Ohio State leads Iowa State, 38-36, at halftime in the West Region quarterfinals. Deshaun Thomas scored 13 points and grabbed four rebounds to lead the Buckeyes, who were outrebounded 25-14. Iowa State fired often and fired with accuracy from distance, hitting 43 percent (6-of-14) of its three-point attempts. LaQuinton Ross and Aaron Craft added seven and six points, respectively, for the Buckeyes. Will Clyburn scored 11 points to pace the Cyclones, who also received five points and eight rebounds from Melvin Ejim.