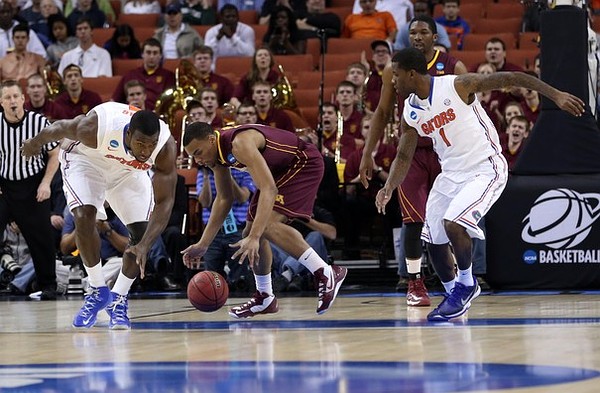 Mike Rosario scored 25 points and Florida used an overpowering first half to roll past Minnesota and into the NCAA tournament round of 16 for third consecutive year with a 78-64 win Sunday in the South Regional.

The No. 3 seed Gators (28-7) shot a blistering 65 percent in the first half and led by 21 by halftime. The win earns Florida a return trip to the Lone Star State to play their next game at Cowboys Stadium in Arlington.

Why Minnesota got beat: Minnesota dug itself too big of a hole-21 points at halftime-that it never was able to crawl out of. Florida shot 56 percent overall (21-of-37) and 50 percent from 3-point range (10-of-20). And the Gators shot 36 free throws, making 26; the Gophers were 16-of-22 from the charity stripe. Minnesota also had just four points from its bench.

Key moment: This game was tied, 10-10, at the 14:58 mark. From there, Florida ran away from Minnesota, outscoring the Golden Gophers 38-17 the rest of the half to take a commanding 21-point advantage, 48-27, at intermission. But Minnesota opened the second half on a 19-5 run to make it 53-46, Florida. But the Gophers never could get any closer, as the valiant comeback came up short.

Key player: Andre Hollins did all he could, hitting 8-of-13 shots en route to tallying a team-high 25 points. The sophomore point man was on fire from 3-point range, hitting 6-of-10. It wasn?t enough.

What?s next: Minnesota finished the season 21-13, losing four of its last five games after finishing 8-10 in Big Ten play. Some still will speculate on Tubby Smith?s future, as many felt he needed to win at least one NCAA tourney game. Well, the sixth-year coach did that. But was it enough? Stay tuned. A season that began with a 15-1 mark and No. 8 ranking went south quickly after an 88-81 loss at Indiana on Jan. 12 and largely was a disappointment.

FINAL: Mike Rosario scored 25 points and Erik Murphy added 15 to lead No. 3 seed Florida past No. 11 seed Minnesota, 78-64, on Sunday at Frank Erwin Special Events Center in Austin in the third round of the NCAA Tournament. Even in defeat, Andre Hollins came through for Minnesota (21-13) with 25 points, five rebounds, 8-of-13 shooting from the field, and 6-of-10 shooting from beyond the arc. Florida (28-7) hit 57 percent of its field goals (21-of-37), including 10-of-20 from deep, and drained 26-of-36 from the free-throw line. The Gators also got a double-digit contribution from Scottie Wilbekin (12 points). The Golden Gophers shot 8-of-18 from three-point range during the game, good for 44 percent. Minnesota, which secured 14 offensive boards, also got double-digit contributions from Trevor Mbakwe (11 points) and Rodney Williams Jr. and Austin Hollins, who each scored 10.

HALFTIME: Mike Rosario scored 17 points and Erik Murphy added 15 to lead Florida to a 48-27 halftime advantage over Minnesota in the South Region quarterfinals. Both Rosario and Murphy were white-hot from the field, combining to shoot 10-of-14, including 6-of-7 from distance. An aggressive offense and the ability to get to the charity stripe allowed the Gators to take a halftime lead. Florida made 11 of 13 free throws. The Golden Gophers went into a funk with the score 24-15, going 3:43 without a point while the Gators went on a 13-0 run to open up a 22-point lead. Andre Hollins scored 11 points to lead Minnesota, which shot 4-of-8 from beyond the arc.