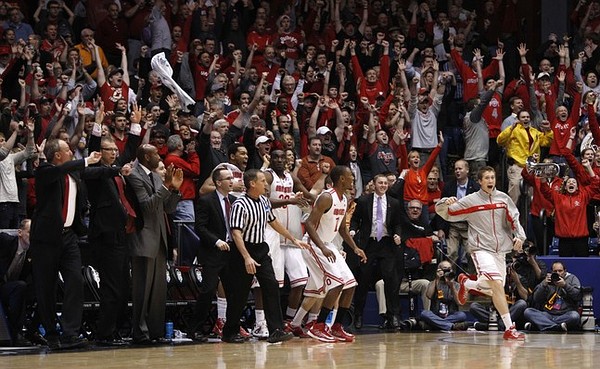 Ohio State is headed to its fourth straight Sweet 16, the program's longest streak and the nation's longest current streak. How did it get there? Simple: Aaron Craft. The junior hit a buzzer-beating trey to make up for a trio of late missed free throws and send Ohio State past Iowa State, 78-75.

Read more about the game:

Why Ohio State won: Despite struggling late from the free-throw line and making some costly turnovers, Aaron Craft remain unmoved as the last few seconds ticked off the clock in a 75-75 game. That?s when the junior guard hit a 3-pointer with 0.5 seconds left to push the Buckeyes to a 78-75 win. Ohio State advances to the Sweet 16 for a fourth consecutive season. The Buckeyes shot well, hitting 51 percent (25-of-49) of their attempts overall and 50 percent from 3-point range (9-of-18). They also made nine steals and forced 16 turnovers, which they time and again converted into hoops to negate Iowa State?s 39-26 edge on the glass.

Key moment: There were two in the final two minutes. With 1:41 left, Aaron Craft took a huge charge call that negated what could have been a three-point play for Iowa State. That play was a huge momentum-changer. Then, of course, the biggest moment of the game – if not the tournament – came on Craft's buzzer-beating trey to break the tie and lift the Buckeyes to the Sweet 16.

Key player: Deshaun Thomas led the way with 22 points; LaQuinton Ross tallied 17 off the bench. But this honor has to go to Craft. He finished with 18 points of 7-of-11 shooting and had six assists and three steals. Plus, one Titanic shot to win the game. Want more? Craft also took a huge charge late in the game that negated an Iowa State hoop and allowed OSU to set up for the winning bucket.

Key number: 19, bench points for Ohio State. Ross led the way with 17, as he continues to break out as an offensive force. The sophomore has a bright future.

What?s next: The Buckeyes will play No. 6 Arizona in Los Angeles in the Sweet 16 of the West Region, which has seen No. 1 Gonzaga, No. 3 New Mexico, No. 4 Kansas State and No. 5 Wisconsin all get knocked out already. The Wildcats dumped No. 11 Belmont and No. 14 Harvard to reach the Sweet 16. Ohio State is in pursuit of a second consecutive Final Four berth.