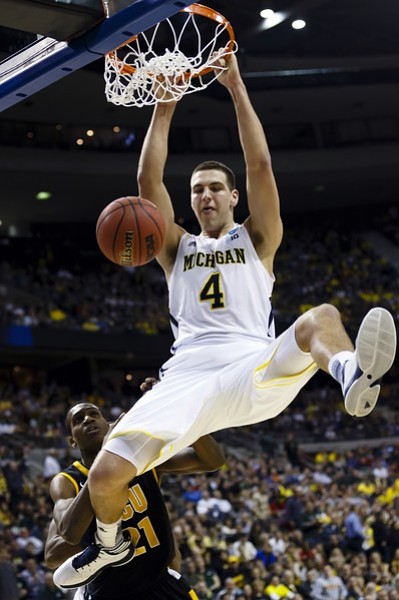 Many experts thought VCU's "Havoc" defense would give Michigan fits. Not so much. The Wolverines, despite committing 12 turnovers, steamrolled the previous Cinderella program, 78-53, en route to becoming the first team to advance to the Sweet 16.

Why Michigan won: The Wolverines? guards deftly handled VCU?s vaunted "Havoc" defense, which led to many easy baskets. That?s why Michigan shot 51 percent. And when the Wolverines missed, they often got the rebound en route to notching a 41-26 edge on the glass. Yes, Michigan had 12 turnovers, but they forced 14 of their own and had 17 assists. This was a textbook game for John Beilein?s Michigan squad, which came in well-prepared. Four Wolverines were in double-figures: Mitch McGary (21 points); Trey Burke (18); Tim Hardaway, Jr. (14); Glenn Robinson III (14). This team is smoking after entering the tourney 3-3 in its last six games.

Key moment: With 2:47 left in the first half, Tim Hardaway, Jr., launched a 3-pointer with a man in his face. It didn?t matter. The junior marksman hit the shot to push the Wolverines ahead, 30-19, on the way to a 38-23 halftime edge. VCU had a quick run to start the second half to get within 10. But Michigan pulled away, time and again breaking the vaunted VCU ?havoc? for dunks and open 3-pointers.

Key player: Mitch McGary. He started a second game in a row. And the results this time were even better. The 6-10 freshman dynamo had 13 points and nine rebounds in an opening victory over South Dakota State. Today, he had 21 points and 14 rebounds, while injecting boundless energy into the lineup starting in place of Jordan Morgan, who has disappeared from the rotation. Perhaps best of all: McGary set a thunderous pick in the first half that had to felt around the world-and set the tone for the game.

Key number: 18, VCU?s shooting percentage from 3-point land (3-of-16). The Rams shot just 39 percent overall. VCU?s defensive pressure isn?t as effective if it can?t set up off of made baskets. VCU scored 53 points after tallying 88 in its NCAA opener vs. Akron. Credit Michigan?s defense, which hasn?t always been stellar this season.

Next: Michigan will play the winner of the No. 1 Kansas vs. No. 8 North Carolina game in the Sweet 16, the Wolverines' first trip to the tourney's second weekend since 1994.