Gophers rise up, knock off UCLA 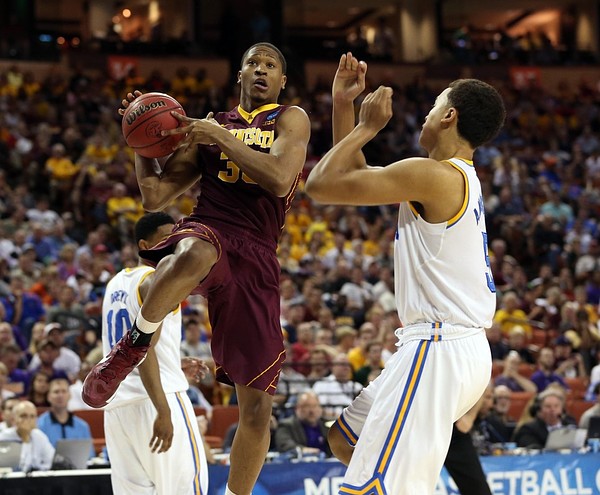 Andre Hollins scored 28 points and Minnesota rolled past punchless UCLA 83-63 on Friday night in the second round of the NCAA tournament, a game that could be Bruins freshman Shabazz Muhammad's last in college and coach Ben Howland's final one leading the program.

Austin Hollins scored 16 for the 11th-seeded Gophers (21-12), who advanced to Sunday's third round against No. 3 seed Florida in the South Regional. The Gophers eased some pressure on coach Tubby Smith by giving him his first NCAA tournament win in six seasons.

FINAL: Andre Hollins scored 28 points, grabbed nine rebounds and handed out five assists as Minnesota defeated No. 24 UCLA 83-63 in an upset on Friday at Frank Erwin Special Events Center in Austin in the second round of the NCAA Tournament. Hollins and Austin Hollins both had solid performances for Minnesota (21-12). Hollins shot 5-of-8 from long range. Hollins had 16 points, contributed seven assists, went 4-of-7 from the field, and went 4-of-6 from beyond the arc.

The Golden Gophers hit 51 percent of their field goals (31-of-61). Minnesota also got a double-digit contribution from Joe Coleman (14 points). David Wear contributed 10 points and corralled six rebounds for UCLA (25-10) in the game. The Bruins shot just 32 percent from the field (20-of-63). UCLA grabbed 23 offensive rebounds. The Bruins also got a solid contribution from Norman Powell (10 points). UCLA lost despite outrebounding the Golden Gophers 47-39.

HALFTIME: Trevor Mbakwe and Austin Hollins combined for a successful first half as Minnesota leads 35-25 over No. 24 UCLA. Mbakwe scored nine points, grabbed five rebounds, and shot 4-of-4 from the field. Hollins scored 11 points, had five assists, and hit 3-of-5 three-point tries. The Bruins led 15-14 when the Golden Gophers went on an 8-0 run to take a seven-point lead. UCLA had 14 offensive rebounds in the first half, leading to second-chance opportunities.

Minnesota hit four threes in the first half, shooting 50 percent from deep. The Golden Gophers played team basketball in the first half, to the tune of 10 assists on 14 field goals. The Bruins' David Wear has nine points and three rebounds.