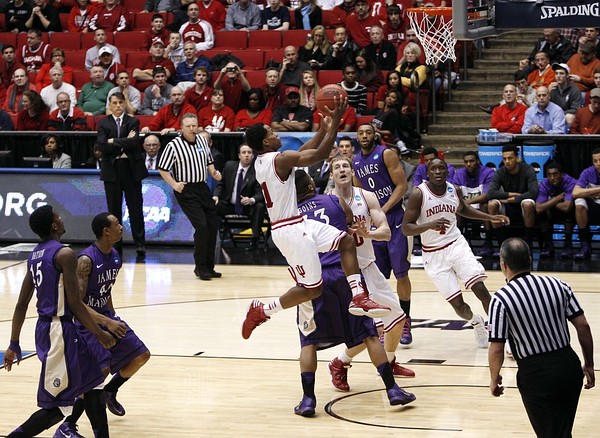 This game basically was over at tipoff, as Indiana outclassed James Madison-which had to win a play-in game to advance-in every facet of the game. It was a nice tune-up for the Hoosiers, who were just 3-3 in their six games entering the Big Dance after getting bounced by Wisconsin in the semifinals of the Big Ten tourney. Indiana shot very well, hitting 52 percent of its shots and 39 percent from 3-point range. And IU dominated on the glass, 40-29.

Key moment: Indiana jumped out to a 9-0 start, with Yogi Ferrell scoring all nine points en route to 14 first-half points with seven rebounds and three assists. The helped propel the Hoosiers to a 43-22 lead at halftime. And Indiana never looked back.

Key player: It has to be Ferrell, who hit 7-of-12 shots for a team-high 16 points. The freshman also had eight rebounds and six assists. He was simply sensational.

Key number: 5, Hoosiers in double-figures. In addition to Ferrell, Cody Zeller had 11 points; Jordy Hulls had 10; Vic Oladipo had 11; Will Sheehey had 15 for an IU team that hit 16-of-21 free throws. James Madison was 2-of-4 from the charity stripe.

What?s next: The Hoosiers will play No. 9 Temple in a in a third-round game on Sunday. The Owls knocked off No. 8 N.C. State to advance.