Quick hit: Illini do it the hard way 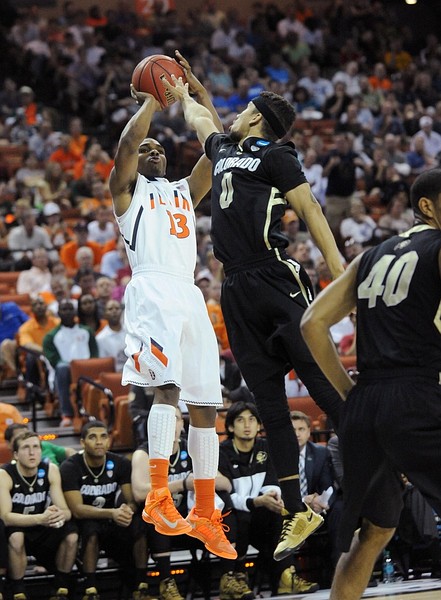 It was defense that boosted Illinois to victory on this day. Illinois was especially stingy in the first half, which it allowed only 21 points and closed the final 7:05 of the half on a 13-0 run to take a 37-21 halftime edge. And the Illini showed an ability to withstand adversity in the second half, squandering a 16-point halftime lead and falling behind 44-39 with 9:00 left. But Illinois stayed composed and regained the lead, finishing the game on an 18-5 run.

Key moment: Illinois missed it first 10 shots of the second half, as CU opened the second stanza on a 23-2 run to surge ahead, 44-39. It was the Buffs? first lead since a 17-16 advantage. Illinois missed its first 14 shots of the second half, not connecting until 8:33 remained. Then, Illinois regrouped and took a 45-44 edge with less than seven minutes left. D.J. Richardson hit the big shot to push Illinois back in front, knocking down a 23-foot 3-pointer at the 6:32 mark. Illinois never trailed again.

Key player: Brandon Paul fought through an off night, hitting just 3-of-12 shots. But he kept plugging and finished with a team-high 17 points. D.J. Richardson was the star in the first half while Paul struggled, finishing with 14 points and hit that huge shot to put Illinois back in front in the second half.

Key number: 13, points for Illinois point man Tracy Abrams. He was quietly effective, dishing out six assists with a block and two steals for an Illini team that was outscored, 28-20, in the second half.

What?s next: Illinois will take on No. 2 Miami (Fla.) on Sunday in the third round. The Hurricanes, who some feel could have been a No. 1 seed after winning the ACC regular-season and tourney titles, knocked off Pacific in their first game.