Wolverines move on with 71-56 tourney win 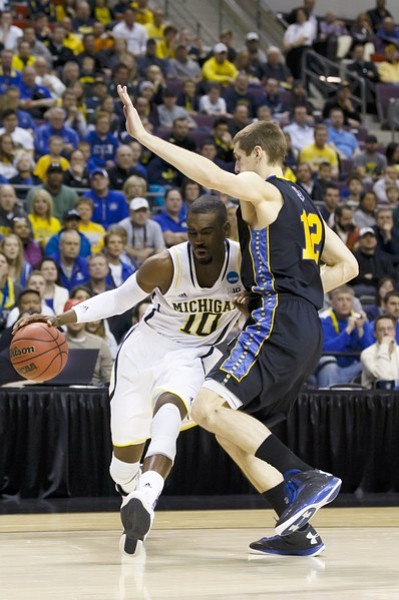 Burke made only two field goals and left the game briefly in the second half after a hard fall under the basket. The star point guard came back after that, but he finished with only six points. Burke was held in single digits for the first time all season. See the full box score here.

FINAL: Glenn Robinson III scored 21 points and grabbed six rebounds and Tim Hardaway Jr. added 21 points and four boards as they teamed up to lead No. 10 Michigan to a 71-56 victory  over South Dakota State on Thursday at The Palace of Auburn Hills in Auburn Hills in the second round of the NCAA Tournament. South Dakota State (25-10) fell short on the scoreboard, despite the efforts of Brayden Carlson.

Carlson scored 20 points, grabbed eight rebounds, dished out four assists, and went 8-of-12 from the field. Michigan (27-7) shot 51 percent from the field (28-of-55). The Wolverines were hot from long range, hitting 9-of-20 threes for a 45 percent night from beyond the arc. Michigan also got a double-digit performance from Mitch McGary (13 points). Tony Fiegen had a quality shooting game, nailing 6-of-6 shots from the field and scoring 12 points. The Jackrabbits also got double-digit games from Nate Wolters (10 points) and Jordan Dykstra (12 points). Powered by Narrative Science.

HALFTIME: Brayden Carlson's been a spark for South Dakota State, but the Jackrabbits trail No. 10 Michigan 30-26 at the break. In the first 20 minutes, Carlson scored 16 points, grabbed three rebounds, and shot 6-of-8 from the field. The Wolverines led 7-2 when South Dakota State went on an 11-0 run to take a six-point lead. Michigan's leading scorer, Trey Burke, has been shut down thus far. Sitting with two points, the sophomore is far below his 19.2 per game average this year.