Today's links: Tourney time for all 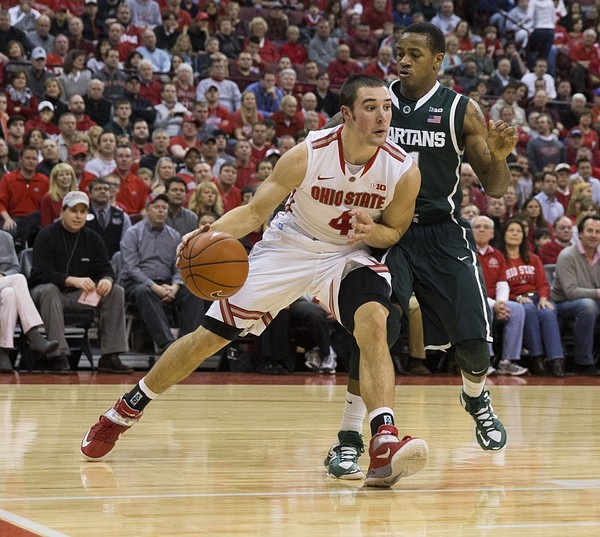 Welcome to one of the greatest days on the sports calendar! Where to begin? How about here, with Ohio State, one of my Final Four picks? When you think of Ohio State?s sprint to the NCAA tourney, ripping off eight victories in a row, you think of an offense that has featured a steadier stream of contributors around Deshaun Thomas. But defense has been the catalyst. And one of the biggest defensive sparks has been provided by Shannon Scott.

The backcourt tandem of Scott and Aaron Craft has been formidable. Doug Lesmerises of the Cleveland Plain Dealer points out that in the past eight games — compared to the previous eight — Scott's minutes have increased from 16.3 to 23.9 per game, his steals from 1 per game to 2.7 and his assists from 2.1 to 4. And, the Buckeyes have soared to a No. 2 seed in the West with a good shot at a second consecutive trip to the Final Four.

Yes, the NCAA tourney begins in earnest today. But Iowa and Purdue already have opened play in other postseason tourneys-and done well. The Hawkeyes dumped Indiana State in the NIT behind the security blanket that is Roy Devyn Marble and will now face Stony Brook on Friday.

The Boilermakers whipped Western Illinois in the CBI behind A.J. Hammons? 15 points and will now face Santa Clara on Monday.

This is EXACTLY where both of these schools belong, young teams that need to play more games as they build toward promising 2013-14 seasons.

It?s no secret: Michigan State will go as far as Keith Appling takes it. The good news: The junior is more receptive to criticism than in the past.

Appling let his clash with Ohio State pest Aaron Craft get personal in the Big Ten tourney. Appling knows he can?t let stuff like that happen again-or MSU?s stay in the Big Dance may be brief.

This Illinois guard Brandon Paul?s last shot a big NCAA success. To survive and advance, Paul must shoot well. D.J. Richardson, Joseph Bertrand and Tyler Griffey ALL must shoot well. If they do, the Fighting Illini can be dangerous and make a run. If not ?

Jeff Potrykus of the Milwaukee Journal Sentinels says that Evans entered the Nebraska game Feb. 26 shooting 40.5 percent from the line (51 of 26). Beginning with a 2-for-2 effort against Nebraska, Evans has hit 11 of his last 19 attempts (57.9 percent). That number is far off his mark of 72.6 percent from last season, but Evans no longer is a liability late in games. Even more vital: Evans is aggressive around the hoop, not afraid of being fouled and getting sent to the free-throw line.

Interesting read on the powerful coaching in the Big Ten by Patrick Reusse of the Minneapolis Star Tribune.

Reusse wonders about the future of the Gopher program under Tubby Smith, noting the coaching competition is fierce. Is Smith the right guy for the job? Does he have enough left in the tank? Does Tubby need to beat UCLA in the first round of the Big Dance to keep his job? It?s all fascinating.

You knew it was coming, you knew SOME team was gonna have a key player suffer an injury this spring. The first: Michigan linebacker Jake Ryan.

The best-case scenario for Ryan is he?ll be out at least half of the coming season. Kyle Meinke of MLive.com notes that Michigan already has the fewest number of returning starters in the Big Ten. The Wolverines are now dealing with the loss of their best defensive lineman in Craig Roh, best defensive back in Jordan Kovacs and now best linebacker in Ryan, who led the squad in tackles. Cam Gordon must step up.

The great Steven Sipple of the Lincoln Journal Star doesn?t think an East-West division split necessarily is best for Nebraska.

Reports of a West division including Nebraska, Minnesota, Iowa, Wisconsin, Northwestern, Illinois and Purdue/Indiana concern Sipple-and others-because it?s not a strong collection of football powers. Sure, the division may be easy to win for the Huskers. But how would not having regular games with Ohio State, Michigan and Penn State impact attendance at Nebraska?s newly expanded Memorial Stadium? And how would that impact strength of schedule, a likely key factor in a coming playoff selection format?

Athlon?s has a nice list of five Big Ten players to watch in spring drills. I would have added Michigan State quarterback Andrew Maxwell. Is he gonna keep his job?

So who does everyone have in their Final Four? I've got two Big Ten teams (IU and OSU) and two Big East (Louisville and Georgetown)

My take: I have Duke, Ohio State, Florida and Indiana.

Today's motto..Skip work..watch the tourney..if you get fired you weren't any good at the job anyway..

My take: This is just beautiful.

There really is no better 2 days in sports than the first Thursday & Friday of the NCAA Tournament. If there is, it must be pretty damn good

My take: This is indeed true.

The Minnesota writers I spoke with say Tubby Smith needs to win 2 NCAA Tournament games to save his job. That would be UCLA, Florida. #dechr

The John Beilein opponent hype machine is in overdrive. Sounds like South Dakota St could make the Eastern Conference playoffs.

My take: This is what happens when there?s too much time for analysis.

Michigan is 17-1 when Glenn Robinson III scores at least 10 points.

As of Monday Nebraska has sold 34,600 tickets to their April 6 Red-White game. #Huskers

My take: This says it all.