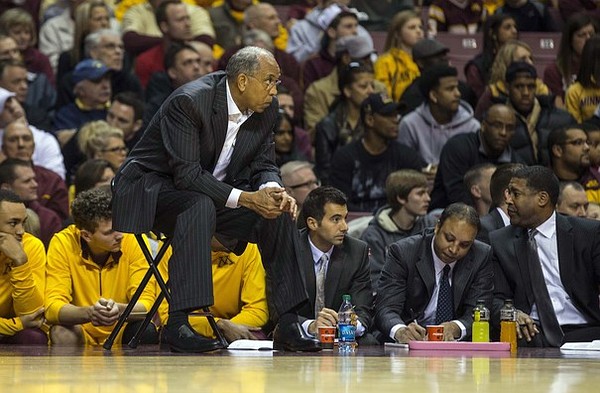 It has become an annual spring rite: President Obama filling out a NCAA bracket. And he has two Big Ten teams in his Final Four: Ohio State and Indiana. There is no better place to start daily links on the eve of the NCAA tournament.

WIN ONE FOR TUBBY: The Minnesota players don?t live in a bubble. They have heard the chatter about their coach, Tubby Smith, being under pressure. They know a win over UCLA in their first game of the NCAA tourney would go a long to relieving some of the pressure on Smith. For the record: Tubby is 0-2 in the NCAA tourney as Minnesota coach.

To that end, the Gophers are a trendy pick over the Bruins, who will be without one of their top players. Minnesota?s physicality may be too much for UCLA. Still, the Gophers are in the midst of a three-game losing skid as the Big Dance dawns. Where?s the mojo?

MARBLE WILL BE BACK: Last summer, Iowa star Roy Devyn Marble discussed the notion of turning pro after his junior. But, that?s not gonna happen. The Hawkeye 1,000-point career scorer recently shot down the notion and will be back for his senior season.

This, Herky, is great news for an Iowa team that will be loaded next season. In fact, it may be a favorite to win the Big Ten. And, if you can believe this: The Hawkeyes haven?t won the league since 1980.

IZZO TIME: Yes, Michigan State is just a No. 3 seed. But history says the Spartans typically always have a good shot at succeeding in March.

In fact, Tom Izzo?s last three Final Four teams-2005, 2009, 2010–all entered the Big Dance amid low expectations-just like this season?s edition. Do you see where I am going with this?

The Huskers were the only team to finish in the top 100 of the RPI with a losing record in 2012-13. That?s good, people. Next year? It could be good. Fans will look for Nebraska to take another step-more victories and a trip to, say, the NIT, perhaps? Sure! Tim Miles doesn?t mind the expectations.

WHAT'S UP, DOC? Speaking of Nebraska: Remember Doc Sadler? Sure you do! He was the hoop coach at Nebraska who was fired after the 2011-12 season. Well, he?s doing fine as director of basketball ops at Kansas. But, he?d like to be a head coach again someday. Maybe at ? Texas Tech?

WELCOME TO THE CBI: Purdue is the first Big Ten team to play in the CBI, opening play tonight at home vs. Western Illinois. But this isn?t about firsts; this is about the Boilermakers taking the first steps toward what many feel could be a successful 2013-14 season for a young team that suffered growing pains this season.

I think Matt Painter is smart for playing in this event because of that. This isn?t about pride-it?s about player and team development.

LEWAN WHISPERS: Michigan offensive tackle Taylor Lewan shocked many when he opted to return for his senior season-including many ?fans.? To that point, he recently was called an idiot by an old lady at a Kroger for turning down millions to come back to Ann Arbor. You can?t make this stuff up, people.

The plan: Get Hall in motion into the backfield and run the ball, and also to catch passes as a receiver–not just as a check down option as a running back catching it out of the backfield. Think Percy Harvin.

REPORT FAVORS BADGERS: A new divisional alignment reported by ESPN.com would be favorable for Wisconsin, putting the Badgers in the West division with border rivals Iowa and Minnesota.

I like this. Sports are all about rivalries. And proximity is typically what makes rivalries great.

DON'T TELL HIM HE'S A TRUE FRESHMAN: Incoming hot-shot Penn State quarterback recruit Christian Hackenberg is preparing to battle for the starting job when he arrives.

This is no shock. We only have been hearing about Hackenberg since forever. He?ll arrive in State College as one of the most hyped incoming quarterbacks in the nation. And, given the Nittany Lions? issues at quarterback, Hackenberg seemingly would have a good chance to win the job as a true freshman.

In fact, if he doesn?t win the post, I will be shocked.

MINNESOTA BEER SALES: The first year of alcohol sales at Minnesota?s TCFBank Stadium were a money loser. This, despite charging $7.25 per beer. Yes, I am as stunned as you.

Nice talk with #Badgers G Josh Gasser. On pace for drill work in summer but not full contact till October.

My take: This is great news for Wisconsin. But, I will say: The Badgers have done much better than I anticipated without him.

My take: This kid is going to be good at a position of great need for Ohio State.

Jim Delany says in court filing that Big Ten might become D-III if athletes get cut of TV revenue. I don't believe him.

My take: Neither do I. I have to think university presidents with multi-million dollar facilities would have something to say about this.

New Purdue football coach Darrell Hazell is serious about creating a buzz about his program. He's opened up spring practices to the public.

My take: When interest is waning, what does Purdue have to lose? Or hide? There are no secret schemes installed in the spring.