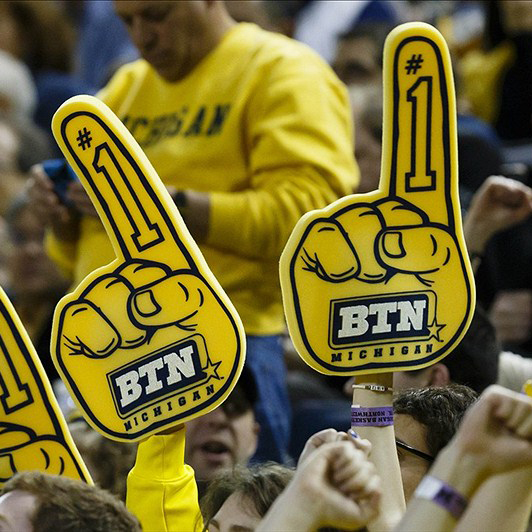 Michigan guard Trey Burke is focused on the here and now, trying to net his first NCAA tourney win after the Wolverines were dumped in the first round of the Big Dance last season by Ohio. But Burke was asked where he?ll be playing next year. His answer: ?I don?t know.? Let's kick off daily links right there.

Well, a good bet is it will be in the NBA, as Burke is projected to be a high first-round pick. Heck, he almost left Ann Arbor after last season.

In case you were wondering, here?s the official 1-68 seeding of NCAA teams. Where is your school? I still am surprised Indiana is only a No. 3.

The great Mike Hlas of the Cedar Rapids Gazette says the NIT didn?t even give NCAA-jilted Iowa a break, dealing the Hawkeyes a No. 3 seed. The nerve.

Hlas points out that while the NIT was fun last year for a rebuilding Iowa squad, it will only be enjoyable for Iowa this season if it wins its way to New York for the Final Four. Which it certainly could, by the way. At the least, it?s nice to see Iowa fans are embracing the NIT opener at home vs. Indiana State on Wednesday, with 10,000 tickets already sold.

You have to see this video of legendary Minneapolis Star Tribune columnist Sid Hartman doing the Harlem Shake (Gophers style). And Hartman thinks the Gophers have the talent to make a run in March. It could happen. In fact, it seems Minnesota is a trendy pick to beat UCLA in the first round.

Go figure. This team has lost three in a row and seven of its last 10 games. Not sure where all of this new-found faith is coming from.

Fun read here in a Q&A from Grantland with Dan Dakich on when he was asked to guard Michael Jordan back in the day.

No Big Ten NCAA team has a more interesting foe than Ole Miss? Marshall Henderson, who likes to shoot off his mouth. And, with the way he carried the Rebels the SEC tourney title, Henderson has had reason to run his yapper.

Enjoy the show, Badgers fans. Henderson is a polarizing force. You?ll either love him or hate him.

Illinois should go ahead and dream big in the NCAA tourney, says Loren Tate of the Champaign News-Gazette. Why not? It?s a new season. The folly and foibles of the season are in the rear-view mirror. It?s a new beginning. And the possibilities are limitless.

Yes, the NCAA tourney is on our doorstep, but spring football continues to percolate. Here?s a nice photo gallery of the first day of Penn State spring football practice.

And yes, everyone in East Lansing is jacked about the NCAA tourney, but spring football is on the minds of Spartans fans, too. In fact, as Graham Couch of the Lansing State Journal points out, the battle at quarterback will be interesting.

Couch points out that MSU needs a tailback, a fullback, tight end, kicker and second cornerback. It has two new offensive coordinators and two lines that underperformed last season. But settling the quarterback spot is a top priority. Redshirt freshman Tyler O?Connor, sophomore Connor Cook and senior Andrew Maxwell will get equal reps. Stay tuned. This could be interesting for an offense that struggled mightily last season. And here are five things to watch for in MSU spring drills.

Everyone knows Nebraska?s defense needs help. Lots of help. The linebacking corps is a major area of emphasis. And it?s hoped David Santos can play a big role at middle linebacker with Will Compton gone. Santos is a sophomore who was a reserve weak-side linebacker last season. The kid is very promising.

Steve Sipple of the Lincoln Journal Star says if Nebraska were to start the season this week, the linebackers likely would be Santos, flanked by junior Zaire Anderson at the weak-side spot and redshirt freshman Thomas Brown on the strong side. Santos' experience, coupled with his athletic ability and instincts, make him a logical choice in the middle. He needs to be a stud.

It looks like the outcry over some of the new recruiting rules passed recently has been heard, as two changes passed have been dropped.

The board decided to shelve new legislation that deregulated which staff members can perform recruiting tasks and what printed materials can be sent to recruits. But there are no plans to drop changes to rules regarding how recruits can be contacted and how often they can be contacted. But, stay tuned.

Tim Miles said it was "collective discussion" between coaches, players & administrators to not participate in CBI, which did have interest.

My take:I still don?t think this is a smart decision. Would Nebraska have turned down an NIT bid? I bet not.

My take: This just isn?t right.

My take: This, no doubt, is impressive. Now, the REAL season begins. Can the Big Ten win its first NCAA title since 1999-2000? I like the chances of Indiana and Ohio State the most.

Victor Oladipo, Cody Zeller give Indiana 2 All-Americans in the same year for the 1st time since 1976 (Scott May, Kent Benson). #iubb

My take: It has been too long for a program of this ilk.