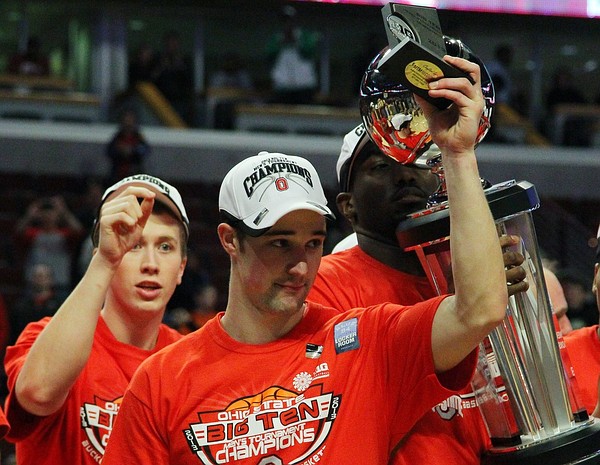 Ohio State won the Big Ten Tournament this weekend, the fourth time that Thad Matta?s team has taken home the crown. While the Buckeyes won largely on the strength of its defense-holding Wisconsin to under 0.8 points per possession-this Ohio State team has been offensively excellent over the back half of its Big Ten schedule:

We know the Buckeyes have a great defense, but the one-dimensional nature of this team limited its ceiling. But now that Ohio State is starting to score in bunches, it?s time to raise the level of expectations: this team is a legitimate Final Four-indeed, National Champion-contender. What?s been key for this Buckeye team is whether or not it gets a second scorer to pair alongside Deshaun Thomas? steady offense. During the Big Ten Tournament, that second scorer was largely Tournament MVP Aaron Craft. But in other games, it?s been Lenzelle Smith or Sam Thompson, or even Shannon Scott. On a game-by-game basis, I don?t think anyone knows who is going to step up and take some of the scoring load off of Thomas, but as long as someone continues to do so, this is as dangerous a team as there is in March.

Wisconsin played very well this weekend, taking down both Indiana and Michigan, but I think we also got a preview of what will happen to this team in the NCAA Tournament. As we?ve said before in this space, Wisconsin is a three-point shooting team that can?t shoot particularly well. Against Indiana and Michigan, the Badgers were hot and made over 35 percent of their threes. Against Ohio State, they were 3 of 18. When the shots fall, Wisconsin can beat anyone. But the shots aren?t falling as often as they need to be for this team to make a deep Tournament run.

(The dichotomy of Wisconsin?s offense and defense-the Badgers love to shoot 3s, but they don?t allow opponents to take any-makes me wonder how they would play against themselves. This year, with such a terrific defense, the score might end up 14-12 in such a hypothetical game. And would you have Ryan Evans guard himself? Probably not, right?)

It?s a good thing there?s no cheering allowed on press row, however, as every journalist outside of Madison is probably rooting for Mississippi in the first round, simply to sustain college basketball?s greatest quote machine, Marshall Henderson.

Indiana did not get the top overall seed in the Midwest, but after looking at that region, that?s probably good news for the Hoosiers. That region has 3 top-10 Pomeroy teams, whereas Indiana?s region has just one-Indiana. It?s easily the softest region for a top seed. Miami obviously could give the Hoosiers some trouble, as the Hurricanes don?t foul very often and control the defensive glass, but that?s a long ways off. Indiana still looks like a great bet to make the Final Four.

Michigan State ended up with a nice draw as much, inasmuch as the Spartans are far, far away from the turnover-forcing ways of VCU. Duke might be more of a challenge if the Blue Devils were still playing Mike Kryzyzweski?s ball-hawking pressure defense of the 1990s, but these days Duke is really just trying to run teams off the three-point line (and doing so very well, I might add), but that?s not a huge aspect of Michigan State?s offense. Duke is no pushover, of course, but they?re not a team against whom MSU is uniquely disadvantaged.

Michigan will first have to take care of business against Nate Wolters and the Jackrabbits of South Dakota State. If you haven?t seen Wolters play yet this season, you?re in for a treat. There might not be a better point guard matchup over the entire Tournament. This game should also be high scoring, as both teams lean heavily to the offensive side. Assuming the Wolverines get past the first round and face VCU in the second, I expect Trey Burke to make quick work of the Havoc defense. Frankly, the merits of Shaka Smart?s defensive system have been far overstated (the team ranked 6th in the A-10 in defensive points per possession), and so long as a team takes care of the ball (something Michigan is excellent at doing), scoring on the Commodores has not been a problem for just about anyone this season. VCU can score as well, though, particularly from long range.

Minnesota is going to have a tall task against a really talented UCLA team. Shabazz Muhammad might be the #1 overall pick in the draft this summer, and Jordan Adams might be a first round pick if he leaves as well, which I guess is as much an indictment of this team as it is a compliment. Though UCLA went 13-5 in the Pac-12, remember that the Pac-12 ranks just 5th among conference nationally by Pomeroy rating. Also, the Bruins? conference efficiency margin was just +0.04, meaning this team was more like an 11-7 team that won a couple extra close games. And finally, UCLA was the worst defensive rebounding team in the Pac-12, and second-worst on the offensive glass. That?s music to the ears of Tubby Smith, who still has the best offensive rebounding team at his disposal (and paradoxically, one of the worst defensive rebounding teams). In other words, UCLA can?t hurt the Gophers on the offensive glass, but Minnesota should be able to get plenty of second chances.

Finally, Illinois opens play against Colorado. With this Illinois team, it?s all about whether or not the Illini are making their frequent three-point attempts. The good news is that Colorado is not a particularly good perimeter defensive team, so the open looks should be there.

All in all, I think this was about as good a draw as the Big Ten was going to get. Let?s see if they?ll capitalize.