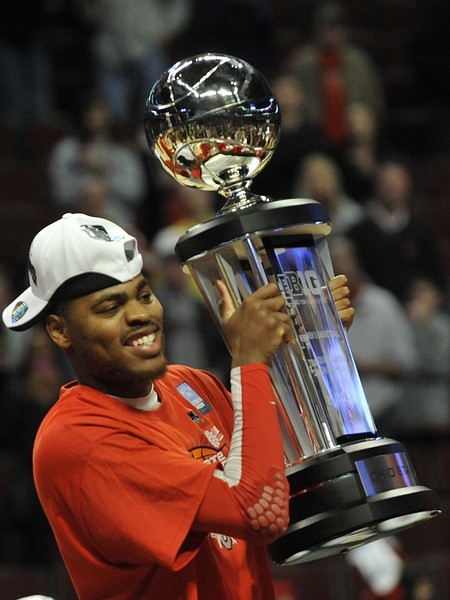 DeShaun Thomas scored 17 points and No. 10 Ohio State used its stout defense to beat No. 22 Wisconsin 50-43 on Sunday for the Big Ten tournament title. Thomas was 6 for 19 from the field, but made some big free throws down the stretch to lead the Buckeyes to their fifth tournament title in nine appearances. Aaron Craft had nine points and six rebounds, and LaQuinton Ross also delivered a couple of huge plays for Ohio State (26-7).

Flip over the BTN/BTN2Go at 7 p.m. when BTN/BTN2Go airs ?The Big Ten Basketball and Beyond Selection Sunday Special,? a 90-minute show looking at the Big Ten?s NCAA tournament selections.

FINAL:  Ohio State held No. 22 Wisconsin to 18-of-47 shooting, as defense led the Buckeyes to a 50-43 victory on Sunday at United Center in Chicago in the Big Ten Tournament Championship.

Ohio State (26-7) held Wisconsin (23-11) to 38 percent shooting from the field and hauled in 27 defensive boards, while only allowing six offensive rebounds.

The Buckeyes went into the locker room with the momentum and came out of the second half flying as well. Ohio State trailed 24-15 with 3:01 left in the first half, but went on a 14-3 run over the next 7:03 to take a two-point lead.

Aaron Craft picked up the offensive burden for the Buckeyes, finishing with nine points and six rebounds.

Sam Thompson was 4-of-6 from the floor and chipped in eight points for Ohio State. The Buckeyes shot just 38 percent from the field (20-of-52). Ohio State got double-figure scoring from Deshaun Thomas (17 points).

The Badgers got double-digit efforts from Traevon Jackson (10 points).

The Buckeyes won the rebounding battle en route to victory, pulling down 40 boards to 28 for Wisconsin. The Badgers trailed 13-6 with 11:57 to go in the first half, but an 18-2 run allowed them to take a nine-point lead late in the first. Ryan Evans finished the run off with a field goal, which helped Wisconsin lead 24-23 at halftime. The victory extends Ohio State's winning streak to eight games.

Wisconsin made eight of 15 two-point shots in the first half, but shot 2-of-10 from beyond the arc. Seven Wisconsin players have scored. Ohio State's Aaron Craft has four points and four rebounds. Frank Kaminsky helped the Badgers with five points

Sam Thompson dunks in the first half.

BTN.com offered something new for the 2013 Big Ten Men?s Basketball Tournament - deeper live box scores provided by Stats LLC. See these box scores in action throughout the tournament for all games. The box scores include speed & distance, rebounding percentages, and secondary assists, among other new items. Use the links below to find the stats and the link to watch archived post-game press conference via the Big Ten Digital Network: