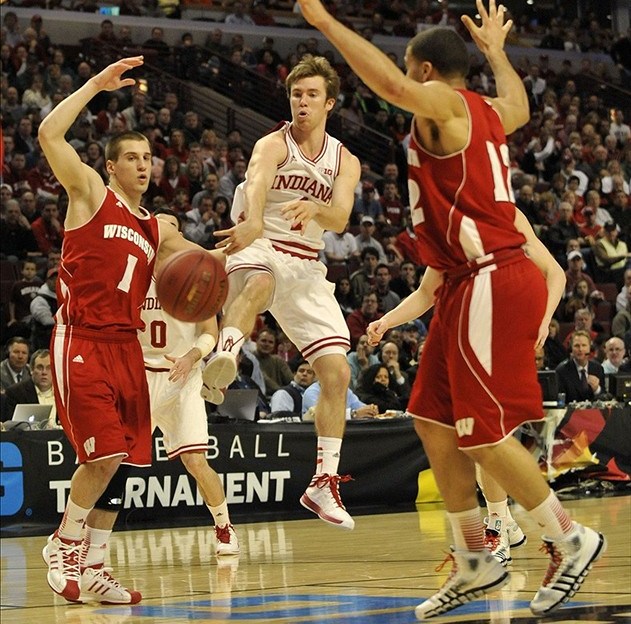 Ryan Evans scored 16 points to help Wisconsin upsetIndiana 68-56 in the semifinals of the Big Ten tournament Saturday. The Badgers allowed only seven points after the top-seeded Hoosiers pulled within one with 9:45 left. They earned their 12th consecutive win against Indiana, tying a record for any school against the powerhouse program, and will play Ohio State or Michigan State in Sunday's final.

FINAL:  Ryan Evans scored 16 points, grabbed eight rebounds and handed out four assists to lead No. 22 Wisconsin to a 68-56 upset win over No. 3 Indiana on Saturday at United Center in Chicago in the Big Ten Tourney.

Sam Dekker was 5-of-8 from the floor and chipped in 11 points for Wisconsin (23-10). The Badgers hit 51 percent of their field goals (25-of-49). Wisconsin was hot from long range, hitting 7-of-18 threes for a 39 percent night from beyond the arc. The Badgers also got double-digit contributions from Jared Berggren (11 points) and Ben Brust (12 points).

Cody Zeller scored 13 points and grabbed 11 rebounds for Indiana (27-6) in the loss. Christian Watford had a quality shooting game, nailing 5-of-9 shots from the field and scoring 14 points. The Hoosiers had trouble finding their touch, shooting just 39 percent (21-of-54) from the field. Indiana was able to secure 15 offensive boards. More Indiana scoring came from Victor Oladipo (10 points).

Brust makes a steal and sinks a three.

Berggren dunks off the pass.