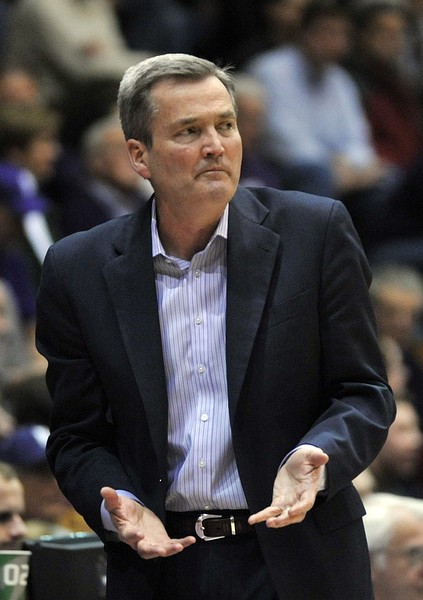 Bill Carmody hasn?t gotten Northwestern to the NCAA tournament in 13 seasons on the job. And, he won?t get a 14th try. Today, the school announced Carmody won?t be back. I?m sure it was a difficult decision. But, it was the correct decision.

Carmody had more than enough time to figure it out in Evanston. So, when NU announced that Carmody was out, it was no shocker.

I know all about the tough hand Carmody was dealt this season, with key injuries to Drew Crawford and Jared Swopshire and the suspension of JerShon Cobb. But at some point, the excuses have to stop. Being a nice guy gets a fella only so far. At some point, results are required. And they just weren?t there for Carmody along the lakefront.

Carmody arrived in Evanston amid much promise with his famous ?Princeton? system. Well, it worked-sometimes. But, not nearly enough. He built the Northwestern program into respectability, walking the Wildcats to the threshold of the NCAA tournament. But he never was able to cross it in 13 seasons in Evanston.

So, Carmody is out after a year that dawned with promise but ended in a 13-19 heap that looked frightening similar to the horrific seasons Northwestern fans came to expect from coaches like Rich Falk, Bill Foster, Ricky Byrdsong and Kevin O?Neill. NU finished 10th in the Big Ten with a 4-14 Big Ten record, losing to Iowa in the first round of the Big Ten tourney to extend the Wildcats? season-ending losing skein to nine games.

Carmody took Northwestern to four NITs in succession (2009-12), leading the program to two 20-win seasons and notching eight Big Ten victories in a season on three occasions. His 2003-04 team went 8-8 in conference play, the only non-losing Big Ten record of the Carmody era. Not bad. But, not good enough.

The dubious NCAA tourney-less streak is especially vexing when you consider similar schools like Stanford, Vanderbilt and Duke all have had big success at various times in the past 25 years. Duke is a gold-standard program nationally, Stanford has reached the Final Four and Vanderbilt has reached myriad NCAA tourneys and even ranked No. 1 in the nation at one point in the 1990s.

But Northwestern? It watches, waits and wonders if it ever will break through to the Big Dance.

Making the riddle of NU hoops more vexing is NU football, which has enjoyed much more success in a sport that is much more difficult to build and sustain. Nonetheless, the Wildcats continue to prosper and flourish under the stewardship of Pat Fitzgerald. NU has been to five bowls in a row and is coming off its first bowl win since the 1948 season.

Meanwhile, the Northwestern hoop team has its face pressed against the glass, peering into the NCAA tourney.

No doubt, the next Northwestern coach will be expected to deliver that elusive NCAA bid. Many names are being mentioned. The favorite could be Chris Collins, a Duke assistant since 2000. The former Blue Devil player is the son of Philadelphia 76ers coach Doug. And Chris Collins is a native of Northbrook, Ill., a Chicago suburb-for what that?s worth. Hey, Fitzgerald is a local kid.

Whoever takes over Northwestern will inherit a roster loaded with veteran talent. Crawford (shoulder injury) and Cobb (academics) will be back as the centerpieces. Also back will be point guard Dave Sobolewski, center Alex Olah, forward Kale Abrahamson, guard Tre Demps, among others.

There will be much to build on next season and beyond, thanks to the foundation laid by Carmody. Until then, Wildcats basketball remains nothing more than hope and promise.